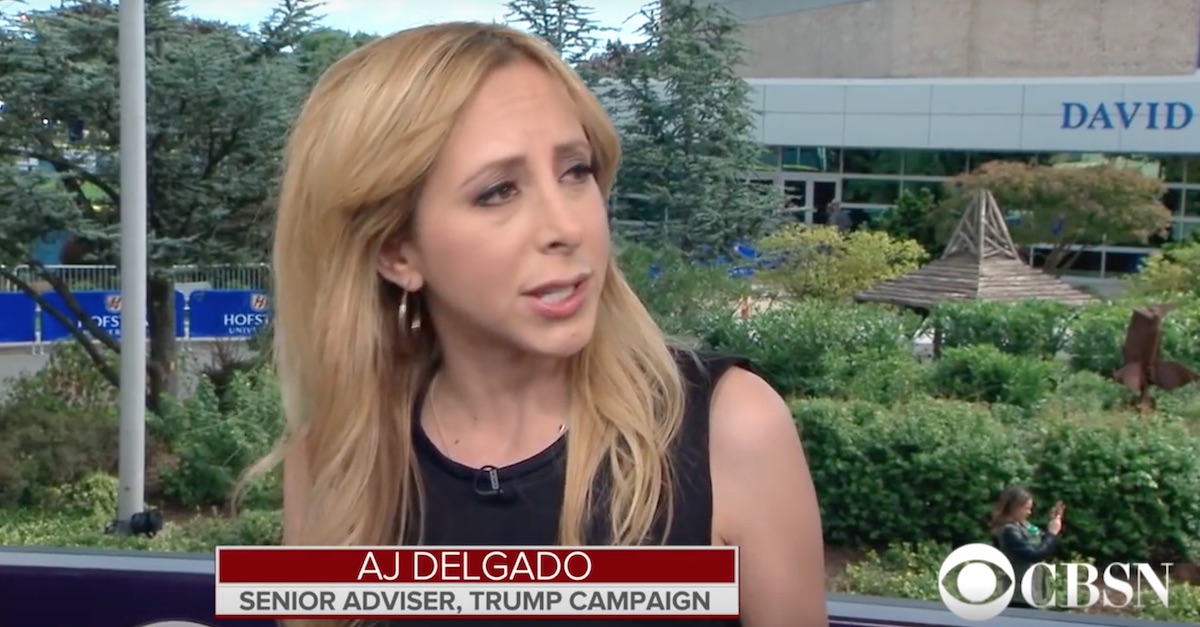 A former Trump campaign and transition team staffer is suing President Donald Trump and the Trump campaign, alleging she was the victim of pregnancy and sex discrimination.

In a lawsuit filed in Manhattan federal court Monday, former senior campaign advisor (and former Mediaite columnist) A.J. Delgado claimed she had an affair and was impregnated by her supervisor, senior communication advisor Jason Miller, according to a Politico report. Delgado alleges that the campaign took adverse action against her soon after she informed senior officials of her pregnancy. The complaint names President Trump, the Trump campaign, Trump’s transition organization, Trump for America, Sean Spicer, Steve Bannon, and Reince Priebus.

“Immediately after Plaintiff Delgado announced her pregnancy, the Campaign and TFA, including Spicer, Bannon and Priebus, Plaintiff’s supervisors, stripped Plaintiff of her job responsibilities and duties throughout for the remainder of her employment from late December of 2016 and through the Inauguration in late January of 2017,” Delgado alleges. “Plaintiff immediately and inexplicably stopped receiving emails and other communications from the Campaign and TFA, including about projects on which she was currently working.”

“Plaintiff was excluded from participating in the communications work of the Inauguration or in any capacity, even though she was still formally part of the Communications Transition team,” the suit continues.

Miller was initially slated to fill the role of White House communications director before withdrawing from the position after it was revealed that he had an affair with Delgado. He then became an on-air contributor for CNN, but left the network amid allegations that he drugged a woman he’d slept with by slipping her an abortion pill without her knowledge. Miller vehemently denied the allegation and filed suit.

Delgado has also started a GoFundMe page to help fund her legal fees, claiming that Miller has subjected her to litigation abuse and refuses to pay child support.

“You may remember me from the Trump 2016 Campaign, wherein I was impregnated by Trump-aide Jason Miller, my supervisor (who, unbeknownst to me at the time, was still married with a pregnant wife hundreds of miles away. This was the second workplace affair on a campaign Miller had had that year with a subordinate),” Delgado wrote on her fundraising page. “A day after giving birth, while still in the hospital, Mr. Miller served me with lawsuit papers. To suffocate and overwhelm me into submission, and with zero regard for how this affects my son, Mr. Miller paid attorneys tens of thousands of dollars — per month. The litigation is now nearly 2.5 years old. Mr. Miller has never made a settlement offer, never agreed to amicably reach a resolution, and never given my son and me a moment’s peace since the day he was born.”