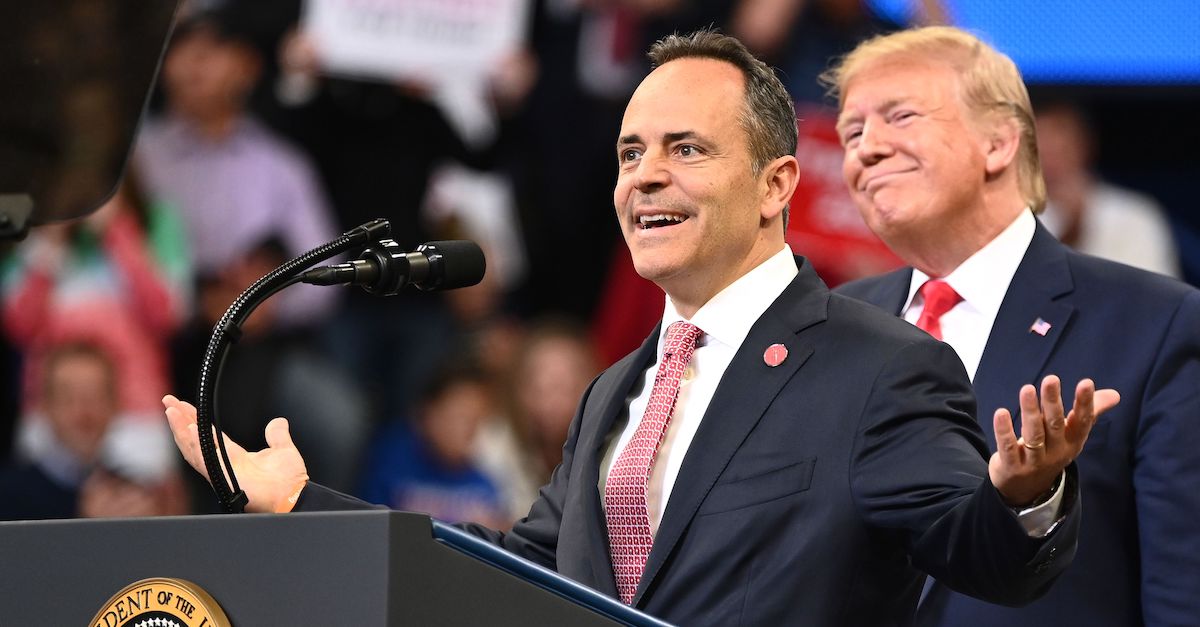 Republican Matt Bevin lost re-election to Democratic challenger Andy Beshear and in his last act as Kentucky governor pardoned or commuted hundreds of sentences. Several pardons, particularly those of convicted killers and a convicted child rapist, sparked widespread outrage. The FBI is reportedly asking questions about Bevin’s pardons, and at least one Kentucky lawmaker believes the investigation is “ramping up.”

Democratic State Rep. Chris Harris told The Louisville Courier Journal that he spoke with a criminal investigator by phone last week and was asked what — if anything — he knew about Bevin’s controversial pardons. Harris said, “The impression I got is that there was an investigation ramping up.”

The news outlet confirmed that Harris spoke with an FBI agent.

Harris said he does not know if this a formal or informal investigation, but that the bottom line is “there are questions being asked.”

Bevin, for his part, has welcomed a federal investigation, and even claimed it would end up being the case that his loudest critics will end up behind bars.

While Bevin said the decision-making process was informed by his Christian faith and “thorough,” he also defended the pardon of convicted child rapist Micah Schoettle because the victims’ “hymens were intact.” Dr. George Nichols, who was Kentucky’s chief medical examiner for 20 years, said this justification made clear that Bevin didn’t know the law, medicine, and anatomy.

Nichols went on to say he was fortunate for never having to report to “that asshole” (Bevin).

This was far from the only pardon that incited the ire of the public.

Delmar Partin, 63, was convicted in 1994 in the murder of Betty Carnes, a mother of three and Partin’s co-worker at the Tremco Plant in Barbourville, Kentucky.

According to the Lexington Herald Leader, the coroner was never able to determine if Carnes “was killed by asphyxiation or by the eight blows to her head” that were delivered with a metal pipe, “but it was very clear that her head was then chopped off and placed on her lap in a 55-gallon barrel that was destined for a toxic waste site.”

Bevin nonetheless pardoned and commuted Partin’s sentence due to the state’s failure to test DNA evidence.

“Whereas, I hereby commute the sentence of Delmar Partin from life to time served. Additionally, given the inability or unwillingness of the state to use existing DNA evidence to either affirm or disprove this conviction, I hereby pardon Mr. Partin for this crime and encourage the state to make every effort to bring final justice for the victim and her family,” Bevin wrote in the order.

The commonwealth attorney who prosecuted the case told the Herald Leader that Bevin’s decision was “mystifying” and arrogant.

“I think its arrogance of one who has a God-like image of himself,” Tom Handy said of Bevin. “And a lack of concern for anybody else.”

“He hated her so much and he wanted to punish her with her looking at him before he cut her head off,” Handy said. “The evil is unimaginable.”

Additionally, Handy said that the issue of DNA evidence had never been brought up by Partin’s own defense attorney, Bill Johnson, despite the case going all the way up to the state’s Supreme Court.

Bevin’s pardon of convicted killer Patrick Brian Baker sparked accusations that pardons were sold. Bevin said publicly that he believed the evidence against Baker in the 2014 death of Donald Mills was “sketchy at best.” Mills was shot and killed in front of his family, and Baker was convicted of impersonating a peace officer, tampering with evidence, reckless homicide, and robbery. It was immediately noticed that Baker’s family hosted a fundraiser for Bevin’s benefit and donated to his campaign:

As the Courier-Journal also reports, Baker’s family “raised $21,500 at a political fundraiser last year to retire debt from Bevin’s 2015 gubernatorial campaign.” Baker’s brother and sister-in-law also donated $4,000 to Bevin campaign, according to a state election finance database, the paper reports.

“Patrick Baker is a man who has made a series of unwise decisions in his adult life,” Bevin wrote in his pardon letter dated Dec. 6, adding that evidence in his conviction was “sketchy at best.” “I am not convinced that justice has been served in the death of Donald Mills, nor am I convinced that the evidence has proven the involvement of Patrick Baker as murderer,” Bevin wrote.

Baker said in a statement, “I did not kill Donald Mills and my family did not pay for my release.” He served two years of a 19-year sentence, and two others are still behind bars for the killing.