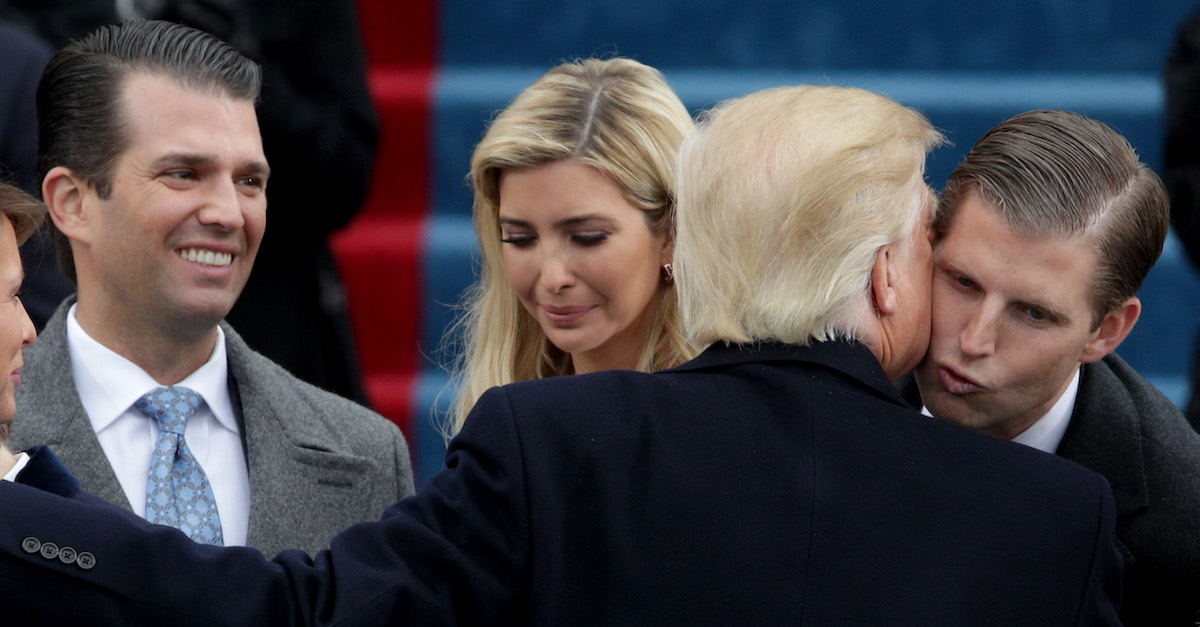 Attorneys for President Donald Trump and his children are being accused of “gamesmanship” by attorneys for several anonymous plaintiffs who allege the Trumps and the Trump Corporation promoted an illegal get-rich-quick pyramid scheme. The alleged “gamesmanship” — a word used by a plaintiff’s attorney in a Tuesday hearing before the Second Circuit Court of Appeals — is that the Trumps and the Trump Corporation are now seeking to push into arbitration a case which a judge refused to dismiss.

Attorneys for the Trumps and their affiliated company admitted in a letter to the court that they “intentionally” didn’t raise the possibility of arbitration sooner during the litigation because they hoped a judge would dismiss the case in regular court. By now seeking arbitration, the Trumps are hoping the dispute will be resolved privately, not in a public court of law.

The core lawsuit involves the multi-channel Trump promotion — including via the Celebrity Apprentice — of a company called ACN Opportunity, LLC. (ACN is is not currently a named defendant in the appellate matter but is rather involved as a “non-party appellant.”) Reduced to their simplest form, the plaintiffs’ claims are that ACN functioned as a multi-level marketing scheme which relied on Trump and his family to “con[] each of” the plaintiffs “into giving up hundreds or thousands of dollars” in violation of various state laws. According to the plaintiffs’ court papers, Trump et al. “promoted and endorsed ACN through videos, print and online media, at ACN events,” and on television. These endorsements were “crucial” to the plaintiffs’ decisions to become so-called “Independent Business Owners” through ACN and to invest money in doing so, the papers say. The plaintiffs claim ACN was secretly paying the Trumps for endorsing its business model when they believed the endorsement was being made in genuine faith.

The underlying legal issues involve an amalgamation of underlying state law claims including the “dissemination of untrue and misleading public statements” and “unfair competition” under California law and “unfair and deceptive trade practices” under both Maryland and Pennsylvania law, and common-law fraud and negligent misrepresentation.

Attorneys for the various plaintiffs, listed in the public court record under the pseudonyms Jane Doe, Luke Loe, Mary Moe and Richard Roe, say that while the plaintiffs’ agreement with ACN required arbitration, their claims against the Trumps and the Trump Corporation do not.

In a opening paragraph befitting of their client(s), attorneys for the Trumps shot back at the plaintiffs’ attempt to escape arbitration: “Plaintiffs’ opposition telegraphs weakness. Rather than address Appellants’ arguments, Plaintiffs run from them. They distort governing law, mischaracterize facts, and advance waived arguments—all to escape their own allegations, which doom them here.”

Here’s more on how the attorneys for the Trumps tried to pummel the plaintiffs into arbitration through their agreements with ACN:

Appellants [the Trumps] outlined how the [plaintiffs’] complaint mentions ACN over 700 times, references IBOs more than 100 times, describes Appellants as having a “longstanding commercial relationship with ACN” that included “close personal and financial ties to ACN’s founders and principals,” and spends countless paragraphs alleging that ACN and Appellants worked together to induce individuals to enter into IBO Agreements with ACN. To all of this, Plaintiffs offer nothing in response. Instead, they run from their own allegations, mentioning only a single paragraph in their 505-paragraph complaint when addressing “intertwinedness” or the “close relationship” between ACN and Appellants.

The plaintiffs put it this way:

Defendants [the Trumps and their company] carried out a fraudulent scheme that harmed Plaintiffs. While accepting huge, secret payments from a multi-level marketing company called ACN, Defendants publicly insisted that they were independent of the company—and used that carefully cultivated fictitious independence, along with their wealth and celebrity and a barrage of false statements, to induce Plaintiffs and many others to invest in ACN’s “business opportunity.” Although ACN benefitted too, Defendants instigated, constructed, and perpetrated the fraudulent scheme, drawing on a playbook that they also deployed elsewhere. Ultimately, it was Defendants’ scheme that persuaded Plaintiffs to invest and, as a result, Plaintiffs suffered significant losses as Defendants walked away with millions. Plaintiffs therefore filed this lawsuit to obtain redress from Defendants.

The plaintiffs during oral arguments sought to refocus the issue on their litigation versus Trump, et al., and away from ACN in their attempts to avoid private arbitration.

Read the recent court papers below: