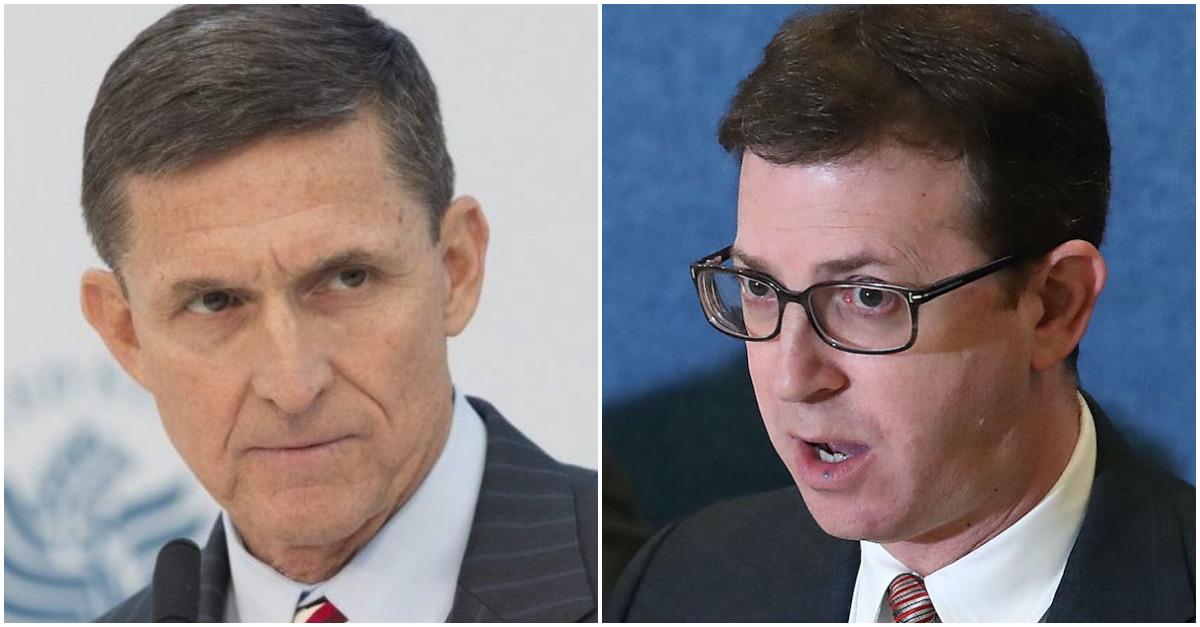 Zaid is a persistent and savvy critic of President Donald Trump and has had several high-profile run-ins with the White House throughout the span of the current administration.

Most notably, Zaid was part of the legal team representing the intelligence community whistleblower who filed a report on Trump’s own infamous phone call related to the unlawful cessation of military aid to the Ukraine–an event that directly led to the 45th president’s historic impeachment by the U.S. House of Representatives in 2019.

Zaid was also the public face for a teapot-tempest scandal over one of his tweets that sarcastically referenced a coup d’etat against the Trump administration. Fall-out from that scandal was severe and predictable but the imbroglio quickly sputtered out.

On Saturday, however, the well-known attorney put forth a legal perspective that likely aligns with the opinions of the Oval Office’s current inhabitant viz. Flynn’s unmasking and the subsequent leaking to the press after that unmasking occurred.

In a tweet, Zaid said he disagreed with Marc Thiessen‘s recent piece of Flynn apologia in the Washington Post which attempts to absolve the would-be Trumpworld martyr of all responsibility and because the column “conflates significance of unmasking requests.”

The Justice Department was correct to drop charges against Flynn for lying to the FBI about his communications with Kislyak. The case was reviewed by Jeff Jensen, the U.S. attorney for the Eastern District of Missouri with two decades of experience as a prosecutor and FBI special agent, and the resulting 108-page motion to dismiss is a searing indictment of FBI misconduct.

The department found that there was no legal justification for the FBI to question Flynn in the first place, because the interview was “untethered to, and unjustified by, the FBI’s counterintelligence investigation” of Flynn. The FBI had decided to close that inquiry because of an “absence of any derogatory information.” That meant Flynn pleaded guilty to making false statements that were not “material” to any investigation.

A separate and discrete issue stood out to Zaid about the underlying circumstances leading up to the Flynn contretemps.

“I fully agree that whoever illegally leaked classified details of #Kisylak call should be disciplined, lose their security clearance and/or be prosecuted,” he said via Twitter.

Law&Crime followed up with Zaid to elaborate on the legal issues surrounding the Flynn unmasking leak.

“The [National Security Agency] intelligence intercept is a classified document,” Zaid said in an email. “So, too, is information that is revealed due to unmasking. This information is maintained in classified systems and only those authorized with a need to know have access. To release that information to unauthorized third parties, particularly the media, is a felony.”

“Whoever leaked the information violated their secrecy, non-disclosure agreements and broke the law–unless they were authorized to do so, regarding which there’s no evidence to support that posture,” he added.

RELATED: These Are the Legal Issues Surrounding ‘Unmasking,’ and Here’s Who’s Doing It the Most

Zaid’s insistence that whoever leaked the details of the Kislyak-Flynn conversation should suffer consequences aligns with the years-old legal analysis of constitutional attorney and The Intercept editor Glenn Greenwald–if not the civil libertarian’s conclusion.

“In the spectrum of crimes involving the leaking of classified information, publicly revealing the contents of SIGINT — signals intelligence — is one of the most serious felonies,” Greenwald wrote less than a month after Washington Post journalist and Central Intelligence Agency conduit David Ignatius first reported on phone call in January 2017. “Journalists (and all other nongovernmental citizens) can be prosecuted under federal law for disclosing classified information only under the narrowest circumstances.”

Reflecting on the hypocrisy of partisan Democrats who routinely deplored and prosecuted leaks to the full extent of the law during the Obama administration while praising Trump era leaks as heroic, Greenwald maintained the Flynn leaker(s), like Edward Snowden and Chelsea Manning before them, had provided a public service.

“[V]ery few people are calling for a criminal investigation or the prosecution of [the Flynn] leakers, nor demanding the leakers step forward and ‘face the music’ — for very good reason: The officials leaking this information acted justifiably, despite the fact that they violated the law,” he argued. “That’s because the leaks revealed that a high government official, Gen. Flynn, blatantly lied to the public about a material matter — his conversations with Russian diplomats — and the public has the absolute right to know this.”

Zaid’s Saturday determination that the Flynn leaker(s) should be prosecuted stakes out a similar position, which is decidedly unfamiliar territory for most high-profile critics of the Trump administration.