‘This Guy Is a Piece of Work’: Democratic State Lawmaker Charged with Smuggling Handcuff Key into Jail After Third Bond Violation 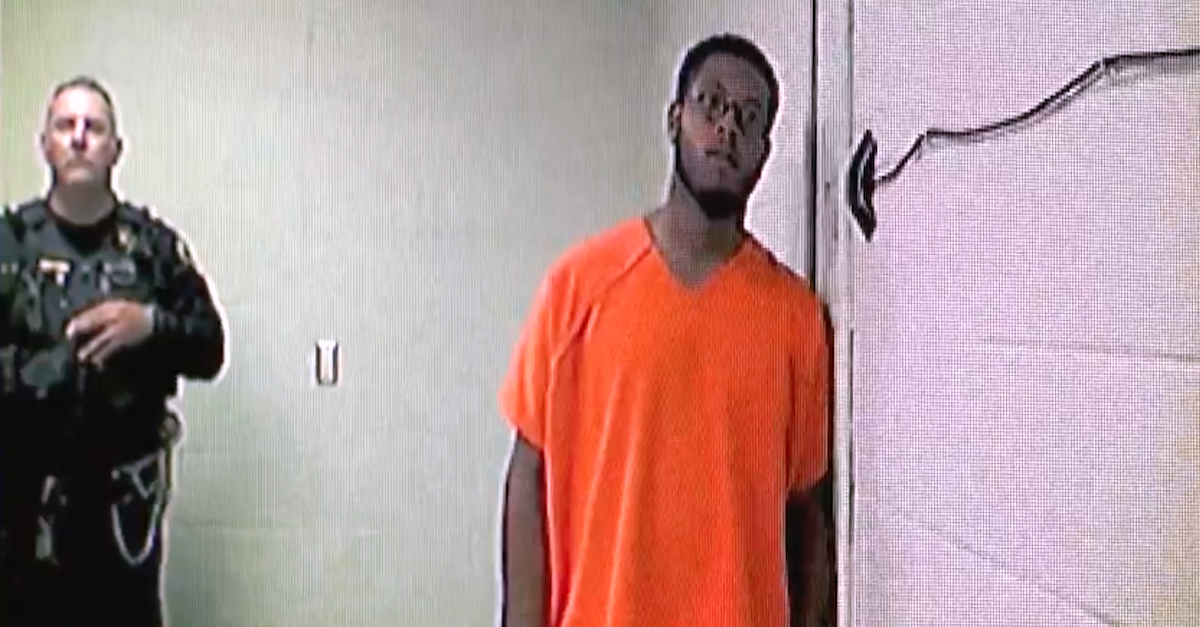 Jewell Jones (in orange) appears in a screengrab from a WJBK-TV video of a court appearance.

A Michigan state lawmaker who has faced months of legal woes is now facing two additional charges after authorities say he snuck a handcuff key into a county jail.

Rep. Jewell Jones, 26, a Democrat from Inkster, was caught literally with his pants down during an alleged drunk driving spree on April 6th. That fiasco was said by authorities to have involved an unknown woman and a vehicle which ended up off the road. During that incident, a belligerent Jones was caught on video arguing with state troopers and at times hurling racial slurs toward them when the authorities showed up to deal with the situation. The state police used a taser and pepper spray to bring Jones under control; Jones is alleged to have threatened to call Gov. Gretchen Whitmer (D) and other high-profile state officials to force the state police to stand down or otherwise cut him a break.  Jones eventually accused law enforcement of using excessive force because he is Black.

According to the Howell, Mich. Livingston County Daily Press & Argus, Jones subsequently posted bond but reportedly did not stay out of trouble for very long. Jones pleaded guilty to a bond violation in June, the newspaper reported, after he departed for military training without telling the court or his attorney.

After that slip-up, Livingston County District Court Judge Daniel Bain reportedly forced Jones to wear an ankle monitor to measure whether he was consuming alcohol. But Jones failed to pay for the device and was subsequently ordered to pay a $1,000 fine, the newspaper said. On Sept. 3rd, Jones’ “alcohol tether indicated a transdermal alcohol concentration level of 0.023 at 12:59 p.m., 0.023 at 4:37 p.m. and 0.022 at 7:09 p.m.,” the newspaper later reported, citing court records. And then, on Sept. 6th, Jones allegedly tampered with the device by placing a sock underneath it so that could not accurately produce readings, prosecutors reportedly said.

New: Screenshot of video Rep. Jewell Jones sent to show he didn’t drink alcohol or tamper w/tether shows a sock around the tether … he admitted to the allegations Tuesday and bond was revoked .. his now deleted Fri Instagram post denying he drank alcohol pic.twitter.com/y4DYwOx9Cf

The alleged sock incident resulted in yet another round of court proceedings on Tuesday. During those proceedings, Jones reportedly admitted to a third bond violation, and Judge Michael Hatty ordered Jones into custody. It was after Tuesday’s court appearance that authorities said Jones had managed to smuggle a handcuff key into the Livingston County Jail.

“Allegations in this matter allege the Defendant taping a handcuff key to the bottom of his foot with clear tape and was found by Livingston County Corrections Officers upon his incarceration,” Livingston County Chief Assistant Prosecuting Attorney Carolyn Henry wrote in court documents obtained by the local paper.

Jones was therefore charged with “one count each of bringing a weapon into a jail and escape waiting a felony trial,” the paper said. That’s on top of the other accusations he faces in connection with other incidents — one of which reportedly involves weapons.

“He has shown this court that he is not going to follow terms of bond set by this court,” Henry said, again according to the Livingston County Daily Press & Argus. “He has shown to the court, through his actions, that he will lie to the court and he will continue to do whatever he wants.”

“At the end of the day, folks are handcuffed to and from a facility,” the sheriff added. “If someone has a handcuff key, that’s a bad day for us.”

“This guy is a real piece of work, and an embarrassment to all elected officials, and I believe he thinks somehow the laws do not apply to him,” Murphy said according to the television station. “More than that, I am mad. Had the handcuff key ended in an injury to my staff or another inmate I am not sure what I would have done; as my primary responsibility is the safety and security of my staff and inmates.”

A magistrate judge jacked Jones’ bond up to $100k and set another court date for Sept. 28th.

Jones pleaded not guilty during Wednesday’s hearing in connection with the key smuggling counts.