‘I’m a State Rep!’: Democratic Lawmaker Charged with Drunk Driving, Resisting Arrest After Authorities Catch Him with His Pants Down (VIDEO)

A Michigan state lawmaker was reportedly caught with his pants literally down in an alleged drunken driving spree which culminated with a car landing in a ditch, injuries to unknown female passenger, accusations of disparate racial treatment, charges of resisting arrest, threats to call the governor and other officials for support, and requests for special treatment.

Rep. Jewell Jones is a now-26-year-old Democrat from Inkster, Mich., a suburb in Wayne County southwest of Detroit. He faces a litany of charges surrounding an April 6, 2021 incident in another county midway between Detroit and the state capitol of Lansing. Police records say he was tased, pepper sprayed, and arrested after he became confrontational with the police.

The arrested stemmed from driving between Southfield and Fowlerville that was so shocking that “numerous other motorists called 911,” the Detroit Free Press said in a recap. Detroit FOX affiliate WJBK-TV obtained video taken by a motorist who said he observed Jones driving erratically.

Jones came to rest in a ditch in an SUV bearing the vanity license plate “ELECTED.” Some reports say the first responding paramedics found Jones and his companion with their pants down. From a WJBK report (which cites a separate report by the Michigan Information & Research Service, which requires a subscription):

A paramedic on scene had observed the woman’s pants were down and Jones’ pants were partially down, according to the report.

The woman was eventually placed in an ambulance after it was determined she was unable to stand on her own, had vomited, and was essentially unresponsive.

According to police records reviewed by Law&Crime, the lawmaker was so confrontational that medics requested a “priority one” law enforcement response. From a state police report:

I arrived on scene and observed a male subject close to an EMS worker and the worker attempting to push him back. I contacted the male as the EMS worker was advising him, he was not allowed to go in the ambulance. I asked the male subject to step back by my patrol car. The male subject appeared to be highly intoxicated. There was a strong odor of intoxicants coming from him and his speech was slurred as he spoke. His eyes were red bloodshot and glassy and his fine motor skills were poor.

The “male subject” (Jones) flashed a badge, but state troopers didn’t get a good look at it. Again, from the state police report:

He stated he was an off-duty officer. I asked to see his ID and his driver’ licenses. I requested the ID and driver’s license several times and he refused to comply. He then stepped back and shock out him arms and clinched his rights fist with a set of keys in it, he then squared up his posture as if he were about to do something. He was asked one last time for his ID and driver’s license, he then responded, “I can’t do that.” I reached out for the man’s right wrist so we could detain the subject and he immediately started to pull away and resist.

What follows in the report is a play-by-play description of everything the state police did to attempt to arrest Jones and everything Jones allegedly did to resist. The affair involved “loud verbal commands,” two jolts from a Taser, a warning about being pepper sprayed, and one shot of pepper spray to the eyes.

Troopers said they found a “loaded handgun sitting in the cup holder in the center console” of Jones’s vehicle.

A female passenger was hurt. She later confirmed Jones was driving the vehicle. Her name is redacted in police reports.

Jones refused medical treatment and was taken to jail. Pursuant to a warrant, Jones’s blood was drawn for a blood alcohol test which registered a 0.191. That’s more than twice the legal limit of .08. (Prosecutors later said the number was “at least 0.17,” the Free Press reported.) The blood drawn occurred at 9:16 p.m., other records show; troopers were dispatched to the scene a few minutes after 6:00 p.m. 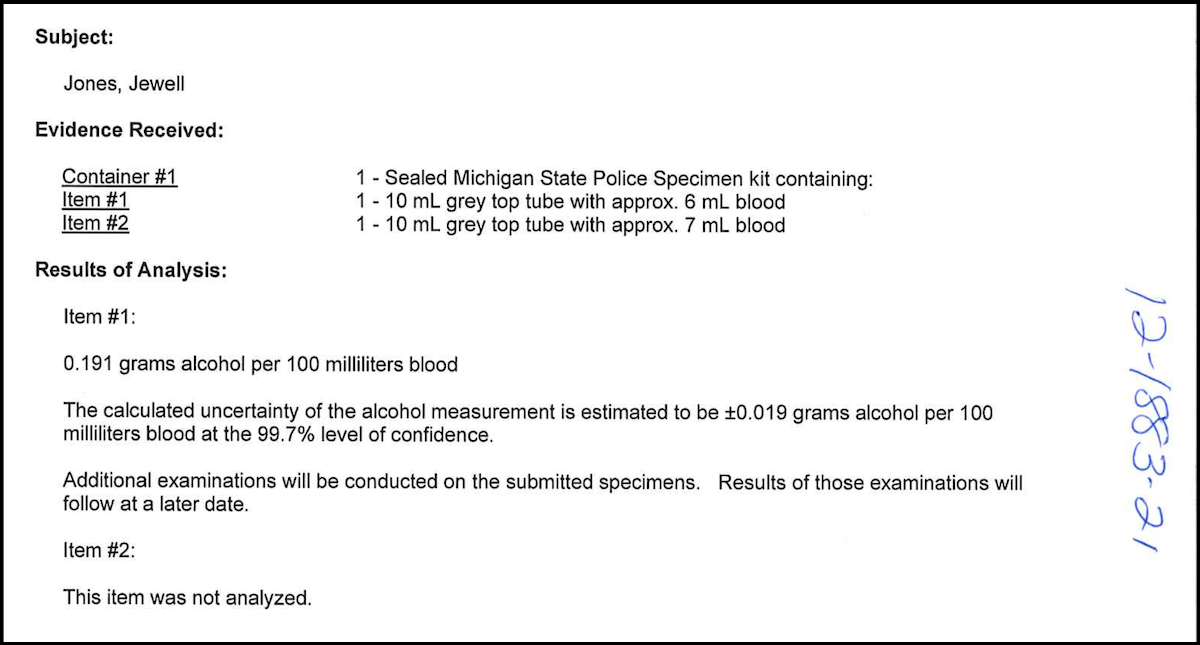 Supplemental police reports contained some of the dialogue between Jones and the assembled officers. What follows is a mix of what is contained in those reports based on officers’ memories and what is discernible in the choppy dash cam video and audio recordings. It is not a complete transcript.

The video shows a state trooper pulling up behind a stopped ambulance on the right-hand shoulder of a highway. A trooper exits and approaches Jones, who was engaged in conversation with a team of three assembled paramedics.  Jones said he wanted to ride in the ambulance — apparently with his female companion. The paramedics and the trooper told him he could not.

“If they say no, you’re not going,” the trooper told Jones.

“Relax; hold on,” the trooper said several times as he blocked Jones from moving.

“I’m not gonna do nothing crazy, bro,” Jones said.

“Don’t do something stupid,” the trooper said.

The trooper cut him off.

“I’m going to figure out what’s going on.” the trooper said. “Relax, alright? Let’s see your ID and your driver’s license.”

“I won’t give them to you, brother,” Jones said.

Jones walked to the right; the trooper followed him. 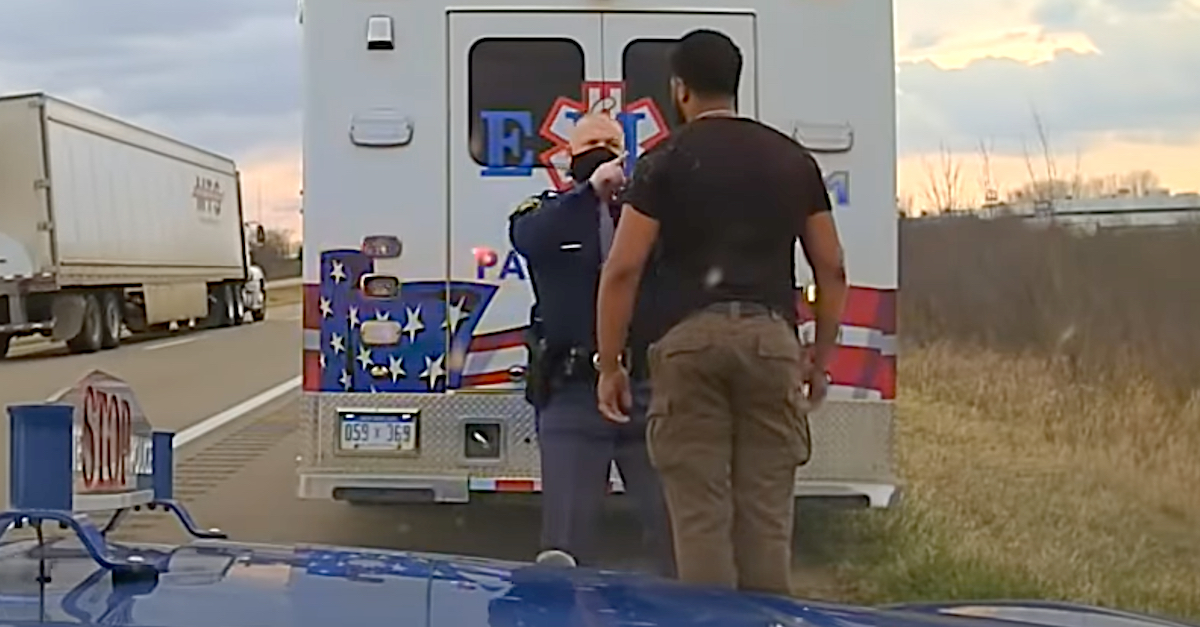 “Relax. Don’t do something stupid that you’re going to regret,” said the trooper.

Jones repeatedly refused to hand over his license. He appeared to say he would be walking over to his vehicle and “sitting down.”

“No,” the trooper said. “I’m asking for your ID one more time and your driver’s license. Do you understand me?”

The trooper then identified himself as Trooper Gilmer.

“Don’t be dumb. That would be a big mistake for you right now,” Gilmer said.

“I want your ID and your driver’s license,” Gilmer asked yet again.

Another trooper walked up behind Jones. Jones asked who it was. 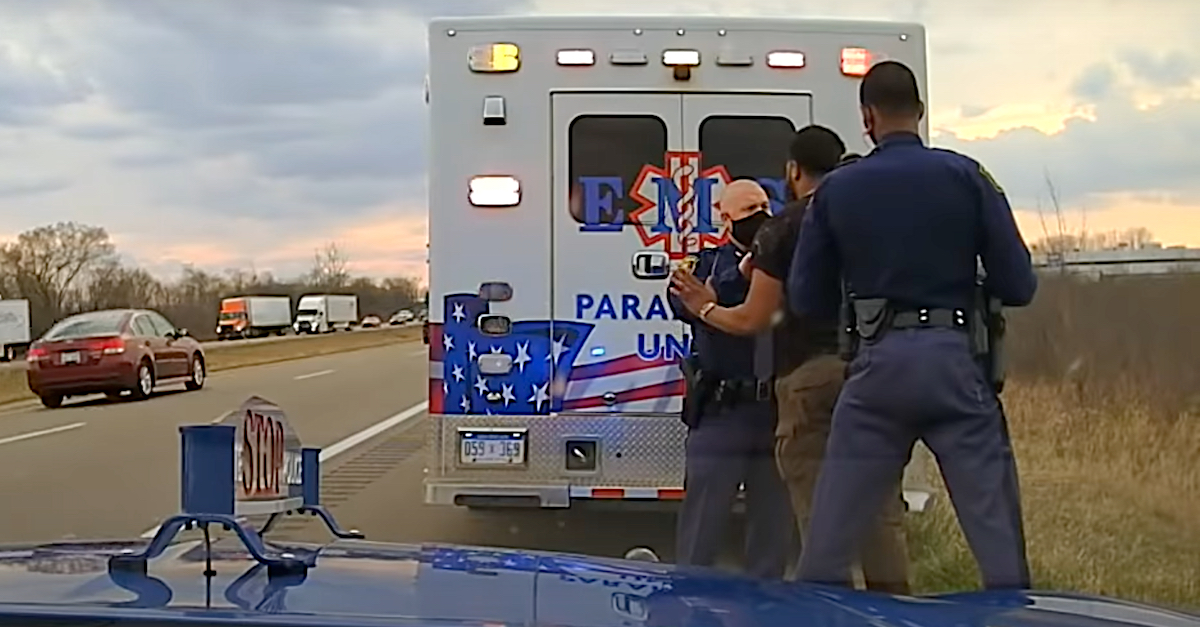 A second trooper approached Jones and Gilmer approximately one minute into the encounter. Image via dash cam video.

“I got something to say to you, bro,” Jones said. (The police report calls that statement an example of “inactive resistance.”)

“Can I talk to you in your ear?” Jones also asked Gilmer several times.

“You’re not doing what you’re supposed to be doing right now, and that’s the problem,” Gilmer said with reference to Jones’s failure to turn over his ID.

Jones complaint that Gilmer touched him. Gilmer said he was keeping him away.

“We’re going to do this one step at a time,” Gilmer said.

Jones asked if he could get his phone first. Gilmer told him “no.”

“Right now, I want your ID and your driver’s license, okay?” Gilmer asked.

Jones said he “can’t do that.”

Officers then moved to place Jones into custody.

The video then cuts to show the view from a different squad car’s dash cam.

The resulting scuffle ended with two officers holding Jones down on the ground several feet off the side of the highway.

While asking Jones a seemingly uncountable number of times to allow himself to be handcuffed, Jones repeatedly said he would get his ID. By then, it was too late.

That exchange ended at about five minutes and five seconds into the recording. 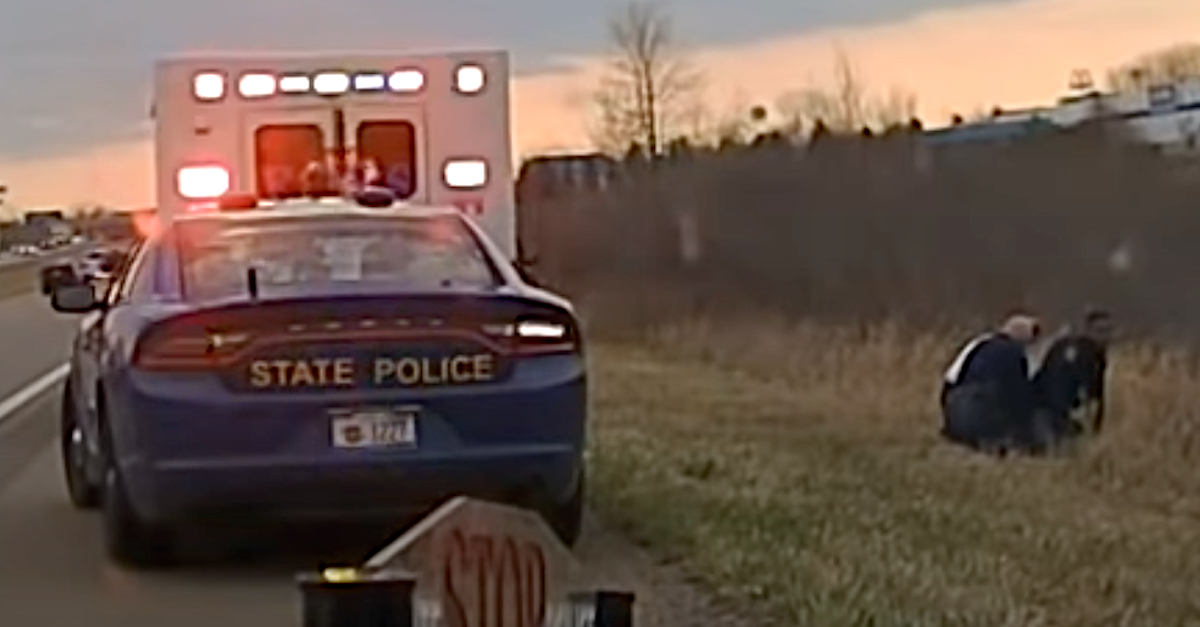 “Give us your left arm! Stop resisting!” the officers commanded at 5:16.

“You’re not sitting up! Give me your left arm!” the officers exclaimed.

“I’m not giving you my arm unless you shoot me,” Jones said at one point. “You shoot me, I’ll get up.”

“What!” a shocked officer replied. 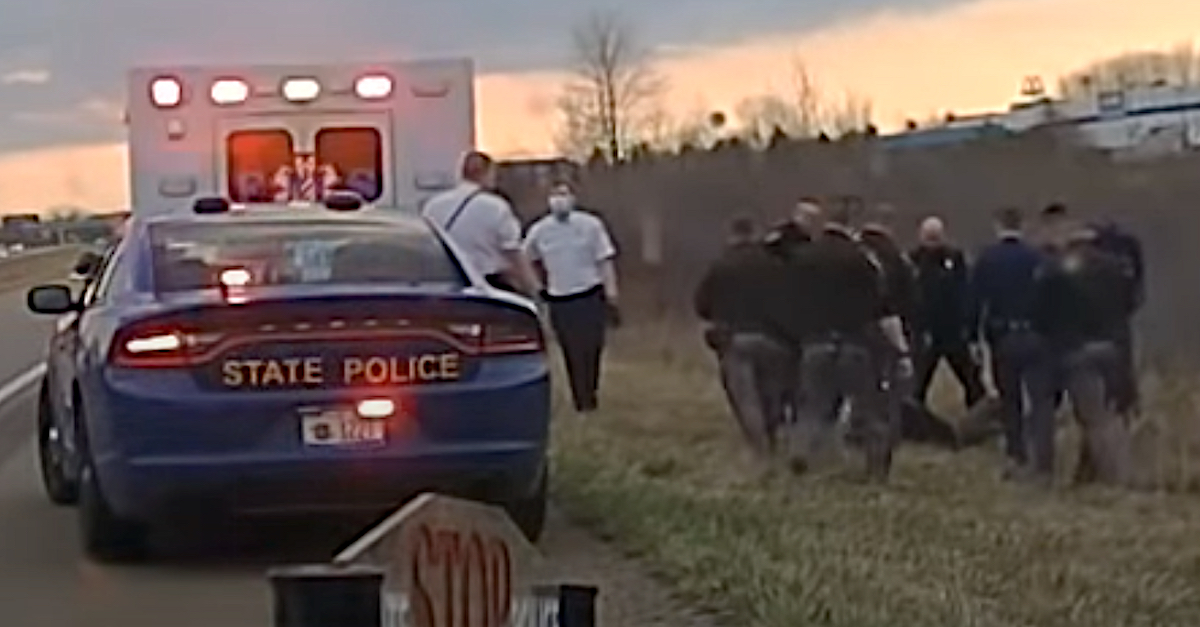 “You’re not stronger than me, I’ll tell you that much,” Jones said. “I don’t give a fuck, bro; when I call Gretchen I’ll need y’all ID’s badge numbers — everything.”

He then said he would give the troopers he would “sit here and give y’all my shit.”

“Bro, I’ve been abused by the police so much,” Jones said after he noting that he “worked with the police.”

“Cooperate with us!” a trooper told him. “Give us your left arm!”

Jones suggested again he needed to call “Gretchen” (Gov. Whitmer) to help him out.

Troopers told Jones he was “under arrest” about eight minutes into the recording. 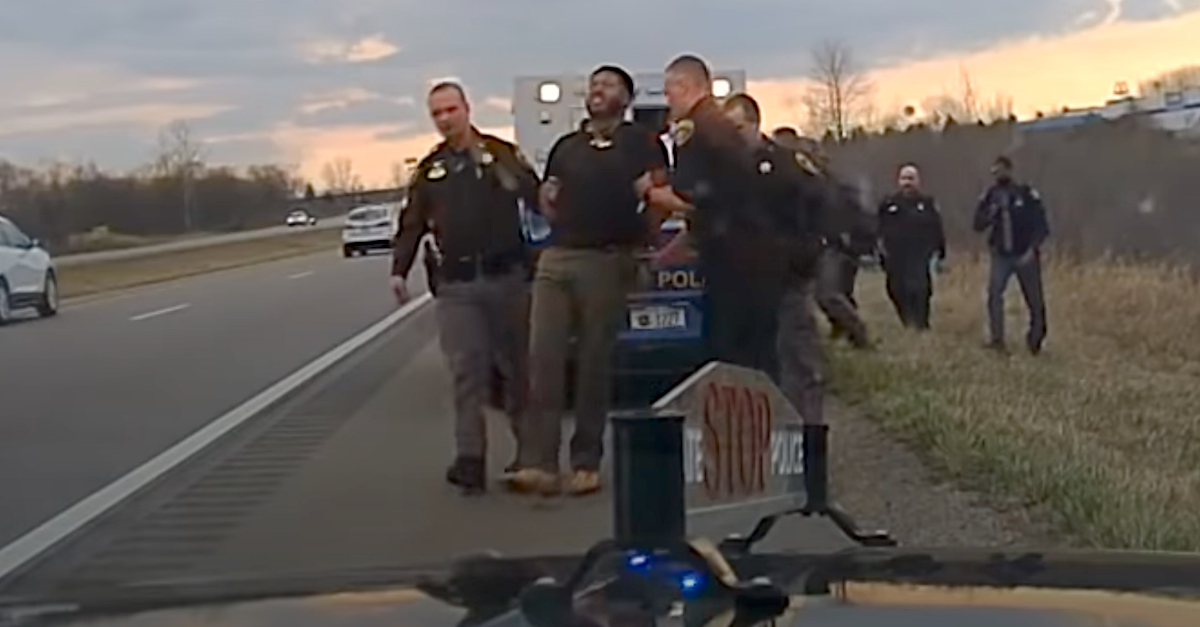 Jewell Jones was hauled to a squad car about ten minutes after the encounter started.  Image via dash cam video.

According to police reports, Jones also told troopers “its not going to be good for you” and “I run y’all budget, bro.”

“Tell Joe who you got. You’re gonna call fucking Joe . . . I’m not sure he’s (inaudible). If he’s not up, wake him up. Tell Joe who you have. Tell Joe who you have — handcuffed, okay?” Jones said in a slow, slurred monologue from the back of a squad car starting at about 19:05 into the video. “And then, let him know you have me handcuffed, and let him know I would like to go home. After that, let me go fucking home. But talk to him first. Wake his ass up. You want me to call him? You’s all put like like ten fucking troopers are on me. Give me my phone; I’ll call him myself. I’ll call him and tell him I’d like to go home. That’s the only place I’m going after this.”

At about 20:20 into the recording, Jones complained that “young troopers” put him in custody in a “fucking traumatic” fashion while he was “already fucking Black.” 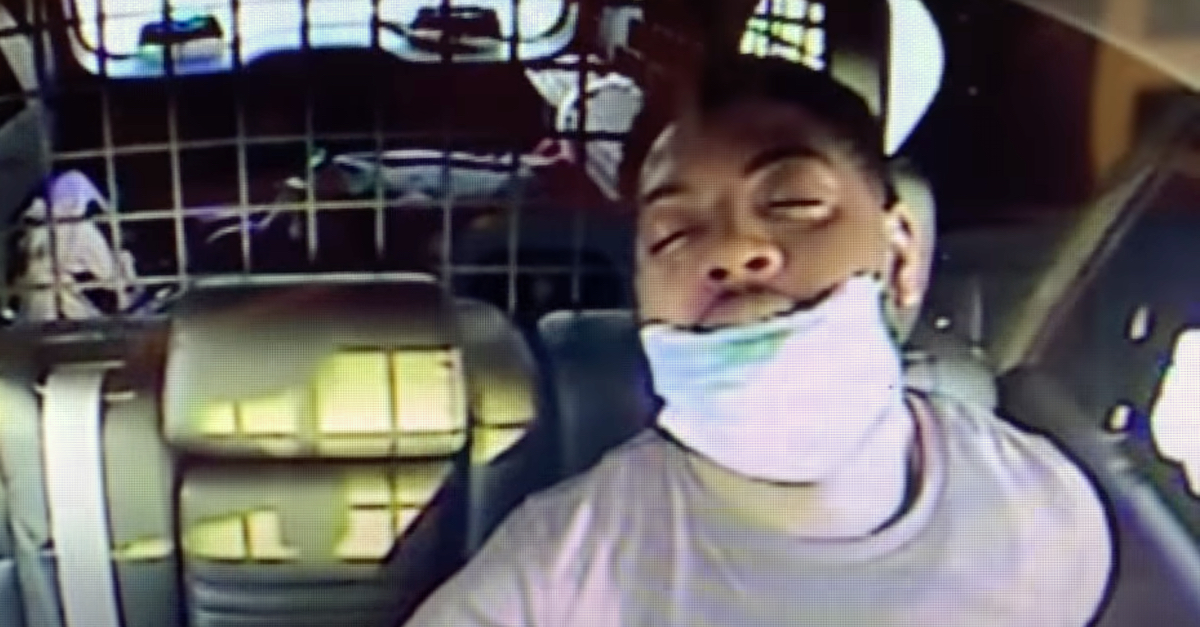 Jewell Jones in seen in the back of a police squad car.  Image via police video.

According to a press release by the Livingston County Prosecutor’s Office, the charges Jones faces are four counts of resisting and obstructing a police officer (which carries a possible two-year sentence), operating a motor vehicle with a high blood alcohol content (which carries a possible 180-day jail term), operating a motor vehicle while intoxicated (93 days), possession of a weapon under the influence of alcohol (93 days), and reckless driving (93 days). 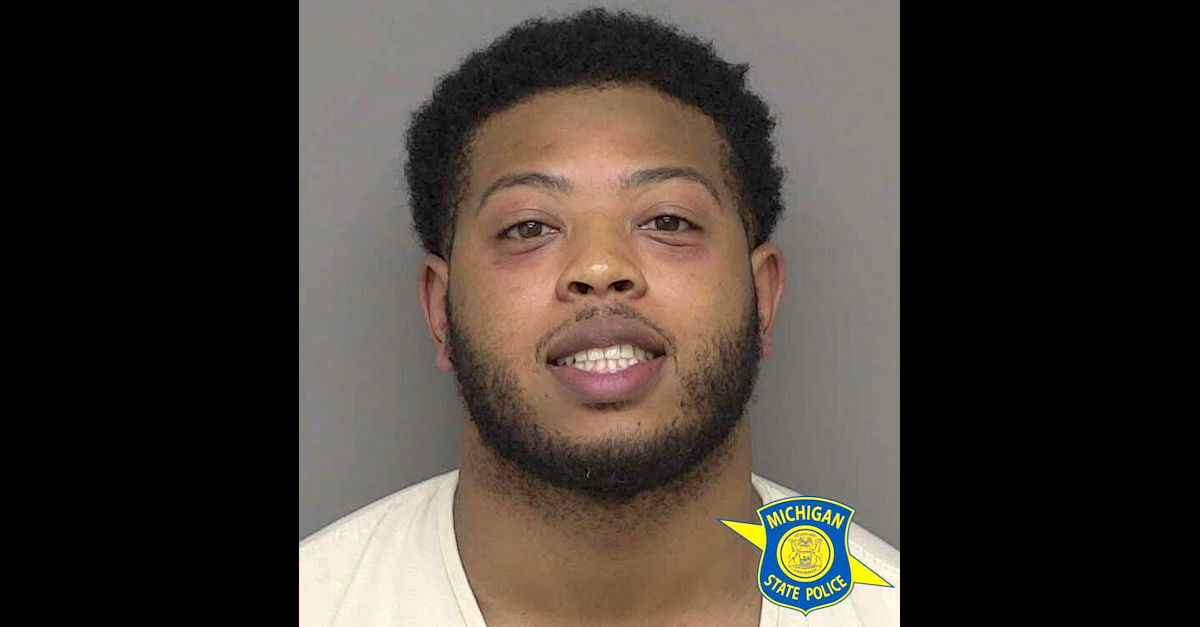 Ali Hammoud, Jones’s attorney, said Jones is an “auxiliary police officer . . . and a deacon in his church,” the Free Press reported. Hammoud said “Jones will continue to faithfully serve” his constituents when speaking with local reporters after a court hearing.

Hammoud also told the newspaper police used “excessive force” during the arrest and had no right to request Jones’s ID in the first place because no crime had been committed.

“There was no indication of alcohol,” Hammoud claimed.

The defense lawyer further disputed the police assertion that Jones’s car had rolled into the ditch.

A judge allowed Jones to keep any weapons he needed for National Guard duty. Jones’s legislative biography says he is a member of the Michigan National Guard.

The legislature is determining whether to discipline Jones.

Read the state police documents below:

Read the prosecutor’s press release below:

[Editor’s note: some quotes herein are slightly different than they appear in state police documents.  They been cleaned up to correct spelling and punctuation errors to make them easier to read.]