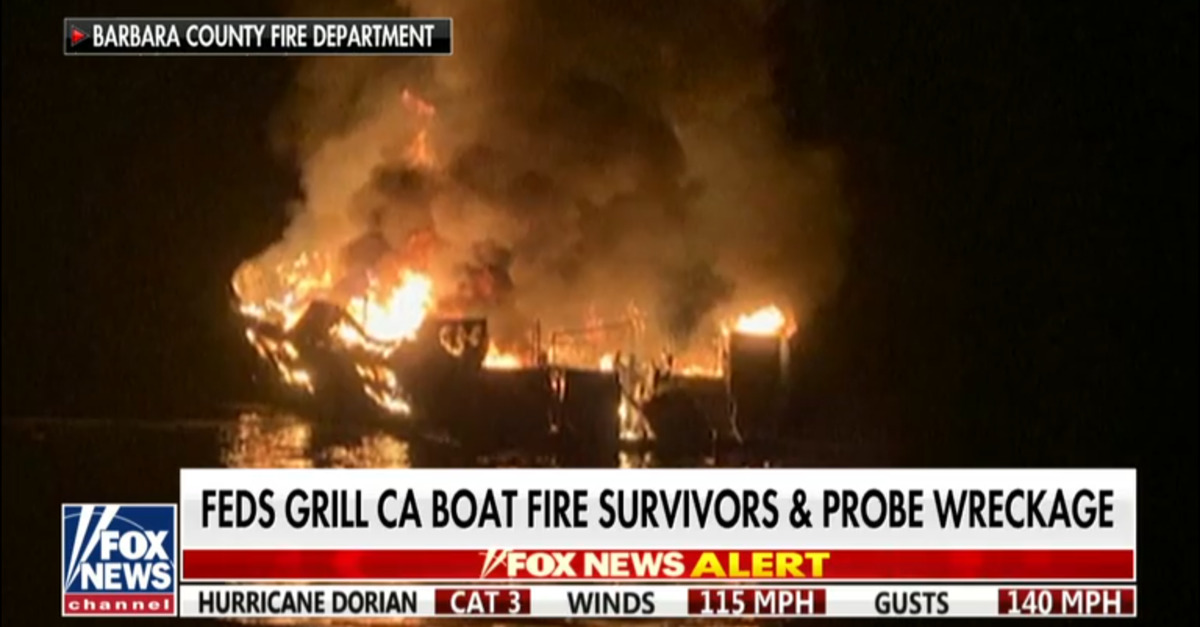 Thirty-four people died after a dive boat caught fire off the California shore. And the owners of that boat have filed a petition claiming they shouldn’t have to pay a cent. It may sound ridiculous, but because of the law on the books, the move just might work.

Glen and Dana Fritzler are the owners of the 75-foot Conception, a dive vessel which was scrapped after the hours-long burning incident which occurred over the Labor Day weekend near the Channel Islands National Park. Thirty-three passengers burned or drowned to death as well as one crew member–and the final body has yet to be found.

That ongoing search for the missing corpse didn’t stop the Fritzlers or their legal team from filing a petition based on the Limitation of Liability Act of 1851.

The “obscure” law on point here is codified at 46 U.S.C. §§ 30501-30512 and several distinct sections of the antebellum federal statute are believed to augur quite well for the Fritzlers’bottom line.

First, there’s the general limit on liability contained at § 30505. This section reads, in full:

(b) Claims Subject to Limitation.—
Unless otherwise excluded by law, claims, debts, and liabilities subject to limitation under subsection (a) are those arising from any embezzlement, loss, or destruction of any property, goods, or merchandise shipped or put on board the vessel, any loss, damage, or injury by collision, or any act, matter, or thing, loss, damage, or forfeiture, done, occasioned, or incurred, without the privity or knowledge of the owner.

(c)Wages.—
Subsection (a) does not apply to a claim for wages.

That’s quite a bit of back-and-forth legalese. The most relevant reading of the above section, however, could be singled out and summarized as: “[T]he liability of the owner of a vessel for any claim, debt, or liability…shall not exceed the value of the vessel.”

The Fritzlers’ petition filed Thursday with the U.S. District Court for the Central District of California claims the value of the vessel is, after the fire, exactly zero dollars.

It’s also useful to note the language of the above-quoted statutory section dealing with “the privity or knowledge of the owner.” This language is essentially mirrored in the broader statute’s specific section limiting “liability for personal injury or death” and which is contained at § 30506(e):

In a claim for personal injury or death, the privity or knowledge of the master or the owner’s superintendent or managing agent, at or before the beginning of each voyage, is imputed to the owner.

Most of the recent legal battles over the 1851 Limitation Act deal with whether or not the owner(s) of the doomed vessel had any privity or knowledge that the boat was being operated with negligence or was not seaworthy.

Again, the Fritzler petition makes a direct bid to forestall and preempt any such claims.

“At all relevant times, Plaintiffs used reasonable care to make the Conception seaworthy,” the petition claimed, “and she was, at all relevant times, tight, staunch, and strong, fully and properly manned, equipped and supplied and in all respects seaworthy and fit for the service in which she was engaged.”

The petition also reiterated this argument to expressly invoke the 1851 Limitation Act’s protections:

The Fire and all consequential alleged injuries, damages and deaths occurred without the privity or knowledge on the part of Plaintiffs, and was not caused or contributed to by any negligence, fault or knowledge on the part of Plaintiffs, or anyone for whom Plaintiffs may be responsible, at or prior to the commencement of the above-described voyage. Plaintiffs desire to invoke the benefits of exoneration from or limitation of liability as provided by 46 U.S.C. § 30501 et seq., and in the same proceeding Plaintiffs desire to contest their liability and the liability of the Conception for any alleged loss or damages arising out of the aforesaid Fire.

What all of the above means is that after any claims are made, there will be a non-jury trial presided over by a judge where the Fritzlers will be given an opportunity to show that they were not at fault for the fire. And, if successful, any eventual claimants would only be entitled to the value of the ship’s remains: nothing at all.

And, though the facts regarding the cause of the catastrophic fire are obviously unknown at present, legal experts believe the Fritzlers and their corporation, Truth Aquatics, Inc., are on firm legal footing.

“The law is so antiquated and so skewed in favor of the ship owners that damages for wrongful death type cases is very limited unless one can prove exceptions,” attorney A. Barry Cappello, who represents victims in such maritime incidents, told the Atlanta Journal-Constitution. Cappello may end up working on behalf of the Conception victims, however, and added that there was a “strong” case for negligence here.

Professor Martin J. Davies, the maritime law director at Tulane University, also told the AJC that the law favors owners here–especially if they can show that the Conception was properly equipped and the cause of the fire remains unknown.

“[T]he fight is always about limitation because if you’ve got unlimited liability, well, … 30 dead people is a whole lot of money,” Davies said.