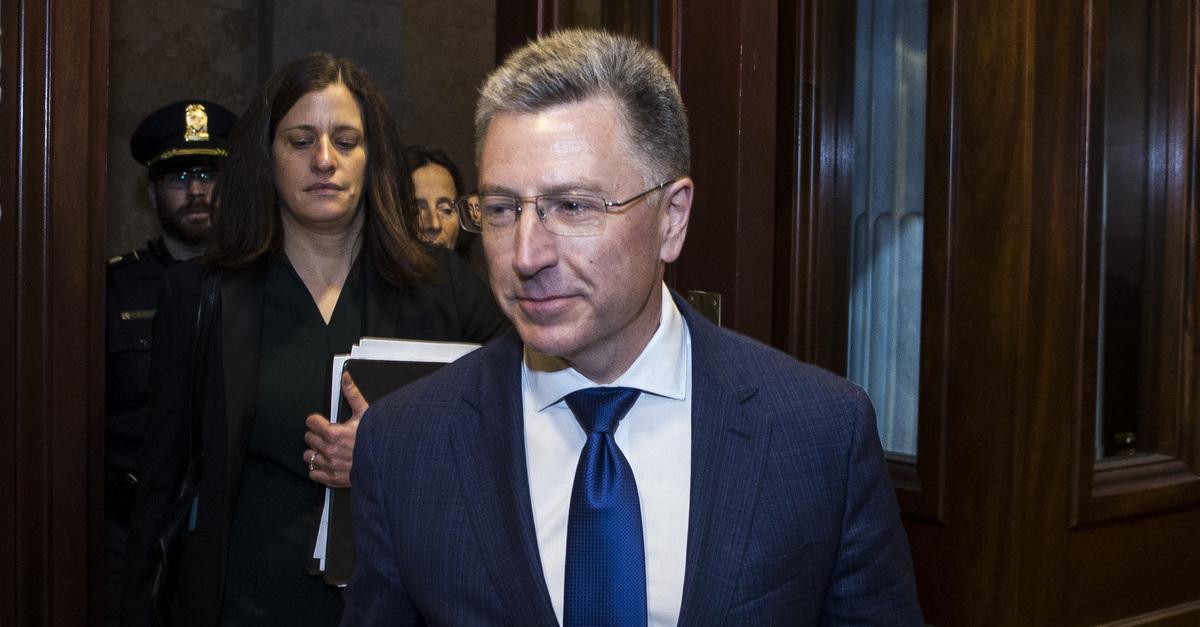 Kurt Volker was the first person in the Trump administration to fall on his sword over the Ukraine scandal that has engulfed the White House since early September.

Volker’s relatively speedy exit from the careening Ukraine scandal—and the Trump administration itself—has presaged terabytes worth of internal White House chaos, public and private backtracking, telegraphed doublespeak and recriminations leveled against perceived enemies in the wake of the House impeachment inquiry focused on whether President Donald Trump sought a quid pro quo in exchange for continued U.S. assistance to the Ukraine.

Newly public documents suggest that damage control has long been on the administration’s collective mind.

A cache of text messages released Tuesday afternoon by the House Intelligence Committee show the incredible pressure being brought to bear on the onetime U.S. Special Representative for the Ukraine.

“Kurt, Thanks for the support,” Trump’s personal attorney Rudy Giuliani wrote in a message dated Sept. 22. “All I need is for you to tell the truth.”

“The conversation I had was largely congratulatory, was largely corruption, all of the corruption taking place,” Trump said, according to a New York Times report from Sept. 22. “Was largely the fact that we don’t want our people, like Vice-President Biden and his son, [contributing] to the corruption already in the Ukraine.”

All the while, Giuliani was busy imploring Volker to issue a public statement in line with administration talking points.

“You called me about [Zelensky aide Andriy] Yermak and I reported back you and [Gordon] Sondland, eg. [sic], a conference call on Aug 11. Three others before. Really this is not hard just fair to affirm truth. Rudy,” Giuliani said.

“Also Secretary seems not to know you put us together,” Giuliani added. “Straighten him out.”

The Sept. 22 messages came two days before Speaker of the House Nancy Pelosi (D-Calif.) announced the impeachment inquiry, three days before the White House released a memo of the July 25 Trump-Zelensky call, and four days before the whistleblower complaint went public. Volker abruptly resigned his post the day after the complaint was released; sources close to the career diplomat said he felt it was no longer possible for him to do his job. Volker was mentioned by name in the complaint.

This is Rudy giving Volker a script. pic.twitter.com/M0FJVmQmWW

Speaking of a script, the voluminous SMS messages released on Tuesday show that Volker provided Zelensky’s aide with the contours of the statement requested by the White House viz. Hunter Biden and the Ukrainian Prosecutor General Office’s long-shuttered investigation into the natural gas company Burisma Holdings.

“Hi Andrey,” Volker wrote on August 13, “good talking–following is text with insert at the end for the 2 key items. We will work on official request.”

Special attention should be paid to the problem of interference in the political processes of the United States, especially with the alleged involvement of some Ukrainian politicians. I want to declare that this is unacceptable. We intend to initiate and complete a transparent and unbiased investigation of all available facts and episodes, including those involving Burisma and the 2016 U.S. elections, which in turn will prevent the recurrence of this problem in the future.

During an August exchange, Volker and U.S. Chargé d’Affaires for Ukraine Bill Taylor discuss the deepening morass surrounding the Trump administration’s efforts to secure a statement that Ukrainian authorities were investigating the younger Biden’s former business.

“The person who asked for an official request was Yermak?” Taylor inquired.

“I won’t,” Taylor replied. “You are right–this is not good. We need to stay clear.”