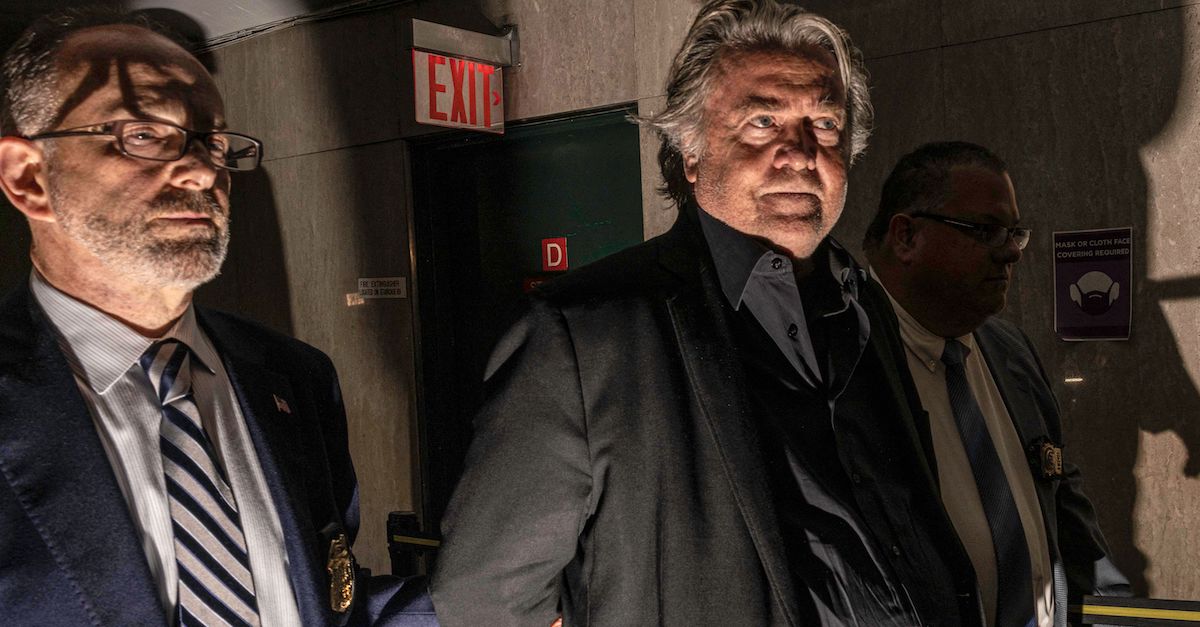 Donald Trump’s former advisor Steve Bannon (C) is led away from a New York court in handcuffs on September 8, 2022.

Ushered into a Manhattan criminal courtroom in handcuffs, a smirking Steve Bannon pleaded not guilty to six criminal charges related to a scheme to defraud donors of We Build the Wall. The indictment broadly mirrors the federal allegations pardoned by former President Donald Trump.

Officers removed Bannon’s handcuffs before the proceedings began, and from there, the ex-Trump strategist did not speak during the arraignment, pleading through his lawyer. We Build the Wall, whose corporate entity is also charged in the indictment, also denied the allegations through its attorney.

The Manhattan District Attorney’s office asked the judge to order Bannon to surrender all of his passports and not apply for any new passports during the pendency of the case.

Hours after unsealing a six-count indictment against Bannon, Manhattan District Attorney Alvin Bragg (D) held a press conference, where he told reporters that Bannon must be held “accountable” for trying to “profit off the backs of donors.” He emphasized his charity’s promise that its executives would not take a penny of donations for their salaries.

“We Build the Wall’s fundraisers used that phrase time and again — ‘not a penny’,” Bragg said. “But instead of pennies, the president have received more than $250,000 in a salary funded by donations, at least $140,000, we allege was funneled by Steve Bannon.”

In August 2020, the Department of Justice accused Bannon of pocketing $1 million, through a separate and unnamed non-profit entity, of the $25 million raised by We Build the Wall. That allegation does not appear in the state indictment, a disconnect that Bragg attributed to varying jurisdiction. The state claims also estimate the scale of the alleged fraud at $15 million.

“We then began investigating and determined that Mr. Bannon must be held accountable in this jurisdiction — the jurisdiction for his conduct, as the architect of this scheme, which impacted hundreds of Manhattan residents,” Bragg said. “Because the simple truth is that it is a crime to profit off the backs of donors, by making false pretenses.”

Bragg declined to comment about whether he ever considered charging Bannon with grand larceny, limiting his answers to the four corners of the indictment. The top count of that indictment, the district attorney said, carries a maximum sentence of 5 to 15 year imprisonment.

That indictment is silent on how much money went to Bannon, though it states that money went to a separate non-profit entity that he controlled.

As with the investigation of the Trump Organization’s chief financial officer Allen Weisselberg, New York Attorney General Letitia James (D) assisted in the probe and delivered remarks at its unsealing.

“Simply put, Steve Bannon lied to ordinary citizens about this project,” James said. “He diverted their hard-earned money. He preyed upon the emotions of New Yorkers and Americans. And then when Mr. Bannon was held accountable for his criminal actions, the former president pardoned him.”

“Given this reality, it is understandable how hard-working, honest, ordinary citizens are cynical about the two systems of justice in our country,” she added.

After the proceedings ended, Bannon — released on his own recognizance — walked out of the courtroom unconstrained, save for his pledge to turn over his passports. Those travel papers are currently in the custody of the Department of Justice, given his recent conviction for contempt of Congress. Bannon continued to attack his prosecution as political to reporters outside the courthouse, referring to its timing close to the midterm elections.

The Justice Department issued its indictment when it was under the control of Attorney General Bill Barr, a Trump appointee who was a staunch loyalist of the former president during his tenure. Two of Bannon’s erstwhile co-defendants in that case, Brian Kolfage and Andrew Badolato, pleaded guilty to conspiring to commit wire fraud.

The bulk of the charges in Bannon’s state case accuse him of funneling Kolfage money despite the charity’s vow to use every dime on building the U.S.-Mexico border wall.