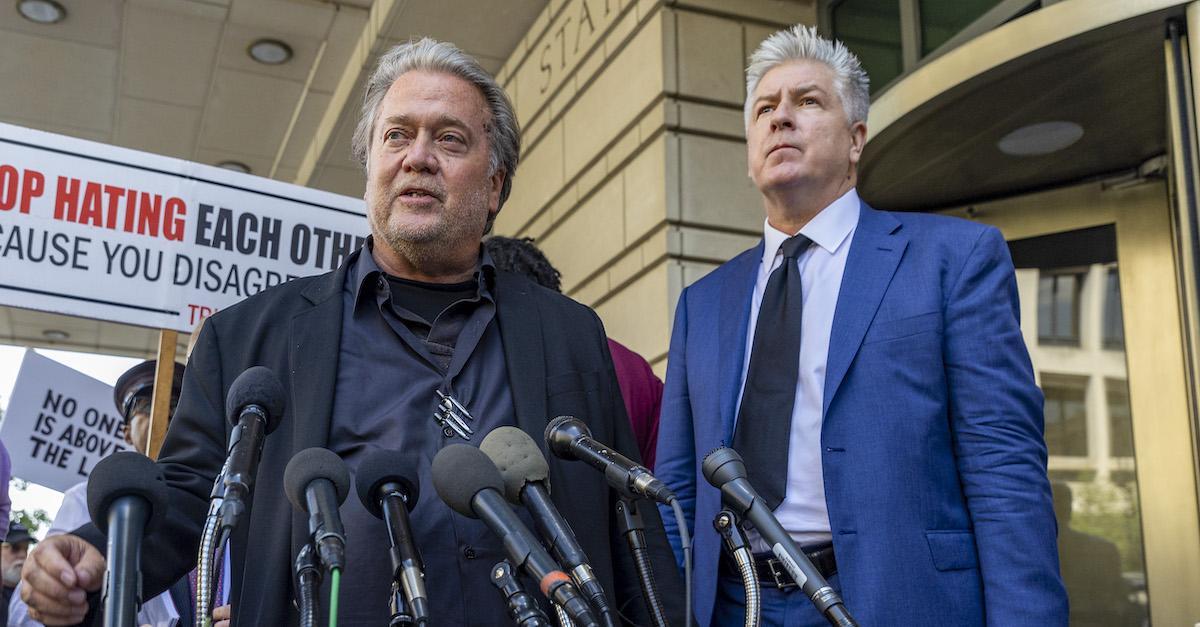 Former White House senior strategist Stephen Bannon and his lawyer Matthew Evan Corcoran talk to media outside the Federal District Court House after Bannon was found guilty of contempt of Congress on July 22, 2022 in Washington, D.C. Bannon’s legal team did not call witnesses, and Bannon did not testify in his own defense during the trial. (Photo by Tasos Katopodis/Getty Images.)

Steve Bannon, the stalwart Donald Trump ally and right-wing strategist facing criminal actions in multiple jurisdictions, has requested a light sentence for his contempt of Congress conviction and asked a judge to stay imposition of that sentence while he appeals his case.

Bannon was convicted in July on two counts of Contempt of Congress for refusing to comply with a congressional subpoena from the House committee investigating the Jan. 6 attack on the U.S. Capitol. The committee sought testimony from Bannon regarding the time he spent with Trump and other allies on Jan. 5, 2021; later that day, Bannon said on his podcast that “all Hell is going to break loose tomorrow.”

He has asked for a sentence of probation or home confinement, and for U.S. District Judge Carl Nichols, a Trump appointee, to stay the sentence as Bannon appeals his case.

Bannon’s sentencing memo, filed Monday, paints a dramatic picture of a high-stakes criminal case, with nothing less than the rights of all Americans at risk.

“The ear of a sentencing judge listens for the note of contrition,” the motion begins. “Someone was convicted. Did they learn their lesson? This case requires something more.”

It involves larger themes that are important to every American. Should a person be jailed when the caselaw which sets forth the elements of the crime is outdated? Should a person be jailed for the doing the exact same thing that was done by the highest law enforcement officers in this country, yet they received no punishment? Should a person who has spent a lifetime listening to experts – as a naval officer, investment banker, corporate executive, and Presidential advisor – be jailed for relying on the advice of his lawyers? Should a person be jailed where the prosecutor declined to prosecute others who were similarly situated – with the only difference being that this person uses their voice to express strongly held political views? If the answer to any of these questions is no, then a sentence of probation is warranted.

“Because we believe that the answer to each of these questions is no, we respectfully ask this Court to impose a sentence of probation, and to stay the imposition of sentence pending appeal,” says the motion, signed by Bannon’s lawyers Evan Corcoran and David Schoen, both of whom have represented Trump.

The “outdated” precedent to which Bannon refers is a 1961 U.S. Supreme Court case, Licavoli v. United States, which essentially held that a “good faith reliance on advice of counsel” is not a defense to a Contempt of Congress charge. Bannon’s lawyers have long insisted that the Licavoli case shouldn’t apply, because it “did not involve an assertion of executive privilege or a dispute between the branches of government.”

Bannon’s lawyers want to see that case overturned, and argue that “willfulness” in the context of a contempt of Congress charge should require “a showing of evil motive or purpose.” Currently, “willfulness” requires a person to know that the conduct is unlawful, and, according to Bannon’s lawyers, he could not possibly have known that because his reliance on his lawyers’ advice was done in “good faith.”

Bannon’s legal team says that if Licavoli is overturned, the judgment in his case “would be reversed.” His lawyers say that they want to give the U.S. Circuit Court for the District of Columbia the opportunity to revisit the case.

“This case presents a unique chance to update the law,” the memo says. “The current state of the law burdens subpoenaed congressional witnesses with navigating complex legal principles — such as executive privilege — that are the argot of lawyers, not laymen. The inherent risks of this approach cannot be understated.”

“The facts of this case show that Mr. Bannon’s conduct was based on his good-faith reliance on his lawyer’s advice,” the motion adds.

Prosectors have asked for a sentence of six months in jail, the “most severe guidelines-compliant sentence” available.

Sentencing is set for Friday.