Steve Bannon and ‘We Build the Wall’ Both Charged with Money Laundering, Conspiracy and Scheming to Defraud Trump Supporters 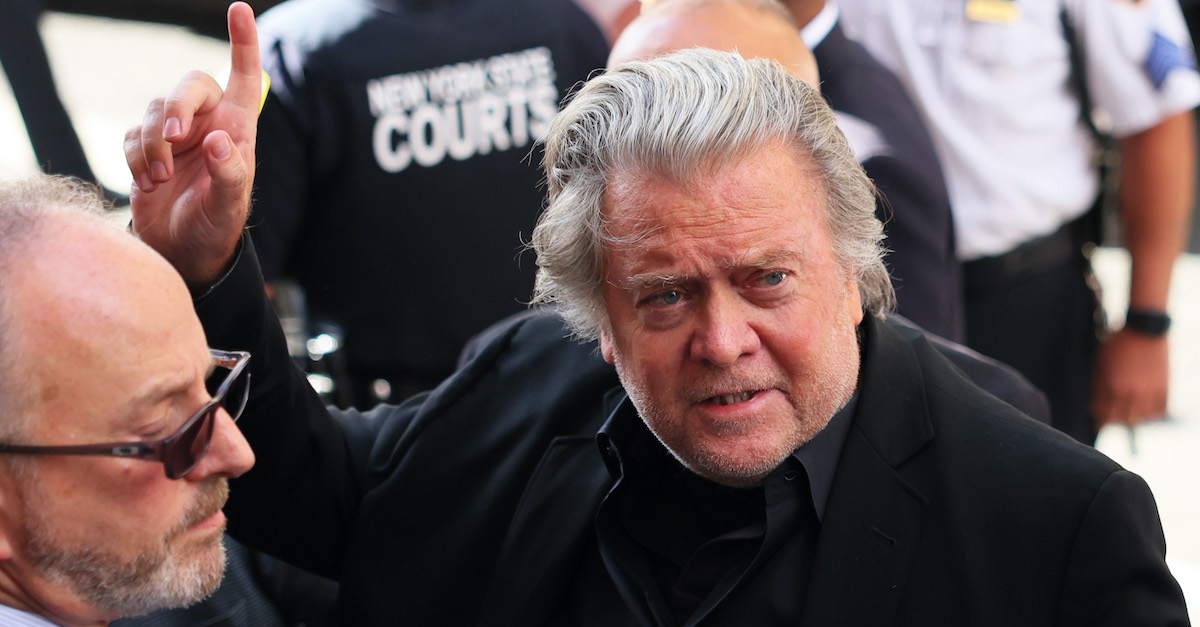 Donald Trump’s ex-chief strategist Steve Bannon surrendered to the Manhattan District Attorney’s office on Thursday to face an indictment on allegations that he defrauded donors of the We Build the Wall, a border-wall charity that also faces criminal charges.

The indictment, reported on Wednesday and unsealed for the first time on Thursday, contains similar allegations to the federal case that Bannon dodged through Trump’s pardon — with key differences. Federal authorities did not pursue charges against the non-profit group, even though two of its executives now stand convicted of conspiring to commit wire fraud.

Spanning 22 pages, the indictment’s charges include money laundering, conspiracy and scheme to defraud. The 501(c)4 nonprofit is charged under its corporate name WeBuildTheWall, Inc.

As for Bannon’s case, the doctrine of separate sovereigns allows state prosecutors to pick up a case similar to one brought by federal authorities. The federal indictment alleged that Trump’s former chief strategist pocketed $1 million of the $25 million in donor money raised, despite promises that every dime would go toward construction of a U.S.-Mexico border wall. The state charges do not specify the amount of the money that allegedly went to Bannon.

Both released statements in advance of their press conference and Bannon’s 2:15 p.m. arraignment.

“It is a crime to turn a profit by lying to donors, and in New York, you will be held accountable,” Bragg said. “As alleged, Stephen Bannon acted as the architect of a multi-million dollar scheme to defraud thousands of donors across the country – including hundreds of Manhattan residents. Each and every day, my office works to ensure that when New Yorkers hand over money, they know where it’s going and who it’s going to – without any smokescreens or false promises.”

James, who primarily handles civil matters, said in a statement that there “cannot be one set of rules for everyday people and another for the wealthy and powerful — we all must play by the same rules and must obey the law.”

“Mr. Bannon took advantage of his donors’ political views to secure millions of dollars which he then misappropriated. Mr. Bannon lied to his donors to enrich himself and his friends,” James said. “We will continue to take on fraudulent behavior in every corner of society, including white collar criminals, because no one is above the law.”

Though Trump pardoned Bannon of federal crimes, the former president didn’t extend the same courtesy to his co-defendants: Brian Kolfage, Andrew Badolato, and Timothy Shea. Two of the men, Kolfage and Badolato, admitted to conspiring to defraud the donors. Shea fought the charges at trial — and 11 jurors stood primed to convict him until deliberations were hung by a lone holdout.

Like its federal counterpart, the state charges are a speaking indictment, filled with the internal communications of We Build the Wall’s leaders. One of them sent a message to Bannon on Jan. 11, 2019, refers to the promise that every dime goes to charity as “remov[ing] all self-interest taint” and gives Kolfage “saint hood,” according to the indictment.

Other passages quote Bannon directly. On Feb. 12, 2019, Bannon allegedly told a media outlet: “I did this [work on behalf of We Build the Wall] kind of as a volunteer.”

Months later, Bannon is quoted saying at a fundraising event: “remember, all the money you give goes to building the wall.”