‘Trump Lawyers Turning Against Each Other’: Legal Experts React to Report That Christina Bobb Said She Was Told to Sign Alleged False Statement About Mar-a-Lago Docs 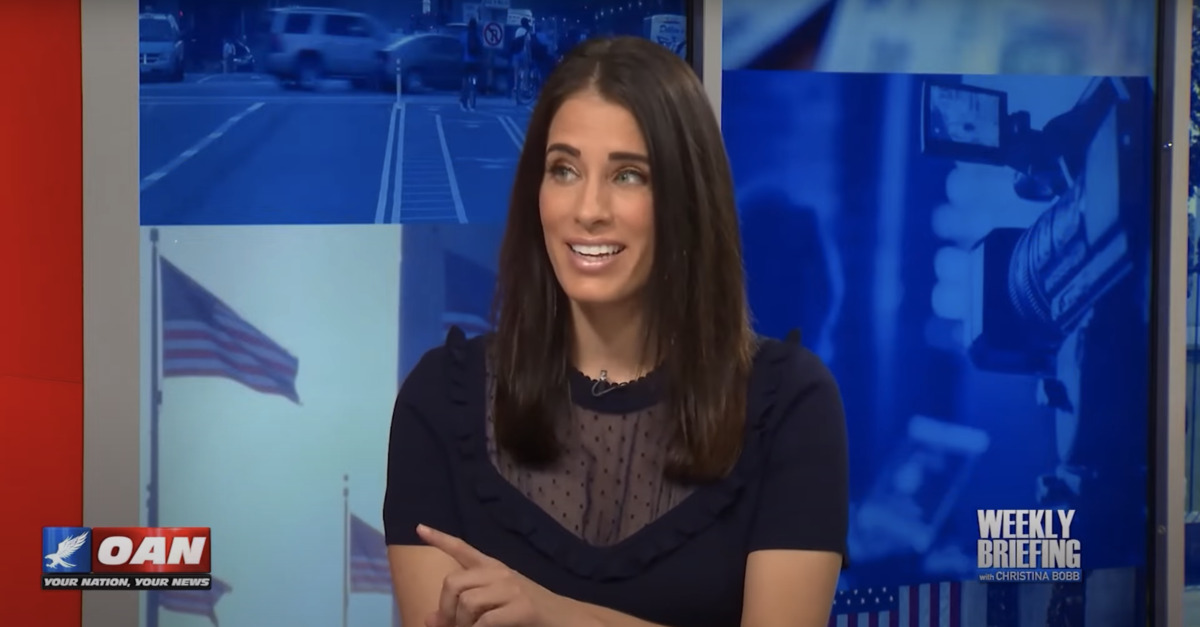 Christina Robb during her days as a commentator on the far-right One America News Network.

Legal Twitter was abuzz over recent reports that one of former President Donald Trump’s attorneys recently spoke with federal prosecutors about various details regarding allegedly classified documents discovered at Mar-a-Lago during an August FBI raid.

According to an NBC News report citing “three sources familiar with the matter,” that attorney, Christina Bobb, a onetime talking head on the right-wing network One America News Network, “named two other Trump attorneys involved with the case” during a recent talk with the U.S. Department of Justice.

As Law&Crime previously reported, Bobb signed a letter in June of this year averring that Trump had returned all documents subject to a May grand jury subpoena. That letter claimed the former president no longer had any documents identified as classified at his Florida estate. The statement Bobb signed, however, was allegedly authored by Trump attorney Evan Corcoran, according to The New York Times.

A mid-September report by the paper of record notes:

Investigators are seeking information from Ms. Bobb about why she signed a statement attesting to full compliance with the subpoena, and they have signaled they have not ruled out pursuing a criminal inquiry into the actions of either Ms. Bobb or Mr. Corcoran, according to two people briefed on the matter.

The attestation was drafted by Mr. Corcoran, but Ms. Bobb added language to it to make it less ironclad a declaration before signing it, according to the people. She has retained the longtime criminal defense lawyer John Lauro, who declined to comment on the investigation.

A late August report by CNN citing anonymous sources alleges that Bobb’s name appears in a DOJ court filing – albeit in redacted form. That filing contains a copy of the letter in question. The letter claims that a “diligent search” was undertaken by Trump’s legal team to ensure subpoena compliance.

According to NBC News’ report, Bobb told DOJ attorneys that Corcoran “drafted it and told her to sign it,” citing the anonymous sources.

The added language insisted upon by Bobb and referred to by the Times was reportedly a clarification that she would only certify Trump no longer had marked-as-classified records in his possession “based upon the information that has been provided to me.” Such information, Bobb allegedly told the feds, came from Corcoran.

Law&Crime reached out to Corcoran for comment on this story but no response was immediately forthcoming at the time of publication.

There is no indication by the latest developments that Bobb is being threatened with prosecution to move higher up the ladder.

“She had to insist on that disclaimer twice before she signed it,” one source reportedly told NBC News’ Marc Caputo. “She is not criminally liable. She is not going to be charged. She is not pointing fingers. She is simply a witness for the truth.”

“Bobb spoke to the Feds and told them that another Trump lawyer, Evan Corcoran, was the source of the false info in the certification she made regarding the Mar-a-Lago documents,” former federal prosecutor Renato Mariotti wrote. “If true, she is likely right that she has no liability. But now *he* is in the hot seat.”

A variation of the metaphor of heat was also employed by former Assistant U.S. Attorney, onetime general counsel for the FBI, and, most famously, Robert Mueller’s right-hand man during the Russiagate investigation, Andrew Weissmann.

“Bobb has passed the hot potato squarely to Corcoran to now tell DOJ how HE knew responsive docs had all been provided pursuant to the subpoena,” Weissmann tweeted. “Its [sic] a crime to intentionally not comply with a subpoena.”

Attorney and former special counsel for the U.S. Department of Defense, Ryan Goodman, termed the Monday NBC News report an instance of “Trump lawyers turning against each other” on Twitter.

“Inevitable,” mused former U.S. Attorney Harry Litman also via Twitter. “And the way cases get made. So an excellent development.”