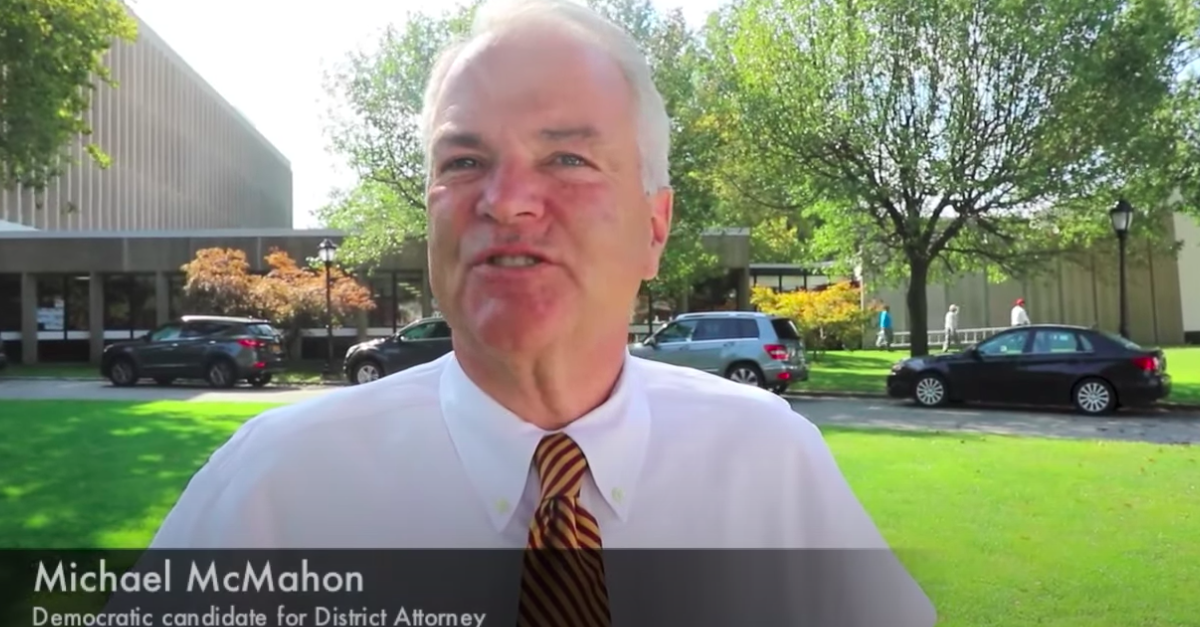 Staten Island District Attorney Michael McMahon, a Democrat, said his office will not prosecute police officers who violate the city’s law banning police from using any kind of chokeholds on criminal suspects if he thinks the violation was not intentional.

The “diaphragm law,” which went into effect earlier this month, makes it a misdemeanor for officers to do any of the following (this gets technical):  “restrain[] an individual in a manner that restricts the flow of air or blood by compressing the windpipe or the carotid arteries on each side of the neck, or sitting, kneeling, or standing on the chest or back in a manner that compresses the diaphragm, in the course of effecting or attempting to effect an arrest.”

McMahon released a statement on Friday saying that he definitely would not prosecute the crime in all circumstances, regardless of what the legislation calls for.

“Our office would not prosecute a police officer who accidentally pressed on an individual’s diaphragm in the course of making a lawful arrest,” he said.

McMahon went on to describe the regulation as unnecessary and possibly unconstitutional while imploring the city’s government to reconsider it.

“I know that our City Council legislators passed this bill and the mayor signed it into law to seize upon and make a relevant mark on a poignant and important moment in social justice history,” McMahon said. “Their intentions may be good, but the outcome and details leave much to be desired. I implore them to be leaders enough to admit that they went too far in their language and to repeal or fix this law as soon as possible. Common sense requires it, public safety depends on it.”

The Staten Island prosecutor’s statement came one day after New York City Police Chief Terrence Monahan was caught on tape telling a group of narcotics detectives that officers shouldn’t worry about being prosecuted for under the new law because no one would prosecute them.

“What happens to afraid cops is they end up dead and that’s what happened. That’s why there’s so many guns out there. We can’t be afraid. You got every DA come out and say they’re not going to charge that. We can’t be afraid to do what we do. We can’t walk away,” Monahan said in a video first published by the New York Post.

In a statement to NY1, the Legal Aid Society said McMahon had a “clear bias problem.”

“When it comes to prosecuting Black and Latinx New Yorkers, even with weak or false evidence, his office is quick to bring charges, demand exorbitant bail and force guilty pleas,” the organization said. “But when it comes to holding police officers accountable for committing heinous acts of misconduct, the NYPD can count on DA McMahon for special treatment.”