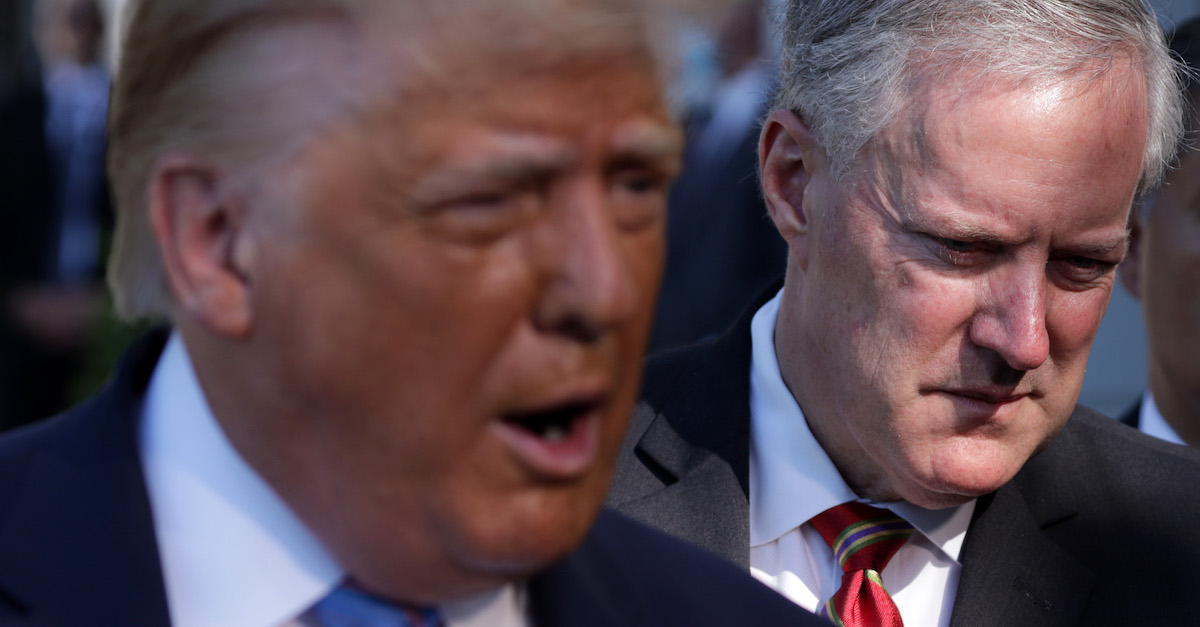 The South Carolina Supreme Court on Tuesday denied an effort by former Trump White House chief of staff Mark Meadows to avoid testifying before a grand jury investigating attempts by his former boss to subvert the 2020 presidential election.

In a unanimous, two-page, per curiam opinion, the Palmetto State’s highest court of appeal determined that Meadows’ arguments were “manifestly without merit” and affirmed an order by a lower South Carolina court directing him to testify.

The justices, all of whom are selected by the GOP-dominated state legislature, took up the matter the Monday before Thanksgiving.

The terse order does not explain why the former GOP congressman’s arguments were not accepted but does say the dismissal was filed in accordance with a South Carolina Supreme Court rule allowing court to “file a memorandum opinion dismissing an appeal, affirming or reversing the judgment appealed from, or granting other appropriate relief when, in unanimous decision, the Supreme Court determines that a published opinion would have no precedential value.”

That rule, 220(b)(1), additionally requires “a judgment of the trial court is based on findings of fact which are or are not clearly erroneous” or “that the evidence to support a jury verdict is or is not insufficient” or “that the order of an administrative agency is or is not supported by such quantum of evidence as prescribed by the statute or law under which judicial review is permitted” or “that no error of law appears.”

Again, however, the state high court did not go into detail.

Rather, Meadows is simply ordered to comply with the lower court ruling to provide testimony to special grand jurors as part of the long-running probe by Fulton County District Attorney Fani Willis (D).

In late October of this year, Judge Edward Miller of the Court of Common Pleas in Pickens County determined that Meadows’ testimony was “material and necessary to the investigation.”

Willis has been trying to obtain Graham’s testimony due to his alleged role in a phone call then-president Donald Trump made to Georgia Secretary of State Brad Raffensperger (R) and members of his staff in the weeks after the 2020 presidential election.

The nature of that phone call has been hotly disputed. During the discussion, Trump himself infamously asked Raffensperger to “find 11,780 votes” for the 45th president’s failed re-election effort.

Additionally, during that tumultuous time period, the onetime Tea Party representative from North Carolina received a feverish text from Ginni Thomas, the wife of U.S. Supreme Court Justice Clarence Thomas, urging him to “Release the Kraken,” an apparent reference to a series of failed election lawsuits filed by pro-Trump attorneys.

Meadows, who now lives in South Carolina, claimed, through counsel, that traveling out of state to testify before the special purpose grand jury would violate his “State Constitutional Right to Privacy.”