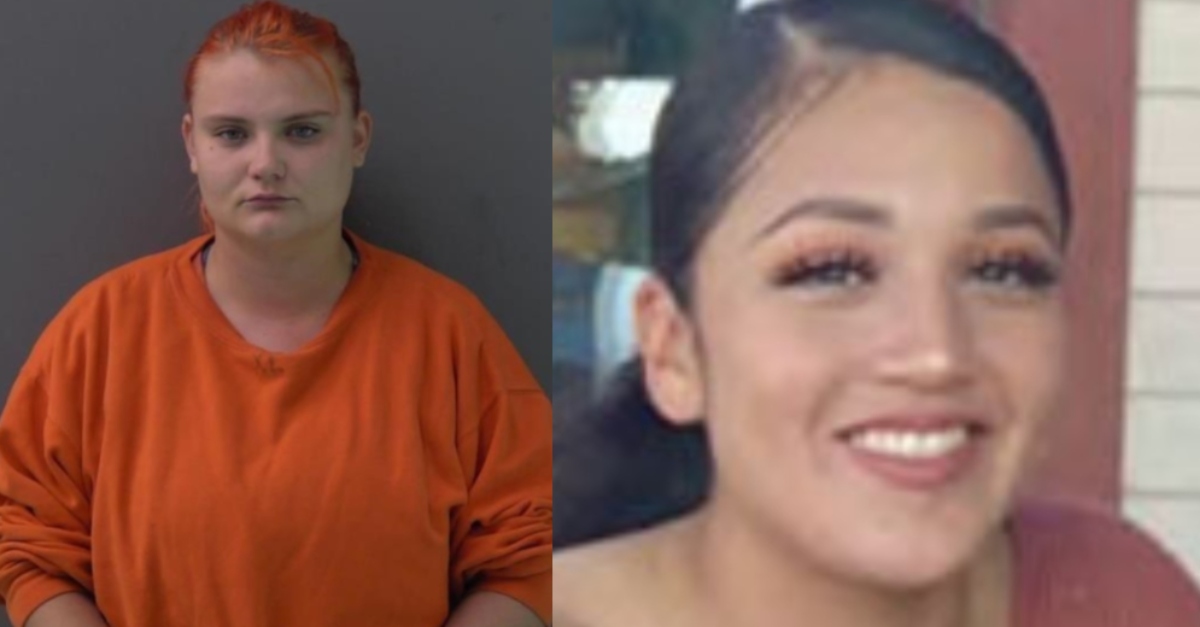 Cecily Ann Aguilar, 24, the girlfriend of the man who allegedly murdered U.S. Army Specialist Vanessa Guillen, pleaded guilty on Tuesday to one count of accessory to murder after the fact and three counts of false statement or representation, Justice Department spokesman Michael Lahrman told Law&Crime.

Specialist Aaron David Robinson, 20, who served with her in the U.S. Army, killed Guillen, whisked her body out of Fort Hood in Texas, and recruited Aguilar to dismember and hide the remains.

Guillen was last seen alive on April 22, 2020. Contractors discovered her remains while working on a fence by the Leon River in Belton Texas, on June 30. Robinson was confined to his barracks, fled, then later died by suicide after police confronted him in Killeen, Texas, authorities said. Army investigators said soldiers previously gave Robinson an incorrect alibi, leading to the case turning cold until Guillen’s body was discovered.

“They filled out affidavits that said they had seen Vanessa at a different time from when she had actually departed the other arms room [controlled by Robinson],” Secretary of the U.S. Army Ryan McCarthy said. This pretty much gave an “instant alibi” to the suspect.

The guilty plea on Tuesday will be the most justice that Guillen, 20, will ever have in criminal court.

Aguilar’s defense last year failed to get her confession tossed out. Prosecutors said that she voluntarily gave up that she helped get rid of Guillen’s body.

During that inquiry about Aaron Robinson, the Defendant voluntarily revealed her participation in the disposal of the body of V.G. after Aaron Robinson had killed her. The Defendant voluntarily assisted the agents in attempting to reach Aaron Robinson via her telephone to determine his location and to arrange a meeting with him. An agent later informed her that she was no longer free to leave and was under arrest. At that point, she was given her legal warnings pursuant to Miranda, which she indicated she understood. She continued to voluntarily cooperate with law enforcement, making additional statements and attempting to locate and persuade Aaron Robinson to surrender.

Aguilar pleaded guilty to one count of accessory to murder after the fact, and three counts of false statement or representation. She faces a maximum of 30 years in prison as well as three years of supervised release and a $1 million fine. Sentencing has not been scheduled.

“According to court documents, from April 22, 2020 through July 1, 2020, Aguilar assisted Army Specialist Aaron Robinson in corruptly altering, destroying, mutilating and concealing evidence—that is, the body of Vanessa Guillen—in order to prevent Robinson from being charged with and prosecuted for any crime,” the Justice Department said in a statement released Tuesday. “Aguilar also altered and destroyed information contained in a Google account of Robinson. During the investigation into the disappearance of Vanessa Guillen, Aguilar made four materially false statements to federal investigators.”

“Cecily Aguilar’s guilty plea today was another step on the long path toward justice for Vanessa, my client, and her courageous family,” Guillen family attorney Natalie Khawam told Law&Crime in a statement. “I will never stop fighting for my clients and will continue to seek and demand justice for victims and their families until it’s achieved.”

Her family had criticized the military, arguing officials did not initially take her disappearance or prior allegations of facing sexual harassment seriously. The Army promised reform. Guillen was promoted posthumously from private to specialist.

Guillén felt she could not approach her chain of command with allegations, her relatives said. “She felt if she spoke, something would happen,” sister Mayra Guillén told The Post. “I now realize everything leads back to them harassing her at work.”https://t.co/9pS7yLT3t2