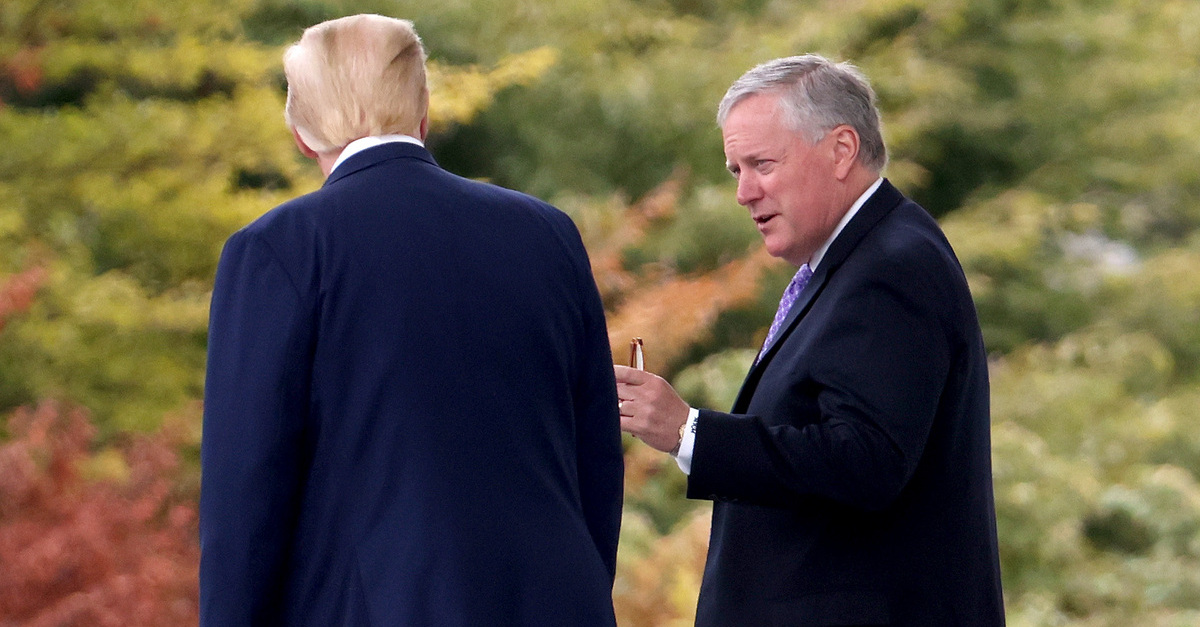 Donald Trump confers with then-Chief of Staff Mark Meadows while departing the White House on Sept. 1, 2020 in Washington, D.C.

The South Carolina Supreme Court will hear an appeal requested by former Trump White House Chief of Staff Mark Meadows that questions whether or not he should be forced to testify in Georgia about the 2020 election.

The Court granted a Rule 204(b) request to hear the case, according to a Monday order. The rule reads as follows:

Meadows was a key figure in the former president’s efforts to reverse the 2020 election outcome, and Fulton County District Attorney Fani Willis (D) has sought his testimony before a grand jury empaneled in Georgia.

“This case concerns issues of significant public interest and legal principles of major importance such that certification is warranted under Rule 204(b),” attorneys for Meadows wrote on Nov. 17, 2022 while asking the South Carolina Supreme Court to accept the case. “Mr. Meadows seeks vacatur of the Circuit Court’s order compelling him to testify before a Georgia special purpose grand jury under South Carolina Code § 19-9-20.”

The cited statute, in relevant part, defines the word “witness.”

Meadows pointed the court to a looming Nov. 30, 2022 deadline in Georgia as one reason why the state Supreme Court should take the case. Given the timeline, Meadows asked the state Supreme Court to hear the matter before an intermediate appellate court, the South Carolina Court of Appeals, could weigh in on the controversy. In essence, by accepting the Rule 204(b) certification, the state high court allowed Meadows to jump ahead in line and seek its review without taking the usual path through the court of appeals first.

“The Court should therefore grant certification and reverse,” they concluded.

Meadows asked the state Supreme Court to rubbish the order requiring him to appear in Georgia along these grounds:

Next, Meadows argued that Georgia’s “certification and its finding of materiality has expired” as yet another reason why he should not be ordered to testify:

As Georgia’s petition makes clear, the purported obligation on Mr. Meadows was to appear and testify on a specific date. This is not a request with an ongoing legal obligation to cooperate, but rather a demand to appear on a date that has now come and gone.

Thus, he argued, “this controversy is moot”:

The citizens of South Carolina have a strong interest (and one backed by important legal principles) in ensuring that only procedurally sound out-of-state certifications are enforced. Additionally, the Fulton County certification seeks information protected by executive privilege, rendering Mr. Meadows’s testimony immaterial. Finally, the lower court’s order failed to respect Mr. Meadows’s constitutional right to privacy, which will be invaded by compelled testimony before the special purpose grand jury. The Fulton County District Attorney has already widely publicized the findings of the ongoing investigation, and there is no doubt that she and the special purpose grand jury will continue to do so.

The circuit court order that required Meadows to testify was largely premised on the U.S. Constitution’s Full Faith and Credit clause. In a footnote, for Meadows said that clause “does not apply” to this case “because the question before the Court is (and was) whether the special purpose grand jury constitutes a grand jury under South Carolina law, not whether it is engaged in a criminal investigation under Georgia law.”

“A grand jury is defined by the power to issue bills of indictment, not by the fact that it investigates crimes,” Meadows’ attorneys continued in an attempt to draw a distinction that the state Supreme Court might find acceptable.  “If a criminal proceeding is defined by investigation of potentially criminal conduct and the ability to issue a recommendation, any government body could conduct a criminal proceeding. And, under the Fulton County District Attorney’s construction of the law, if that body included the words ‘grand jury’ in its name, it could avail itself of the Uniform Act.”

“Georgia, or any other State, cannot merely title some government body a ‘grand jury’ in name and then force South Carolina courts to coerce citizens to travel out of state, since that is not the law adopted by the people of South Carolina in the form of the Uniform Act,” Meadows’ attorneys reiterated.

Later, Meadows’ attorneys leaned in on the argument that the former chief of staff is not a “material witness” in the Georgia probe.

“Mr. Meadows’s testimony is subject to a sweeping and valid claim of executive privilege, rendering his potential testimony immaterial,” they asserted to bolster that point. “Additionally, his claim of privilege is the subject of ongoing litigation in the federal courts.”

Mr. Meadows has been instructed by the former President to preserve certain privileges and immunities attaching to his former office as White House Chief of Staff that prevent him from being compelled to testify about his work with and on behalf of then-President Donald Trump. Most relevant here are the protections of executive privilege, which reach Mr. Meadows’s communications “in the course of preparing advice for the President,” In re Sealed Case, 121 F.3d 729, 752 (D.C. Cir. 1997), and any materials that reveal his or other executive officials’ pre-decisional deliberative processes. See Army Times Publ’g Co. v. Department of the Air Force, 998 F.2d 1067, 1070 (D.C. Cir. 1993). Mr. Meadows was the most senior advisor to the President, and the confidentiality of his deliberations and communications is protected by the Constitution of the United States as necessary to a healthy executive branch. See United States v. Nixon, 418 U.S. 683, 708, (1974). The privilege protects Mr. Meadows interactions with the former President, his deliberations with the former President’s other senior advisors, and the processes by which he formulated advice for the former president.

Later, Meadows’ attorneys balked that the Georgia proceeding constitutes a “grievous intrusion on Mr. Meadows’s privacy” because the proceeding will be detailed in a public report.

“This intrusion into Mr. Meadows’s rights is wholly unlike the intrusion worked by a true grand jury subpoena,” the document suggests. “True grand jury proceedings are secret, and the invasion of witness’s privacy is minimal.”

The full Nov. 17 motion which urged the state Supreme Court to hear the case is here.