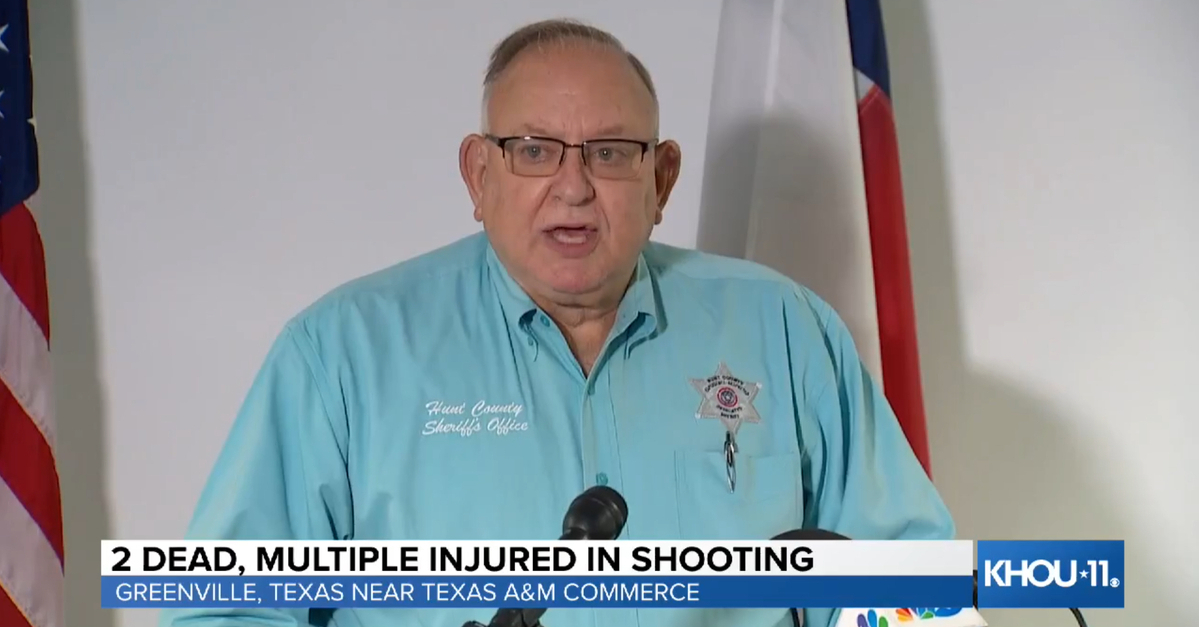 An additional 12 people suffered gunshot wounds; two other individuals were harmed in the aftermath as they tried to escape.

During a Sunday morning press conference, Hunt County Sheriff Randy Meeks told media that authorities “do not have any solid suspect information” at the time “due to the many different descriptions being provided by those in attendance” at the party.

Texas A&M officials later clarified that the party, though student-heavy, was not sanctioned by the university itself.

The first deputy arrived on the scene at around 11:41 p.m., according to authorities, in order to respond to multiple traffic complaints due to party goers parking on the shoulder of State Highway 380. Additional deputies arrived soon thereafter to deal with the traffic situation.

Shots were reportedly fired at around 12:05 a.m. Five minutes later, the shooting was audibly over and sheriff’s deputies ventured into The Party Venue, in order to identify the victims, police said.

“In the chaos, our suspects were able to flee the scene,” Meeks continued, “and we are working on identifying them at this point.”

There were around 750 people inside the “small structure” where the party was located, police estimate. As of Sunday morning, Hunt County authorities say they have interviewed roughly 20 witnesses but have so far, failed to elicit much in the way of useful information.

“We need to get him off the street as quickly as possible,” Meeks said of the suspect. “We have very, very little to go on right now.”

The sheriff refused to speculate as to why, in his opinion, witnesses were being largely uncooperative with investigators so far.

“It appalls me that as many folks that were there have not been able to give us a better description of the shooter,” Meeks opined. “I just know we haven’t been able to get much cooperation.”

“I really beg them to get their children to give us information,” Meeks added, when later asked about the victims’ family members.

Authorities say the suspect does not pose a threat to public safety.

“We believe this was a separate incident,” the sheriff said. “There might have been somebody there that was targeted. We’re not for certain. We’re still trying to follow up on those leads.”

“The shooter came in the backdoor and the first victim, we think, may have been his target victim,” Meeks said when pressed on his assessment by a reporter. “We’re going by theory and circumstantial evidence that we have–the rest of them were random.”

Asked to contextualize the tragedy, Meeks attempted to downplay the shooting’s applicability to everyday life in North Texas.

“First off, the amount of people that were there, just the overcrowdedness of it, it gave the opportunity to the shooter to accomplish whatever he wanted to accomplish,” Meeks said. “When you have this many people in one place, it’s an easy target for somebody. And then, we just had one security guard there. There was no way he could control everything that was going on there.”

When questioned about the shooter’s brazenness of committing a mass shooting with multiple sheriff’s deputies in attendance, Meeks said it was likely the suspect was already at the homecoming party “when the deputies arrived” to deal with the traffic complaints.

“I think anything like this is going to be something hard to deal with,” Meeks said. “It’s not something we deal with every day. This is the first time I’ve dealt with something of this magnitude in my career.”

Meeks then pivoted to discussing a pre-planned public seminar on the mind of a mass shooter being hosted by his office next weekend.

“Wish we’d have had it a week before now.”