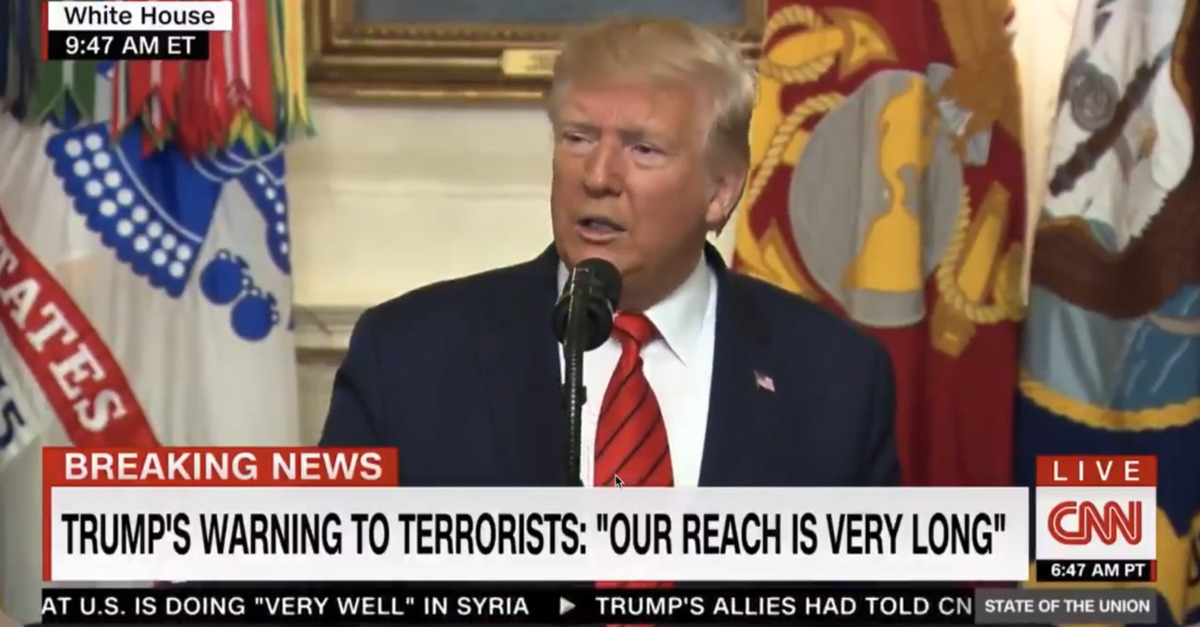 “We are leaving soldiers to secure the oil,” Trump said. “And we may have to fight for the oil. Maybe somebody else wants the oil, in which case they have a hell of a fight.”

“The oil is so valuable,” Trump added later during the press conference. “For many reasons. It fueled ISIS: number one. Number two: it helps the Kurds. Because it’s basically been taken away from the Kurds. They were able to live with that oil. And number three: it can help us because we should be able to take some also. And what I intend to do, perhaps, is make a deal with an Exxon Mobil, or one of our great companies, to go in there and do it properly. Right now it’s not big–it’s big oil underground. But it’s not big oil up-top. Much of the machinery’s been shot and dead. It’s been through wars.”

The 45th president then reminisced:

President Trump tells the truth for once–it’s all to “Protect the Oil” pic.twitter.com/mvTRHXpbr0

Trump argued Iraq should have paid America back for the invasion that decimated the country and killed up to 500,000 innocent people.

“I will secure the oil” due to the “tremendous money involved,” Trump added, saying Iraq “discriminates against America in oil leases. We go in, we lose thousands of lives, spend trillions of dollars, and our companies don’t even have an advantage in getting the oil leases.”

Experts previously dismissed Trump’s desire to expropriate the oil reserves of other countries as blatant violations of international law.

“In international law, you can’t take civilian goods or seize them. That would amount to a war crime,” Anthony Cordesman, the Arleigh Burke Chair in Strategy at the Center for Strategic and International Studies, told the Guardian during the 2016 presidential campaign. “Oil exports were almost the only Iraqi source of money. So you would have to pay for government salaries, maintain the army, and you have triggered a level of national animosity far worse than we did. It would be the worst kind of neo-colonialism. Not even Britain did that.”

“It is hard to overstate the stupidity of this idea,” he wrote. “Even our allies in the Middle East regard oil in their lands as a gift from God and the only major source of income to develop their countries. Seizing Iraq’s oil would make our current allies against Isis our new enemies. We would likely, at the least, have to return to the massive military expenditures and deployment of American troops at the war’s peak.”

“Just to be clear: despite Trump’s statements, oil in Syria does not belong to the United States or to Donald Trump,” noted University College London Professor and political scientist Brian Klaas. “Plundering oil, as Trump seems to be suggesting, would be a violation of international law and could amount to a war crime.”

Attorney and legal commentator Luppe B. Luppen suggested the proposal was the most important aspect of Trump’s press conference.

“Lot to talk about from this presser, but the announcement that imperial looting of oil resources is fully operational in Syria, and is directly tied to campaign rhetoric we were told not to take literally, should not get short shrift,” he tweeted.

“Agreed,” Goodman wrote, in a Twitter post linking to a primer by left-of-center law blog Just Security on the reasons why such efforts are unlawful, “taking oil—pillage—is illegal under international law.”

In legal terms, the concept Trump has endorsed vis-à-vis Syrian oil, would be termed “pillage” under international law.

The International Committee for the Red Cross (ICRC) explains:

The prohibition of pillage is a long-standing rule of customary international law already recognized in the Lieber Code, the Brussels Declaration and the Oxford Manual. Pillage is prohibited under all circumstances under the Hague Regulations. Pillage is identified as a war crime in the Report of the Commission on Responsibility set up after the First World War, as well as by the Charter of the International Military Tribunal (Nuremberg) established following the Second World War. The Fourth Geneva Convention also prohibits pillage. Under the Statute of the International Criminal Court, “pillaging a town or place, even when taken by assault,” constitutes a war crime in international armed conflicts.

The ICRC also notes that many nations’ own military manuals and domestic legislation prohibits such war-time theft.

“Somehow Trump always gravitates toward the unlawful,” said Human Rights First Advocacy Counsel Benjamin Haas after the Sunday morning press conference. “US exploitation of this oil would be a clear violation of international law. And no domestic legal basis for it—e.g., there’s no way that any congressional authorization currently on the books would cover appropriating this oil.”