‘She Well-Planned this Escape Down to a T’: New Charges and New Evidence in Case of Missing Sheriff’s Deputy Who Allegedly Helped Her Inmate Paramour Escape 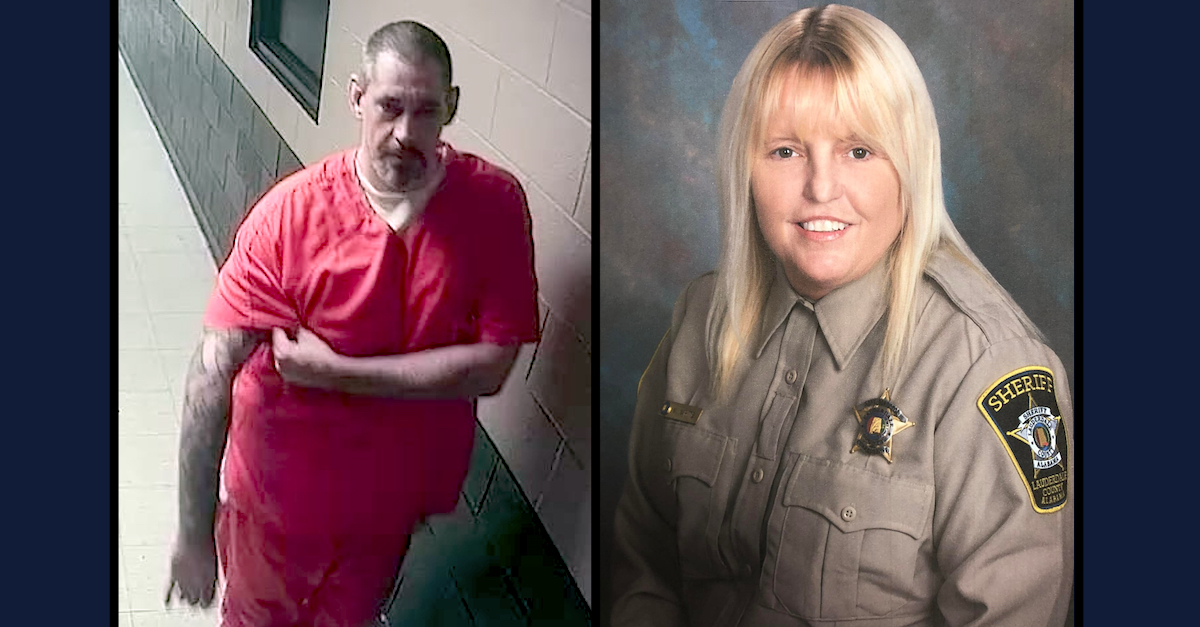 Update: Authorities announced Monday evening that the suspects were taken into custody after a police chase and crash in Indiana. Casey White surrendered and Vicky White shot herself, according to investigators. She died at a hospital on Monday night.
—

New criminal charges have been filed against a former Alabama sheriff’s deputy who worked as a local jail guard–and who is currently believed to be on the run for assisting a 6’9″ inmate’s recent escape.

Vicky White, previously identified by law enforcement as “Vicki” White, allegedly helped accused murderer Casey White (no familial relation) go on the lam in late April by faking a mental health appointment for the inmate–and by allegedly violating department protocol by driving him to the fake appointment by herself.

The two were last seen at around 9:30 a.m. on April 29. Perhaps because White was the Assistant Director of Corrections for the Lauderdale County Sheriff’s Office, no one questioned her story, or her atypical method of transport, until around 3:30 p.m.

After a few days of trepidatious statements about jumping to conclusions, and a multi-agency investigation, charges were filed against the former law enforcement officer on May 2.

Initially, Vicky White was charged with permitting or facilitating an escape in the first degree.

One week later, she was additionally charged with forgery and identity theft over her alleged use of an alias to purchase one of the getaway vehicles in the couple’s still-extant efforts to evade detection.

Specifically, she has been charged over her alleged purchase of the 2007 Ford Edge that is believed to have been used to put several hours and more than one hundred miles of distance between the duo and local law enforcement. At first, the pair were traveling in Vicky White’s marked law enforcement vehicle, but that car turned up relatively early, at a nearby parking lot, several hours before the Lauderdale County Sheriff’s Office realized what had even occurred.

“If she was using her own identity, that would make it fairly easy for us to maybe find her,” Lauderdale County Sheriff Rick Singleton told CNN in a recent interview. “We do know she used a false identification to purchase a car here locally. She had two false IDs that we’re aware of, and I wouldn’t be shocked if she had additional or new ones now.”

The second car, a copper-colored SUV, was also found before law enforcement was sure about the circumstances of the vanishing act.

On May 6, 2022, the Ford Edge was found in a towing yard roughly 45 minutes south of Nashville, Tennessee. The SUV had reportedly been abandoned in the woods and reported as such. Authorities believe the pair may have tried to paint the car a different color and failed, or were otherwise forced to leave it because of mechanical problems.

“We know now where the car is, we know what direction they went,” the sheriff said. “We’re trying to canvass the area for any witnesses, also trying to research, see if any stolen vehicles were reported in that area during that time.”

Late on Monday, U.S. Marshals said their investigation had taken law enforcement to Evansville, Indiana where a third vehicle believed to have been used by Vicky White and Casey White was discovered. That truck, a 2006 Ford F-150, was found abandoned at a car wash on May 3, 2022.

Singleton also said additional evidence has been uncovered that shows how meticulously the escape was planned.

Surveillance footage allegedly shows Vicky White shopping for men’s clothes at a department store, apparently so that Casey White had a “change of clothes,” and at what the sheriff referred to as an “adult store.”

“It just tells us that it was very well planned and calculated,” Singleton added. “Obviously she well-planned this escape down to a T.”