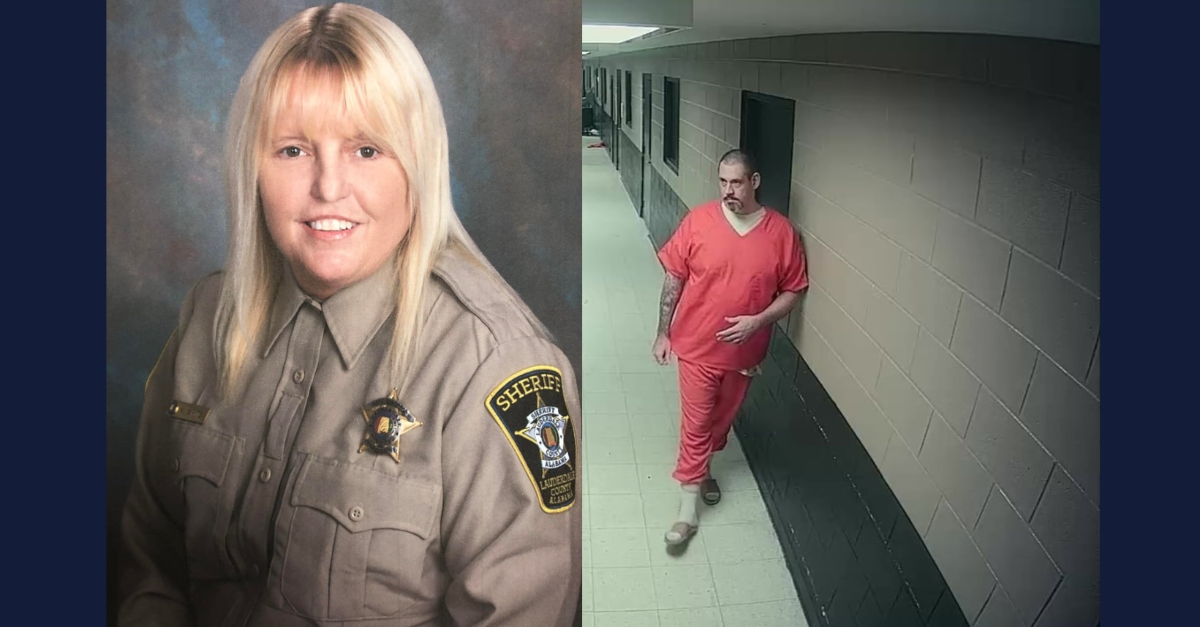 To those who worked with her over the years, Assistant Director of Corrections Vicki White was a well-respected member of the Lauderdale County Sheriff’s Office in Alabama. Authorities announced Monday, however, that she now faces a criminal warrant for allegedly helping 38-year-old murder suspect Casey Cole White (no relation) flee jail.

“We know she participated,” said Sheriff Rick Singleton, responding to a reporter’s question about whether the deputy was threatened into helping a murder suspect escape. “Now whether she did that willingly or if she was coerced, threatened somehow to participate in this escape, not really sure. But we know for sure, she did participate.”

Deputy White had been talking about retirement for three or four months, and her last day was this past Friday, the sheriff said.

Instead, however, deputy White mysteriously vanished that day with inmate White, who had been locked up at the jail in a capital murder case for allegedly stabbing Connie Jane Ridgeway, 59, to death in a 2015 murder-for-hire plot. He is already serving a 75-year sentence for crime span spanning several states.

“We thought we had closure for them to a point, and now that’s totally upside down,” the sheriff said.

Authorities originally said deputy White was taking inmate White to a court appearance that morning. Singleton has said that the law enforcement officer, a veteran of about 25 years, told her subordinates that she was taking Casey White from a mental health evaluation, and then she would get medical attention because she was under the weather. But traveling alone with inmates was a “strict violation” of policy, said Singleton, who suggested Deputy White was not questioned because of her seniority.

They never reached the court house, there were no evaluations scheduled, and White never turned up at any local urgent care locations, Singleton said.

In the update Monday, the sheriff suggested that deputy White’s story about feeling under the weather was an “excuse.”

He also said there’s surveillance footage of the patrol car at Humphrey Road and Cox Creek Parkway, two blocks from where it was found at a parking lot. The Whites had left the jail at 9:41 a.m.; the surveillance footage was timestamped at 9:48 a.m. What that told investigators is that the vehicle went straight to the parking lot, the sheriff said. There was not enough time for them to go from the jail to the courthouse and then the parking lot.

The charge against the deputy is permitting or facilitating an escape in the first-degree. Investigators are reviewing video footage, phone calls, and “everything we have” to see if both she and inmate White communicated with each other before Friday.

“In her job, she was throughout the detention center,” the sheriff said. “On a regular basis, several times a day, walking the halls. So she had several opportunities each day to be in contact with any given inmate.”

He noted that the deputy sold her home about a month ago, and he suggested she had cash at hand from the sale. A reporter asked if investigators are looking into whether the two had a romantic relationship.

By all accounts, the disappearance shocked those who knew Deputy White.

“Those of us who worked with Vicki White, and have worked with her for years, this is not the Vicki White we know by any stretch of the imagination,” Singleton said Monday. “She has been an exemplary employee. I was told by the director of the jail that Friday night, it was like you was in a funeral wake.”

Deputy White’s mother Pat Davis told WAAY in a Monday report that everyone who knew her daughter said this does not make sense. She feared for her daughter’s safety, and said she should turn herself in even if she did help White flee. She said she and her daughter have been living together since the sale of the house. She voiced doubt that Vicki would help an inmate escape. She said White–who rarely discussed work and never talked about retirement–never brought up Casey White.

“She’s never done anything, I bet she’s never even had a speeding ticket,” Davis said. “But I mean, she’s always been–what I say–a good person. And like I say, this is all a shock.”

Singleton also voiced concerns for deputy White’s safety, and noted that inmate White was considered especially dangerous, though U.S. Marshal Marty Keely of the Northern District of Alabama said both Vicki and Casey White were considered dangerous and were “in all probability” armed. Keely urged people to call 911 instead of approaching them if seen.

The U.S. Marshals are putting up a reward of up to $10,000 for information leading to inmate White’s capture. Keely emphasized during the press conference that the murder suspect is 6 foot, 9 inches tall. Casey White would stand out at that height even if he changed his appearance, Keely said.

“We just hope that this has a good ending,” Singleton said.