She ‘Was a Co-Conspirator’: Wife of ‘Ruthless and Bloodthirsty’ Kingpin ‘El Chapo’ Gets Sent to Prison for Drug Trafficking, Money Laundering 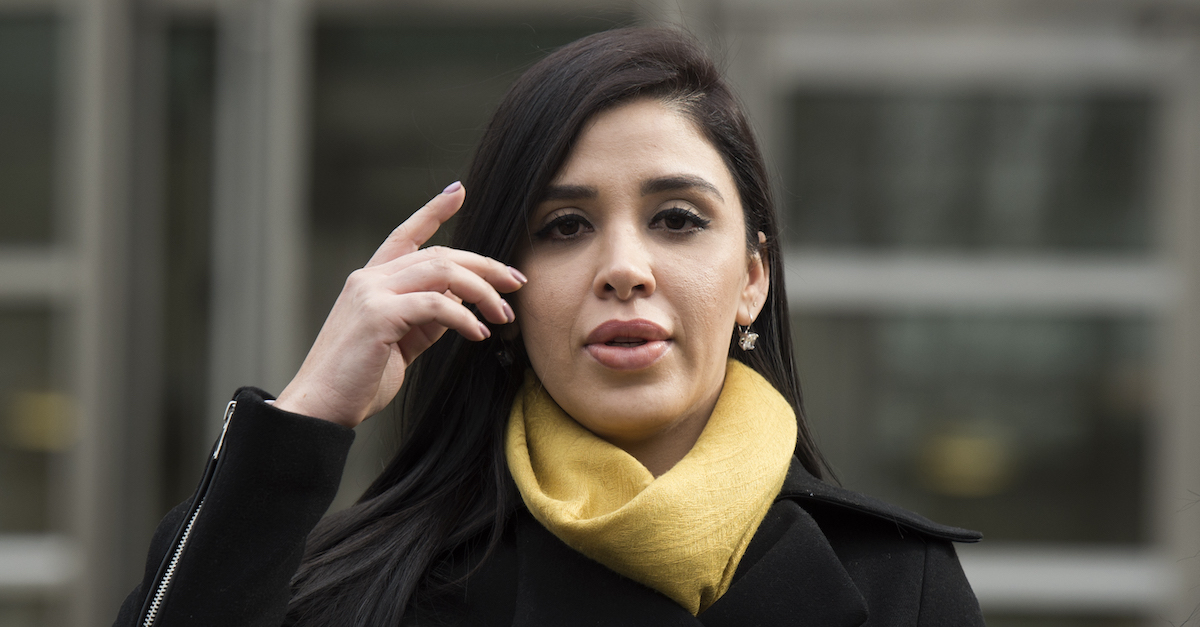 The wife of “El Chapo”, Emma Coronel Aispuro, exits the U.S. Federal Courthouse in Brooklyn after a hearing in the case of Joaquin “El Chapo” Guzman on February 3, 2017 in New York.  (Photo via Don Emmert/AFP via Getty Images.)

She pleaded guilty in June to conspiring to distribute heroin, cocaine, marijuana and methamphetamine, conspiring to launder money, and engaging in transactions and dealings of a designated foreign narcotics trafficker.

“Court documents indicate that beginning in or about 2011 and continuing to at least Jan. 19, 2017, Coronel Aispuro was a co-conspirator in the activities of the Sinaloa Cartel, an organization which was led by her husband, Guzman Loera,” the Department of Justice said in a press release.

Coronel is also believed to have helped facilitate his 2015 escape from a Mexican prison “by conducting planning meetings with other co-conspirators and by coordinating the movement of drug proceeds to finance the escape,” the DOJ said.

“To facilitate the escape, Coronel Aispuro assisted in the purchase of a property near the prison and provided Guzman Loera with a watch that contained a GPS tracking device, allowing co-conspirators to dig a tunnel from that nearby property, under the prison, to Guzman Loera’s cell,” the DOJ said. “Coronel Aispuro even relayed messages from Guzman Loera to other members of the Sinaloa Cartel regarding the operation of their illicit activities while he was detained.”

Guzman was convicted of drug trafficking in 2019. According to prosecutors, Guzman was a “ruthless and bloodthirsty” drug lord who maintained power by ordering the “killing, kidnapping and torture of individuals whom he believed were cooperating with law enforcement against his personal interests and the interests of the Sinaloa Cartel.”

He is currently serving a sentence of life in prison plus 30 years at a “Supermax” facility in Colorado. His lawyers argued in October that he deserves a new trial due to “breathtaking jury misconduct” and “stifling” solitary confinement at the jail where he was held during trial.

In charging documents, prosecutors alleged that Coronel “understood the drug proceeds she controlled during her marriage to Guzman were derived from [drug] shipments.”

“Coronel grew up with knowledge of the narcotics trafficking industry, and married Guzman when she was a teenager,” FBI agent Eric McGuire noted in an affidavit.

In addition to the 36 months in prison, Contreras sentenced Coronel to four years of probation. He also entered a forfeiture money judgment of nearly $1.5 million against Coronel “representing proceeds of and property obtained by Coronel Aispuro as a result of her drug-trafficking activities,” the DOJ press release said.