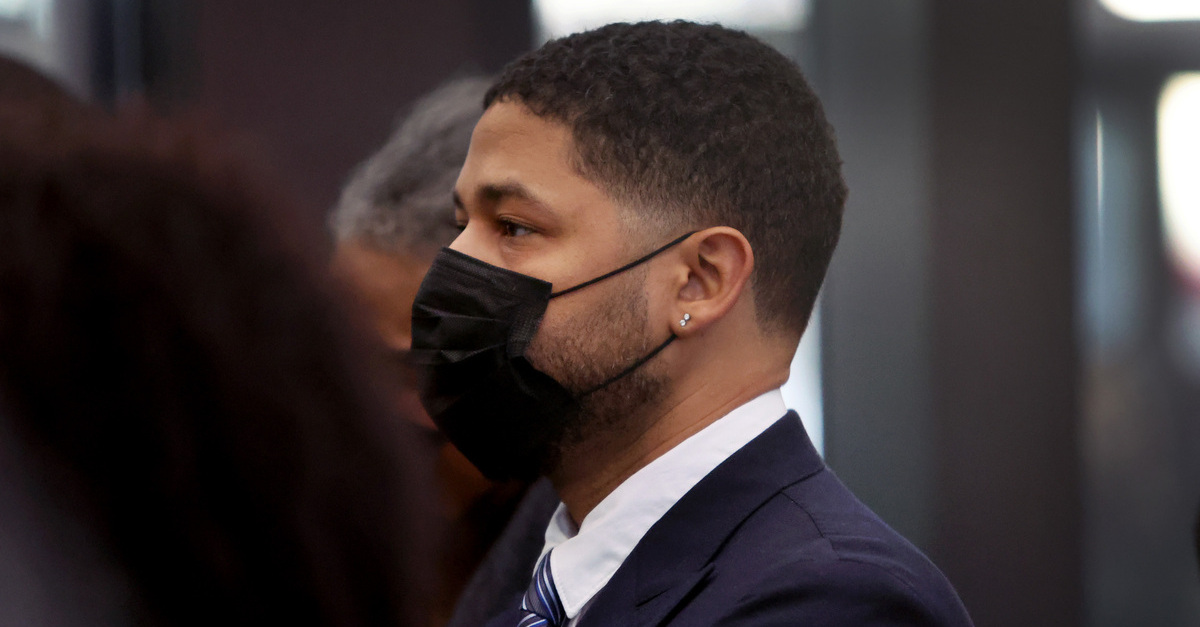 Former “Empire” actor Jussie Smollett arrives at the Leighton Courts Building for the start of jury selection in his trial on November 29, 2021 in Chicago, Illinois. Smollett is accused of lying to police when he reported that two masked men physically and verbally attacked him, yelling racist and anti-gay remarks near his Chicago home in 2019.

Day two of the disorderly conduct trial against actor Jussie Smollett focused on what the prosecution hopes to be a key piece of evidence in their effort to convince a Chicago jury that he orchestrated an elaborate homophobic and racist hate crime hoax in order to gin up sympathy and ultimately collect a hefty payday.

The defense, on the other hand, ridiculed the prosecution’s case as a “fantasy” of the highest order.

“I want you to attack me, but when you hit me, I want you to kind of pull your punches a bit because I don’t want to get seriously hurt,” Special Prosecutor Dan Webb said Smollett told the two brothers he allegedly hired to stage the January 2019 attack.

According to the Chicago Police Department, the former “Empire” star hired Abimbola Osundairo and Olabinjo Osundairo to slightly injure him as he walked home from a Subway restaurant on a cold, Chicago night because his studio shrugged off a “hate” letter he had previously received in the mail. Police and prosecutors insist Smollett wanted to make his studio pay–quite literally–for not taking that letter as serious as the actor wanted them to by bumping his salary.

Smollett instructed the brothers Osundairo to put a rope around his neck to “make it look more like a lynching, like a hate crime,” Webb alleged the actor said in the days leading up to the incident. The prosecution’s key piece of evidence during the first full day of testimony is a video of what Webb termed a “dry run” for the attack, which was famously blamed on “MAGA country” attackers yelling racial and homophobic slurs.

According to the Chicago Tribune, the prosecutor said that Smollett’s Mercedes can be seen on surveillance footage circling the intersection where the incident occurred as he showed his two alleged hired hands where he wanted the attack to go down.

The actor has stood by his original story for years.

Consistently dismissing the law enforcement narrative, Smollett directly addressed his charges in September 2020 and said that if the allegations against him were true, “the smart thing to do would be to admit that because at least there would be a place to work back from, you know what I’m saying. This is bullshit. It’s bullshit.”

Defense attorney Nenye Uche disputed the allegations against his client in darker terms, arguing that the brothers are the ones who lied to police because they hate Smollett and simply wanted to capitalize on his misery for the sake of their own careers.

“They are not some foreign exchange students from Nigeria,” Uche said. “They are sophisticated, highly intelligent criminals.”

The defense attorney went on to say that the two brothers were the only ones involved who changed their stories–and only did so after they were arrested upon a return trip from Nigeria.

The defense attorney went on to say that there was no physical or forensic evidence that ties his client to the alleged hoax. He also argued that Smollett wasn’t keen enough on the limelight to put himself in such a position following the incident.

“Jussie was not a person who liked attention,” Uche said. “Even his publicist was frustrated at him for that. It’s fantasy.”

Webb, on the other hand, argued exactly the opposite.

“By the time the police get there, Mr. Smollett has moved the knot closer to his throat,” Webb told jurors as he directed their attention to a surveillance still image allegedly showing the actor with the rope still on his neck. “He wanted it to look like something more serious.”

Smollett does potentially face several years in prison for the relatively minor offenses he’s been charged with but such a sentence, assuming an eventual guilty verdict, is exceedingly unlikely, due to his lack of a criminal record, wealth, and status.