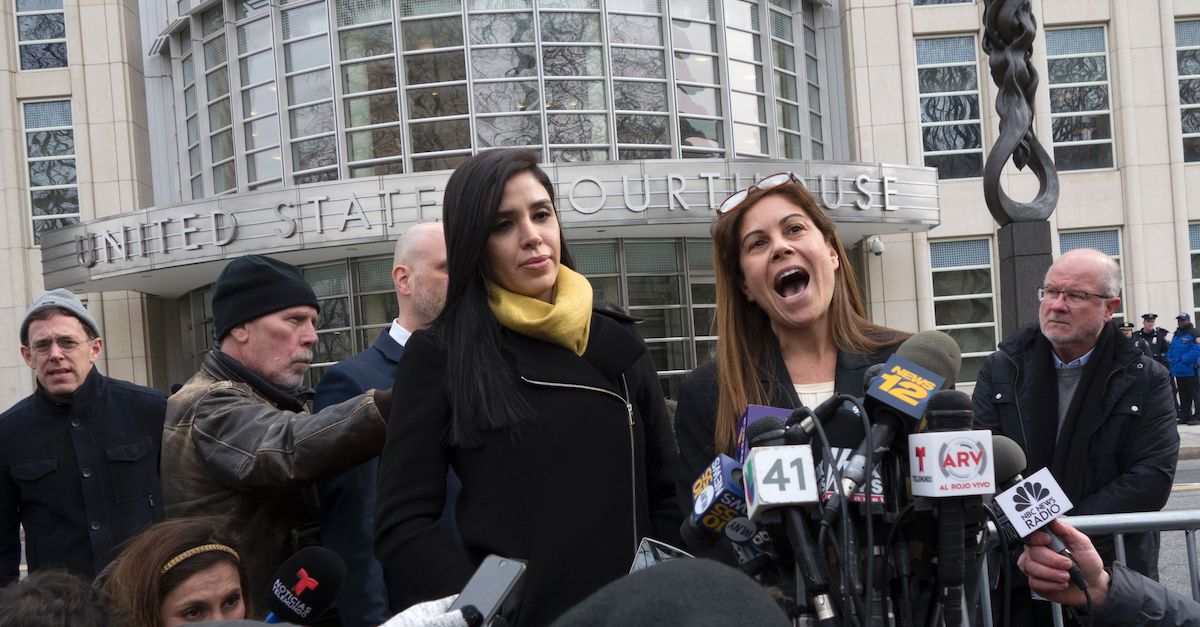 The wife of “El Chapo” Guzman, Emma Coronel Aispuro (L) listens as attorney Michelle Gelernt answers questions from reporters outside the US Federal Courthouse in Brooklyn after a hearing in the case of Joaquin “El Chapo” Guzman on February 3, 2017 in New York.

A 12-page affidavit filed by FBI Special Agent Eric S. McGuire largely details the ins-and-outs of alleged and multi-faceted conspiracies to spring Guzman from jails in Mexico in which Coronel is said to have played a key role. The complaint also alleges that Coronel helped her husband pass messages “in furtherance of drug trafficking activities” while he attempted to evade capture in the Mexican state of Sinaloa.

According to the FBI, Coronel “understood the drug proceeds she controlled during her marriage to Guzman were derived from [drug] shipments.”

The filing notes that Coronel was married to Guzman “when she was a teenager” and came into the cartel boss’s good graces because her father was a pivotal member of the organization who “coordinated narcotics transports.”

Once Guzman was arrested for the first time in 2014, Coronel maintained her note-passing efforts in service of her husband’s business interests, the FBI alleges, by allegedly re-delivering messages “she received from Guzmaan during her prison visits, which were not monitored by Mexican authorities.”

The court document contains one such alleged note:

Regarding Cleto, increase the production so that it yields. Say hi to Cleto. Tell him to please give me a hand, so that the first sale will be my part… because I have a lot of expenses here.

Agent McGuire alleges that the person named “Cleto” mentioned in the hand-written letter “is a drug trafficker based in Durango, Mexico who produces heroin” and claims that the reference to “expenses” was a “reminder to the recipient of the letter that Guzman had to pay bribes inside the prison and also continue to support his family.”

The FBI’s affidavit suggests, but doesn’t actually provide a timeline, that sometime after delivering this letter, an unidentified cooperating witness and Cleto allegedly gave Coronel “drug proceeds from more than 5 kilograms of heroin.”

“I believe that Coronel was acting as a go-between and messenger between Guzman and his lieutenants, associates, and sons,” McGuire alleges later on. “I further understand that Guzman continued to direct the drug trafficking activities of the Sinaloa Cartel from Altiplano prison through a number of individuals, including Coronel.”

Court documents are threadbare on the alleged and charged crime of drug trafficking aside from what read like allusions to Breakfast at Tiffany’s. In the 1961 Blake Edwards/Audrey Hepburn film (and the 1958 Truman Capote novella), Holly Golightly passes cryptic and coded messages to and from imprisoned mob boss Sally Tomato and his fake attorney—implicating herself in his massive drug ring.

The FBI spent most of its time documenting Coronel’s alleged participation in her husband’s successful escape from prison—and his second failed attempt.

According to the FBI, their witness was asked by Coronel to help plan her husband’s escape. They are said to have agreed and then later met with Guzman’s four sons to relay “instructions regarding the escape plan.” During that meeting, five of the six allegedly “agreed to organize the construction of an underground tunnel linked to Altiplano in order to facilitate GUZMAN’s escape from prison.”

Cooperating Witness 1, CORONEL, IVAN, ALFREDO, and OVIDIO all understood that the purpose of facilitating GUZMAN’s escape was to prevent GUZMAN’s extradition to the United States and to ensure his continued control over the Sinaloa Cartel and its drug trafficking activities.

According to Cooperating Witness 1, GUZMAN, through CORONEL, asked GUZMAN’s sons to purchase a piece of land near Altiplano prison and instructed Cooperating Witness 1 to purchase a warehouse near Altiplano prison as well as firearms and an armored truck. Those present also discussed the need to get a GPS watch to GUZMAN in prison in order to pinpoint his exact whereabouts so as to construct the tunnel with an entry point accessible to him.

The court document alleges that Coronel paid the witness some $100,000 in order to have her husband transferred back to the apparently easily-escapable Altiplano prison. But shortly after making that alleged payment and the promise of further cash, Guzman was transferred to a facility in Ciudad Juarez in the Mexican state of Chihuahua.

On January 19, 2017, Guzman was finally extradited to the United States. In July 2019, Guzman was sentenced to life in prison. Guzman ranted against the U.S. at sentencing.