Sexual Assault Charges Against Kevin Spacey Have Been Dropped

Cape & Islands District Attorney Michael O’Keefe said in a Wednesday filing that his office was dropping charges against actor Kevin Spacey, who was accused of sexually assaulting an 18-year-old bus boy at a bar.

“Now comes the Commonwealth [of Massachusetts], by and through its District Attorney, Michael O’Keefe, and hereby files a Nolle Prosequi in the above matter due to the unavailability of the complaining witness,” the filing said.

What nolle prosequi means in English:

Latin for “we shall no longer prosecute.” At trial, this is an entry made on the record by a prosecutor in a criminal case or a plaintiff in a civil case stating that he will no longer pursue the matter. In a criminal case, the statement is an admission that the charges cannot be proved or that evidence has demonstrated either innocence or a fatal flaw in the prosecution’s claim. An entry of nolle prosequi may be made at any time after charges are brought and before a verdict is returned or a plea entered. Most of the time, prosecutors need a judge’s permission to nol-pros a case.

CBS Boston reported that prosecutors met with the plaintiff and his family on Sunday and made it clear that “if he chose to continue to invoke his Fifth Amendment right, the case would not be able to go forward.” It seemed, in light of the nol-pros, that the accuser had every intention of continuing to plead the Fifth.

O’Keefe’s office put out a press release confirming that. 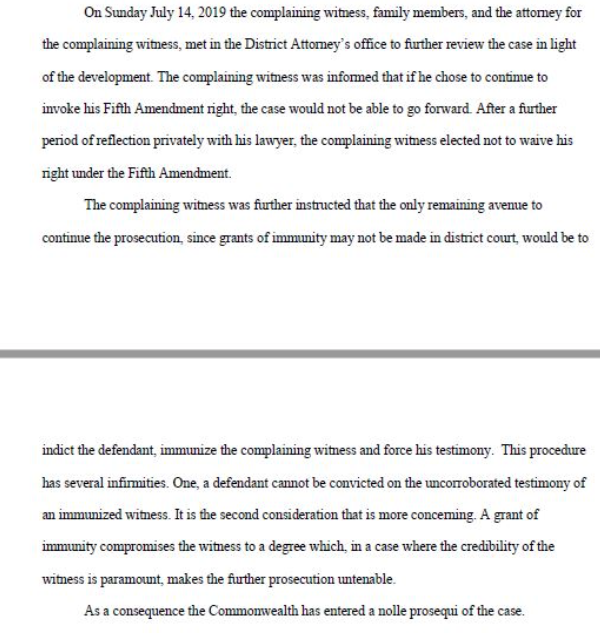 Law&Crime reported just nine days ago that it looked like the prosecution’s case was dead in the water. The DA confirmed that on Wednesday. The civil lawsuit against Spacey was dismissed with prejudice on July 5. The Spacey accuser’s attorney Mitchell Garabedian, who you may remember being portrayed in Spotlight, wrote in an email that the lawsuit was voluntarily dismissed. He would say that the case had been an “emotional rollercoaster” for the plaintiff.

It was initially alleged that Spacey got an 18-year-old bus boy drunk and fondled the teen under his pants without consent while visiting The Club Car in Nantucket, Massachusetts in July 2016. The accuser told investigators he texted his girlfriend about the incident and that he snapchatted video to prove it.

The accuser’s mother, Heather Unruh, reported the allegations against Spacey to police after, she said, Spacey caused “tremendous anger and anxiety” by groping her son. Unruh reported this alleged felony after others had already accused Spacey of sexual misconduct and assault (charges were dropped in September because of the statute of limitations).

But things have fallen apart since that time. While Spacey’s accuser pleaded the Fifth during testimony, Unruh admitted that she deleted data from her son’s phone before handing it over to the police.

“It makes the case against him much, much more suspect,” Law&Crime Network host Aaron Keller told Law&Crime after Spacey’s accuser pleaded the Fifth. “That an accuser is now pleading the Fifth after having been asked whether he deleted messages between himself and Spacey makes him look like he’s hiding something. Also problematic are reports that the accuser’s mother watched him testify after having been sequestered from doing so.”

Unruh, a former TV anchor, testified that she looked through her son’s phone to find footage purportedly showing Spacey sexually abusing her son.

“I was looking for the video,” she said.

Spacey’s defense suggested in questioning that she deleted data showing her son making racist and homophobic remarks, and having a “drinking issue,” so that he would seem believable to law enforcement investigating the case.

“You’re mistaken,” she said. “That was not my motivation.”

She insisted she saw things that “concerned” her, but that she didn’t delete anything to do with the case. Under direct examination, she said she only got rid of data of some of her son’s activities in college: Video of himself apparently using a bong in college.