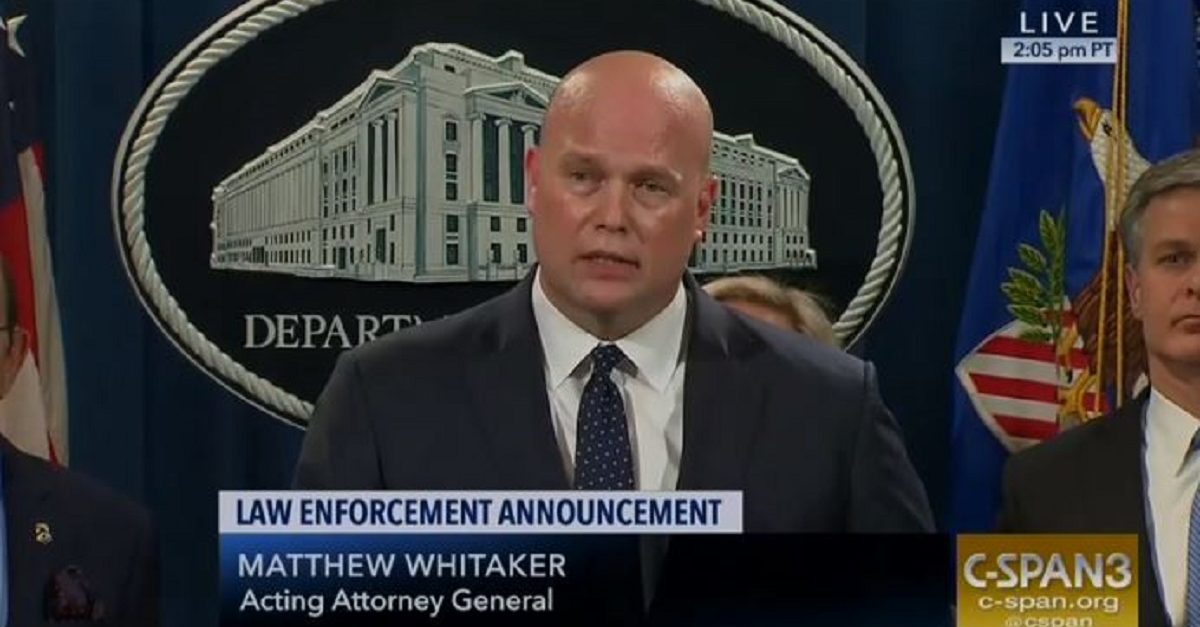 “I’ve been fully briefed on the investigation, and you know I look forward to Director Mueller delivering a final report,” Whitaker said. “I am comfortable that the decisions that were made are going to be reviewed through the various means we have … but right now the investigation is close to being completed and I hope that we can get the report from Director Mueller as soon as possible.”

Here’s the clip of Whitaker’s comments on the Mueller investigation, saying (1) he’s been fully briefed, (2) there will be a final report, (3) he thinks the investigation is close to being completed. pic.twitter.com/rwIXiQ7r6i

While there had been reports in the past that Mueller could be finishing up—with a report possibly coming as soon as February—this was the first time anyone with actual knowledge of the investigation had gone on record with a status update like this.

CNN legal analyst and former federal prosecutor Elie Honig was not impressed, to say the least.

Complete amateur (or worse?) move by Whitaker to announce publicly that Mueller is almost done. It’s inappropriate to comment publicly about the status of any ongoing investigation – not to mention a rookie-level tactical giveaway.

“Complete amateur (or worse?) move by Whitaker to announce publicly that Mueller is almost done,” he said, saying that’s it’s generally not proper to reveal the status of ongoing investigations. Honig also said it was “a rookie-level tactical giveaway” to reveal that Mueller’s probe may be winding down.

It is unknown if Mueller is planning additional indictments after charges were filed against Roger Stone, but the Special Counsel’s investigation has been known for keeping information under wraps, preferring to speak through court filings. Honig indicated that Whitaker erred by giving out information about the investigation at this stage.

Honig expounded on this in a Tuesday morning appearance on CNN’s New Day.

“You’re going to incentivize targets and witnesses to drag their feet to try to wait you out,” he said.

Former assistant US attorney @eliehonig says acting Attorney General Matt Whitaker’s comments that the Mueller investigation is close to being completed is “a strategic fumble.”

Whitaker’s revelation was not specific, however, as he did not give any kind of timetable for the investigation or say when he expects a report. The probe has been going on for years, so it’s unclear what he meant by “close to being completed.”

When contacted by Law&Crime about this, the Special Counsel’s Office declined to comment.

Unless Mueller releases his report in less than two weeks, it seems unlikely that Whitaker will even be involved once the investigation wraps up. The Senate is expected to vote on the confirmation of Attorney General nominee William Barr on February 11. If confirmed—which is expected, given Republican control of the Senate—Barr would be the one to receive Mueller’s report and then give his own report to Congress.

Barr said that it is important that Congress and the public be made aware of the investigation’s findings, and that he would consult with Mueller regarding his report.