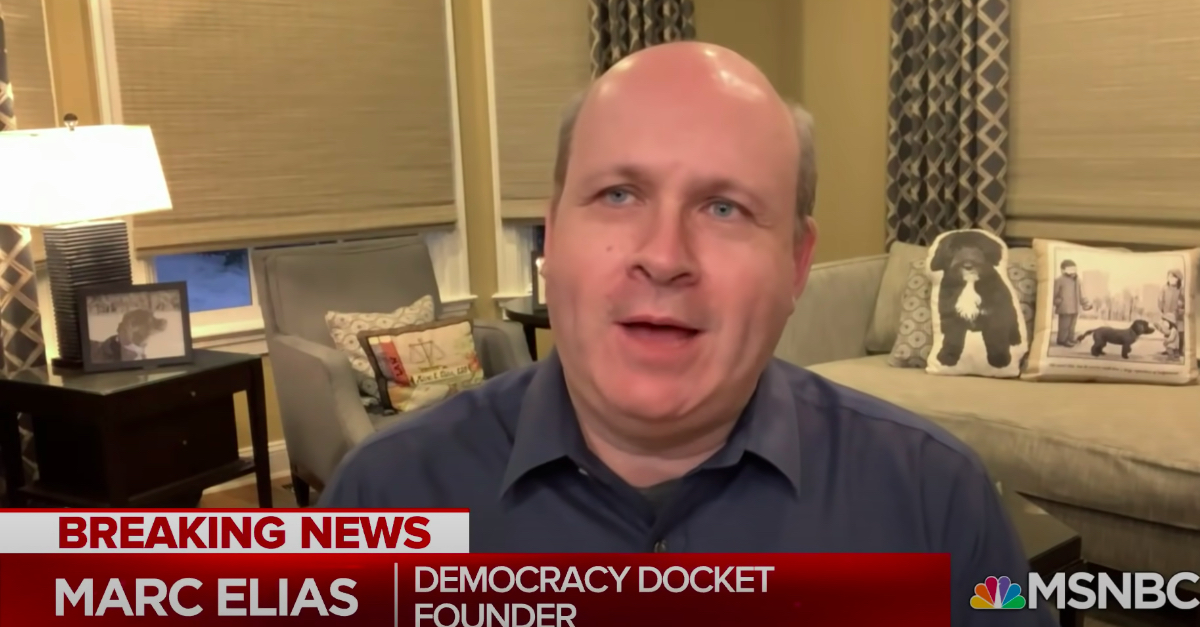 Attorneys for the Democratic Party filed a motion to intervene in Wisconsin state court on Tuesday in a lawsuit brought by conservatives who aim to stop the use of drop boxes in elections.

The effort to intervene on behalf of the Democratic Senatorial Campaign Committee (DSCC) is being led by powerhouse Democratic attorney Marc Elias’s Democracy Docket team. The lead attorney on the filing is Charles G. Curtis, Jr., who is registered to practice law in Wisconsin and also part of the Perkins Coie law firm.

“Plaintiffs’ litigation is the latest in [a] relentless attack, all undertaken with the aim of making it harder for Wisconsin voters to successfully cast ballots in the state’s elections,” the Democratic motion notes. “They seek to have all drop boxes declared illegal, no matter how secure and how carefully regulated.”

Originally filed by plaintiffs Richard Teigen and Richard Thom, who each describe themselves as a “registered Wisconsin voter and a taxpayer,” the lawsuit targets the Wisconsin Election Commission (WEC) and asks a Waukesha County court to bar the agency from authorizing the use of ballot drop boxes in upcoming elections.

Additionally, the plaintiffs, represented by attorneys with the far-right public interest law firm the Wisconsin Institute for Law & Liberty, want the court to force Badger State voters to mail or hand in their ballots to certain officials deemed valid by the plaintiffs (and their ideologically conservative attorneys and advisers) themselves.

From the original petition filed in late June:

Relying on what they term “strict compliance” with the above statutes–the phrase is repeated four times in the filing–the plaintiffs offer a novel interpretation that a ballot drop box authorized by the state’s electoral agency simply does not pass statutory muster.

“WEC Commissioners sent a memo to municipal clerks dated August 19, 2020, stating that absentee ballots do not need to be mailed by the voter or delivered by the voter, in person, to the municipal clerk but instead could be dropped into a drop box and that the ballot drop boxes could be unstaffed, temporary, or permanent,” the right-wing lawsuit continues. “But a drop box is not the ‘municipal clerk.’ It is an unsupervised, inanimate object. Allowing ballots to be cast by placing them into an unsupervised, inanimate object invites the fraud and abuse.”

Senate Democrats, in their own filing, hotly contest the claims of fraud and abuse leveled by the plaintiffs–correctly noting that Wisconsin ran an extremely clean election in 2020 due, in part, to the use and volume of state-authorized ballot drop boxes.

From the Elias team’s motion to intervene:

2020 saw the highest turnout for Wisconsin voters in 70 years, with nearly 76% of eligible voters participating and making themselves heard. That turnout was facilitated by the widespread availability of carefully regulated secure drop boxes, in which voters can safely and securely deposit their voted ballots, confident that those ballots will reach elections officials in time to be counted. Many if not most of these secure drop boxes were staffed and carefully supervised by duly authorized representatives of Wisconsin’s municipal clerks. There is no evidence whatsoever that the use of secure drop boxes like these facilitated voter fraud. To the contrary, the evidence demonstrates that such secure drop boxes helped ensure that countless lawful voters were able to participate in the election, without having to bear the burden of long lines (a perennial problem in Wisconsin, particularly in the state’s denser population centers) or worry that the U.S. Postal Service would not deliver their ballot in time to be counted (a reality that, but for judicial intervention, would have invalidated approximately 80,000 lawful voters’ ballots in the 2020 spring primary).

“In the post-election [sic], several lawsuits were filed challenging drop box voting,” the filing goes on to note–obliquely referencing a flurry of similar and similarly unsuccessful lawsuits filed by the plaintiffs’ ideological fellow travelers. “All failed.”

The procedural posture of the Democratic Party lawsuit is that the DSCC should be allowed to join as defendants alongside the WEC in advance of the 2022 midterm elections.

“DSCC has a strong ‘cognizable interest’ in defending against this attack both to help ensure that voters are not impeded by this cynical effort when they attempt to vote in the 2022 U.S. Senate election, and because the invalidation of drop boxes would require DSCC to divert valuable resources to reeducation of voters who relied on drop boxes in 2020 and additional turnout efforts to counteract the detrimental effects that eliminating the availability of drop boxes would have,” the lawsuit goes on. “In an election, injuries to political committees caused by diversion of resources are particularly acute, because money that is not available in the cycle for voter persuasion is forever lost; once the election occurs, the window for persuasion and outreach has forever passed.”