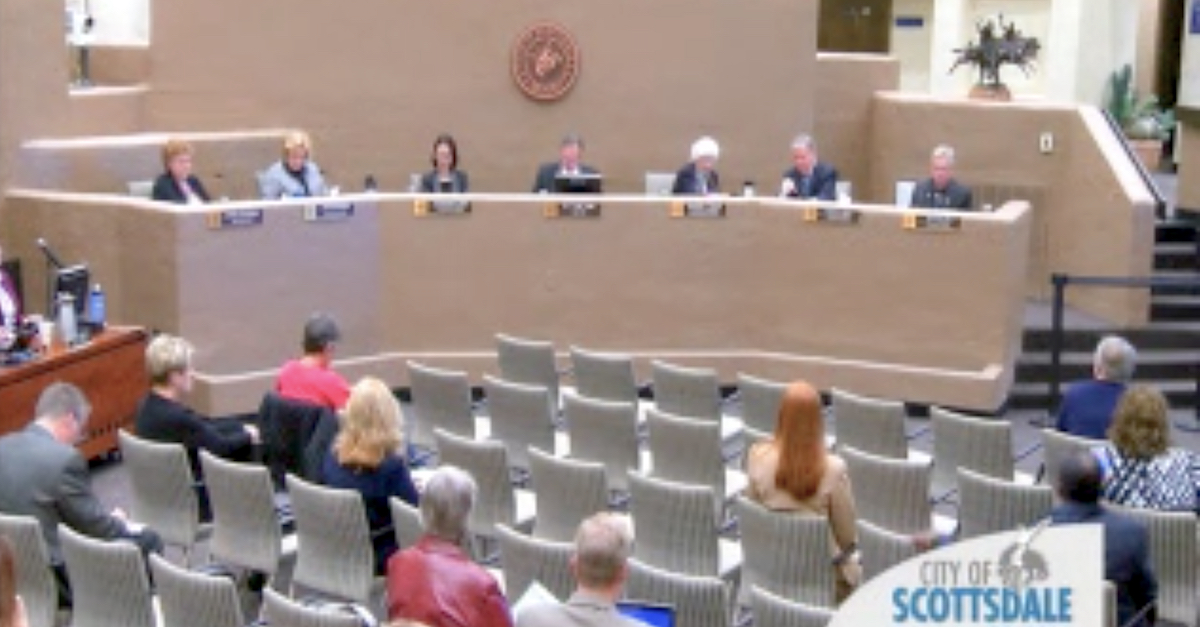 Protracted litigation between a self-professed “minority religion” known as The Satanic Temple and the City of Scottsdale, Ariz., reached oral arguments before the 9th Circuit Court of Appeals on Thursday.

The case, styled as Satanic Temple, Inc. v. City of Scottsdale, involves allegations that city officials unconstitutionally discriminated against the group when officials refused to allow adherents to offer an invocation before a standard city council meeting. The temple said the refusal amounted to a violation of the group’s rights under the anti-establishment clause and the equal protection clause of the First and Fourteenth Amendments.

The temple described itself as a “nontheistic religion with an international presence and a presence in all 50 states” with “membership . . . numbered in the hundreds of thousands.”

When the group sought to provide a typical “legislative prayer” to precede a standard city council meeting, backlash ensued.

Other groups had long been allowed to offer such prayers, court documents indicate; however, the temple says there was no formal policy and no selection process for vetting which groups would participate. The temple described the process as “an all-comer system” which “involved no investigation into the nature of the speaker or the contents of the prayer.”

The temple called to be scheduled as a participant; a clerk put the group on the calendar after a brief phone call. A scheduling conflict delayed the group’s participation.

Then, “a massive public outcry took place,” the temple says in appeals court papers. “For example, one church coordinated a 15,207 email assault in the span of a couple of hours. The subject of the form email was ‘No Hail Satan prayer.’ There were other emails, too, predominately conveying that the senders were upset that the invocation was scheduled. The volume of predominately negative feedback crashed City’s servers.”

The mayor responded negatively as well.

“The mayor finds this whole affair personally repugnant and does not condone this group, its belief [sic] or mission,” several reply emails issued by a clerk stated.

The mayor also issued a statement which said, “In Scottsdale we’ve decided to keep our traditional invocations and we’ve decided to send this Satanist sideshow elsewhere.” The message was titled “Standing Up To Satanists. Standing For Traditional Invocations.”

The scheduling clerk who initially okayed the temple’s participation finally responded with a no, on these grounds: “the City is not going to deviate from its long standing practice of having the invocation given only by representatives from institutions that have a substantial connection to the Scottsdale community.”

“Later, the Mayor bragged in reelection literature that he ‘Stopped so-called Satanists from mocking City Hall traditions with a prayer,’ the temple alleged.

Litigation ensued. The temple argued that the policy which required prayer groups to have a “substantial connection” to the city was mere pretext for discrimination.

“This is a case about legislative prayer, an institution in this country since the founding of our republic,” the city said. “Consistent with that long tradition, the City of Scottsdale . . . has maintained a legislative prayer practice for years whereby religious organizations with a substantial connection to the City have been invited to give a brief invocation on behalf of the City Council prior to City Council meetings. This appeal arises out of a Tucson resident’s request to deliver such an invocation despite not residing in, being a part of, or otherwise having a substantial connection to, the City. When that Tucson resident (Jeremy Zarzycki) was told ‘no,’ another Tucson resident (Michelle Shortt) and certain organizations she purported to represent sued, claiming religious discrimination.”

The city’s brief argued that the decision was made by a city manager who was blissfully ignorant of the entrenched debate:

The uncontroverted evidence adduced during a two-day bench trial foreclosed Appellants’ claims. Acting City Manager Brian Biesemeyer explained that he was solely responsible for making the decision about Appellants’ request to deliver an invocation. Mr. Biesemeyer testified that he did not know about the religious beliefs of the person or group requesting to give an invocation, that he did not care what those beliefs were, and that he was uninterested in what the City’s elected officials thought about that group. Instead, consistent with the City’s longstanding practice, Mr. Biesemeyer made the administrative decision to deny the invocation request because neither the individual nor the group had any discernable connection to the City. In its function as fact finder, the district court found Mr. Biesemeyer credible and his testimony unrefuted.

The city also sought to foreclose the chance that the case would go on to make law.

“If this Court were looking for a model appeal,” the city wrote, “this case is not it.”

The city’s arguments rested largely on the assertion that the temple raised its best arguments “for the first time on appeal” or otherwise “failed to timely raise” such arguments “before the district court, or both.” Such claims are generally legally fatal to an opposing argument: cases must be fully tried at the district court level before they are appealed.

The district court ruled in favor of the city, thus launching the case to the 9th Circuit.

Attorney Matthew A. Kezhaya pressed the core facts of the case repeatedly when questioned by a three-judge panel of appeals court judges Thursday. He called his client a “politically maligned minority.”

The panel asked several procedural questions about how far it could dig into facts of the case given the city’s argument that the temple failed to properly try the case before the lower district court.

The judges seemed collectively intent on the thought of ruling against the temple because the core constitutional issue of whether the city’s policy was indeed discriminatory had been waived during previous stages of the litigation.

“In no shortage of irony, they have waived the ability to challenge the waiver argument,” said attorney Scot Claus on behalf of the city.

He also argued that then-Acting City Manager Brian Biesemeyer was the one who dictated the policy which shut down the temple’s request — more or less in a vacuum.

Claus said that because the city manager independently acted, and because there was no evidence to suggest Biesemeyer acted with discriminatory event, the temple’s claim must fail.

“The mayor and the council individually and as a body made no decision in this case that impacted the rights or the ability of the plaintiffs to do a single thing,” Claus continued.

“You’ve made this point at length,” said Judge Christen.

“There’s a serious waiver problem here,” she added. “But this is an allegation that they were discriminated against. And, so maybe it’s fortunate that you don’t have to justify some of the other statements that were made by other folks who weren’t the decision makers . . . can you engage please in what he’s arguing vis-a-vis the evidence of pretext?”

Claus said the temple’s assertion that “everything changed” when elected politicians started balking about the matter was simply “not tethered to reality.”

The temple said the district court botched the case by looking at the city manager’s subjective intent rather than an objective examination of the entire constellation of statements by the city surrounding the temple’s request to participate.

“Facial neutrality is not determinative,” Kezhaya argued.  “That’s all they have going for them.  They did something that was facially neutral, but when you peer behind it,” there was discrimination.

Judge Murguia suggested that some of the cases Kezhaya cited may not even apply to this type of case.

The judges seemed inclined to follow the city’s reasoning, but such impressions are sometimes deceiving.

Watch the arguments below via the 9th Circuit’s video feed: