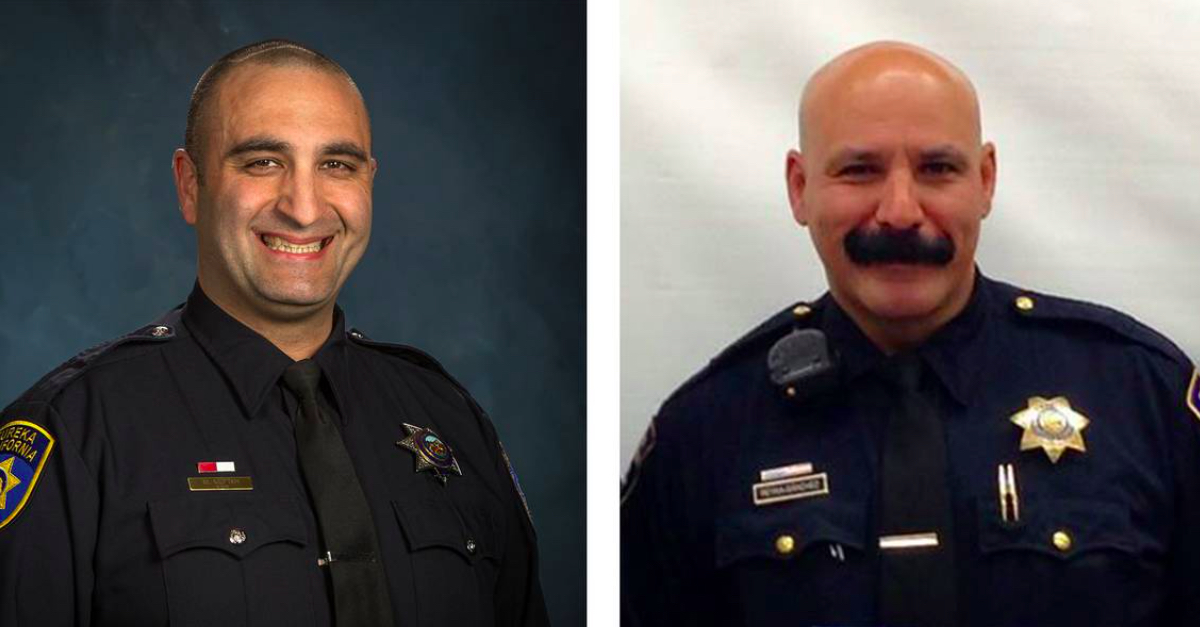 Two police officers in Northern California were suspended on Wednesday evening pending an investigation into a series of violent, demeaning, and sexually explicit text messages sent in a group chat with other officers last year. The messages included discussions of shooting a recently freed prisoner and of beating protesters.

The graphic messages were first obtained and reported on by the Sacramento Bee on Wednesday afternoon. In response to inquiries from the newspaper, the Eureka Police Department announced that two of the officers who most frequently contributed to the discussion — Sgt. Rodrigo Reyna-Sanchez and Ofcr. Mark Meftah — were being put on paid leave “effective immediately.”

According to the report, Sgt. Reyna-Sanchez texted the group in April 2020 about a suspect who had been arrested with numerous guns and body armor once in the possession — ironically — of Reyna-Sanchez himself. After learning that the suspect been released from jail on bond, the sergeant wrote: “He also had one of my tac vests that I had loaned to code enforcement!! Face shoot the fucker!!!” the sergeant wrote. “He was one of my first arrests!!! Sent him to prison for a minute!!”

The Bee also noted that Reyna-Sanchez actually did shoot a suspect in the head in 2010 in an incident that was later deemed to be a justified use of force.

A month later, Meftah wrote to the group: “I’m disappointed that none of you assholes seemed interested in the hot trog sex I got to interrupt in the greenbelt . . .  I thought an animal was getting killed by a mountain lion or something from all the screaming.”

When another officer responded by saying there were “certain things that just don’t need to be pictured,” Meftah wrote: “Hey sex is sex, you put that shit on front of me ima watch . . . [a]nd I did, for like 10 minutes.”

The group was also particularly combative towards protesters.

In another message, Reyna-Sanchez said to Meftah, “Get pics of her rack!!” He was referring to, as the report put it, “a woman who was known to shoplift and who also had a history of mental illness.”

A screenshot of another message showed Reyna-Sanchez saying, “She sounds hot!!! In this cold chill, I bet she got some hard nipples!!!” It’s unclear from the story if he was referring to the same woman.

Eureka Police Chief Steve Watson on Wednesday released a lengthy statement which said he was “deeply saddened and disturbed” to learn of the messages being shared amongst his officers.

“Today, I feel compelled to state the obvious. The attitudes reflected in the text messages that were shared with us yesterday, do not mirror this training. They do not demonstrate the positive changes we have worked so hard to reach and they do not meet my personal performance expectations for this department,” Watson wrote on the department’s Facebook page. “While we leave room for the investigation to reveal more information, we also fully denounce the content of the communications that have been reported. And, we respectfully ask you to join us in doing the same. This is, in my opinion, the only right way forward.”