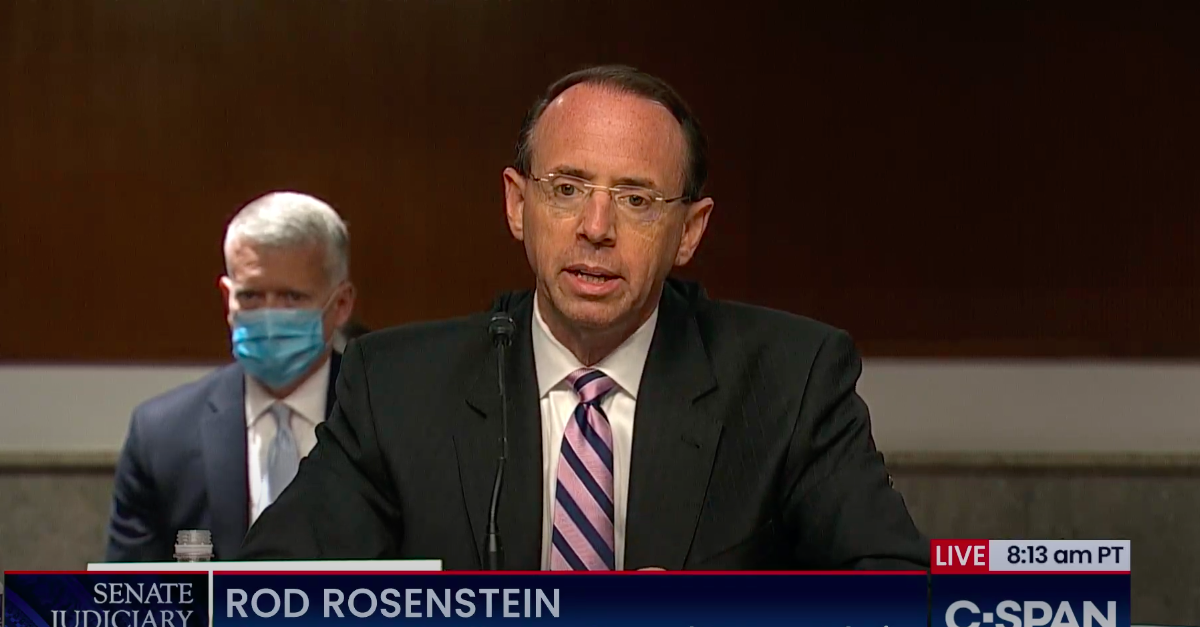 Former Deputy Attorney General Rod Rosenstein on Wednesday defended his decision to appoint Robert Mueller and defended the integrity of former Attorney General Jeff Sessions while deriding the failures of the FBI during testimony before the Senate Judiciary Committee.

Rosenstein, who was asked to appear before the panel in connection with its investigation into the FBI’s “Crossfire Hurricane” probe of the Trump campaign’s contacts with Russian government officials, said that Sessions had “complied with a legal obligation to recuse himself from that investigation,” due to his conflicts of interest with the Trump campaign.

“As a result of events that followed the departure of the FBI Director, I was concerned that the public would not have confidence in the investigation and that the acting FBI Director was not the right person to lead it,” Rosenstein said in his opening statement. “I decided that appointing a Special Counsel was the best way to complete the investigation appropriately and promote public confidence in its conclusions. As we now know, the eventual conclusions were that Russians committed crimes seeking to influence the election and Americans did not conspire with them.”

While he defended the need for an investigation, Rosenstein also went on to chastise the FBI’s handling of the ensuing investigation, specifically taking aim at the bureau’s procedural failures relating to FISA applications.

“Every application that I approved appeared to be justified based on the facts it alleged, and the FBI was supposed to be following protocols to ensure that every fact was verified. But investigative reviews published by the Inspector General [Michael Horowitz] in December 2019 and March 2020 revealed that the FBI was not following the written protocols, and that ‘significant errors’ appeared in applications filed in connection with the Crossfire Hurricane investigation,” Rosenstein said. “Senators, whenever agents or prosecutors make serious mistakes or engage in misconduct, the Department of Justice must take remedial action. And if existing policies fall short, those policies need to be changed. Ensuring the integrity of governmental processes is essential to public confidence in the rule of law.”