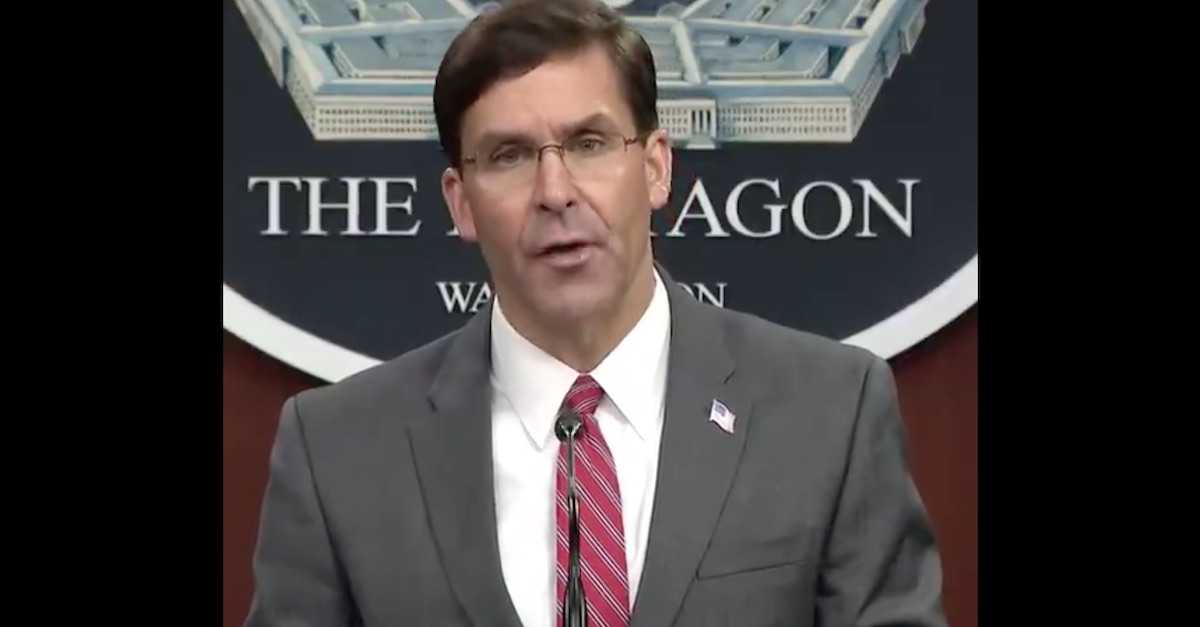 The Secretary of Defense Mark Esper on Wednesday publicly stated his opposition to the use of the Insurrection Act of 1807, which President Donald Trump threatened but didn’t officially invoke two days ago during a Rose Garden speech.

Defense Sec. Esper: "I do not support invoking the Insurrection Act."

"The option to use active-duty forces in a law enforcement role should only be used as a matter of last resort and only in the most urgent and dire of situations. We are not in one of those situations now." pic.twitter.com/XOOaH9ltye

“Active duty forces in a law enforcement role should only be used as a matter of last resort and only in the most urgent and dire of situations. We are not in one of those situations now. I do not support invoking the Insurrection Act,” Esper said on Wednesday during a Pentagon briefing in which he also expressed regret for using the word “battlespace” to describe the streets of American cities.

“It’s part of our military lexicon that I grew up with […] it’s not a phrase focused on people,” Esper explained. “In retrospect I would have used different wording.”

“I think the sooner that you mass and dominate the battlespace, the quicker this dissipates and we can get back to the right normal,” Esper said on Monday during a call with governors.

President Trump threatened to invoke the Insurrection Act in order to quell unrest, violence and “lawlessness” in the wake of the police killing of George Floyd.

“First, we are ending the riots and lawlessness that has spread throughout our country. We will end it now. Today, I have strongly recommended to every governor to deploy the National Guard in sufficient numbers that we dominate the streets. Mayors and governors must establish an overwhelming law enforcement presence until the violence has been quelled,” Trump said. “If a city or a state refuses to take the actions that are necessary to defend the life and property of their residents, then I will deploy the United States military and quickly solve the problem for them.”

“I am also taking swift and decisive action to protect our great capital, Washington, D.C.  What happened in this city last night was a total disgrace,” he added. “As we speak, I am dispatching thousands and thousands of heavily armed soldiers, military personnel, and law enforcement officers to stop the rioting, looting, vandalism, assaults, and the wanton destruction of property.”

10 U.S.C. § 254 states that “Whenever the President considers it necessary to use the militia or the armed forces under this chapter, he shall, by proclamation, immediately order the insurgents to disperse and retire peaceably to their abodes within a limited time” (emphasis ours).

Some panned Esper’s Wednesday remarks, but others said they would “take what we can get here.”

I’m willing to give him some credit here. He’s taken a significant position. And yes, maybe it’s late, and yes he could resign, but let’s take what we can get here. https://t.co/4SKwZnkmQB

At least one reporter is saying that that Esper’s opposition to invoking the Insurrection Act “did NOT go over well at the White House.”

NEWS: Esper's decision to state publicly that he does not support invoking Insurrection Act did NOT go over well at White House. Trump and some top aides viewed the Pentagon chief’s remarks on that at his news conference as out of line, aides told me, @MarioDParker @josh_wingrove