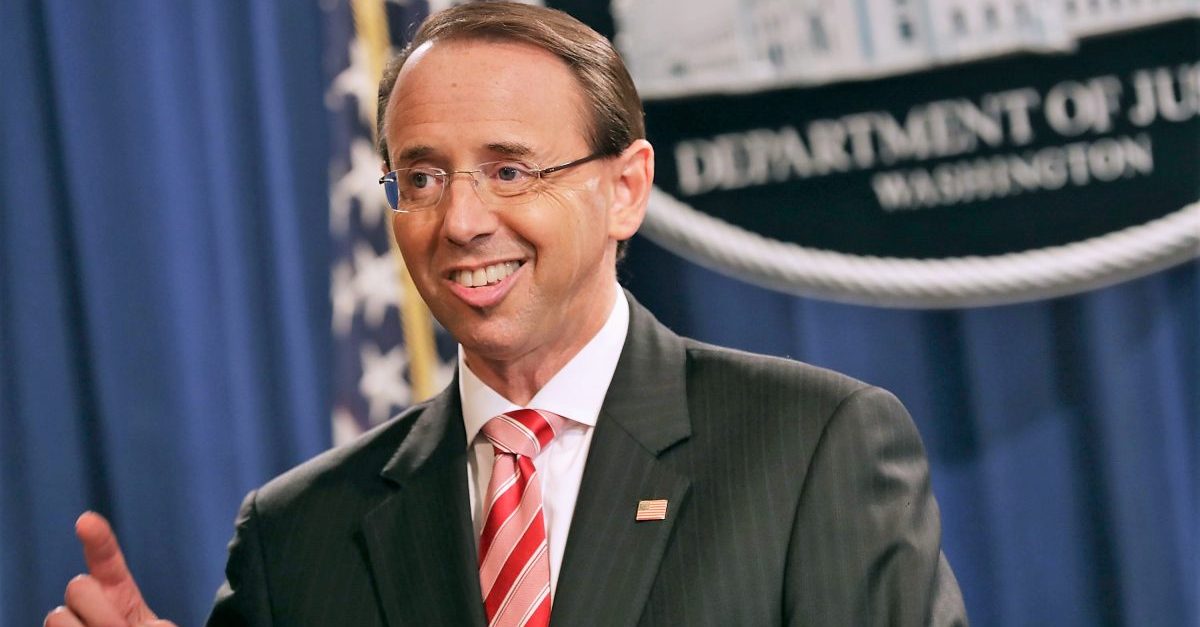 Former Deputy Attorney General of the United States Rod Rosenstein, from his official Twitter account on Thursday, decided to play one of his greatest hits, sharing a letter he sent to Sen. Chuck Grassley (R-Iowa) in June 2018 that emphasized the importance of “follow[ing established policies and procedures.” The DOJ’s Office of Inspector General (OIG) just so happened on Thursday to criticize former FBI Director James Comey for failing to do so.

If you had any doubts about what Rosenstein might have been talking about — after all, it’s not like he @-ed Comey — Rosenstein’s tweet highlighted an excerpt from the letter. That excerpt pretty clearly answered many of the justifications made by those defending Comey’s actions.

“It is important .. to follow established policies and procedures, especially when the stakes are high…. We should be most on guard when we believe that our own uncomfortable .. circumstances justify ignoring .. principles respected by our predecessors.” https://t.co/rJNZ0Hr20k

“It is important .. to follow established policies and procedures, especially when the stakes are high…. We should be most on guard when we believe that our own uncomfortable .. circumstances justify ignoring .. principles respected by our predecessors,” that excerpt said.

Although the OIG said Comey violated his FBI employment agreement, and Department of Justice and FBI policy through the “retention, handling, and dissemination of certain Memos” of his meetings with President Donald Trump, many speaking in Comey’s defense suggested that extraordinary times called for extraordinary actions.

Rosenstein’s tweet did the opposite, instead saying that “high stakes” and “our own uncomfortable circumstances” are no excuse for flying in the face of timeless principle.

The OIG concluded that Comey “failed to live up” to the responsibility of law enforcement to protect sensitive information and mentioned that Comey was “previously faulted[…] for acting unilaterally and inconsistent with Department policy.” That wasn’t all: the OIG shamed Comey for setting a “dangerous example” by seeking to “achieve a personally desired outcome.”

Comey’s unauthorized disclosure of sensitive law enforcement information about the Flynn investigation merits similar criticism. In a country built on the rule of law, it is of utmost importance that all FBI employees adhere to Department and FBI policies, particularly when confronted by what appear to be extraordinary circumstances or compelling personal convictions. Comey had several other lawful options available to him to advocate for the appointment of a Special Counsel, which he told us was his goal in making the disclosure. What was not permitted was the unauthorized disclosure of sensitive investigative information, obtained during the course of FBI employment, in order to achieve a personally desired outcome.

This certainly wasn’t the first time Rosenstein had some words for Comey.

Rosenstein’s tweet was not received well by CNN legal analyst and former federal prosecutor Renato Mariotti, who accused Rosenstein of standing idly by while Attorney General William Barr “misled the public about Trump.” Rosenstein quote-tweeted Mariotti and said: “Notice how this pundit completely misses the point and thereby illustrates it.”

Notice how this pundit completely misses the point and thereby illustrates it. https://t.co/wOQKVaCzC6

Editor’s note: this story was updated after publication with information about the Rosenstein-Mariotti Twitter confrontation.