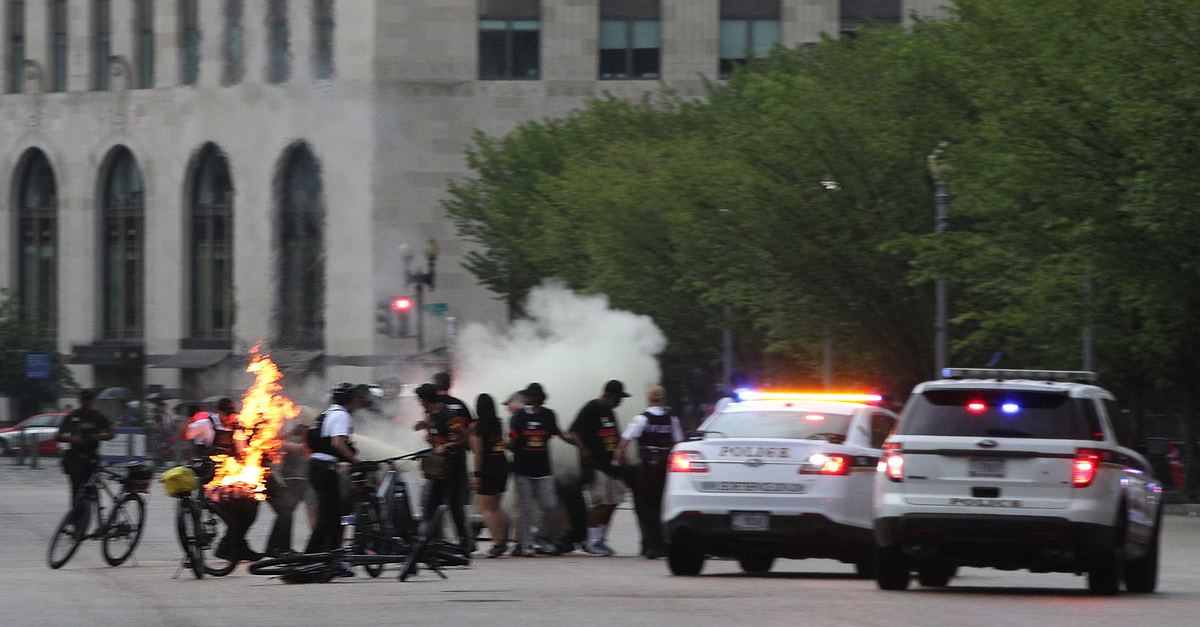 The charges were never likely to stick anyway.

On late Monday, prosecutors in the District of Columbia dismissed two misdemeanor counts of inciting violence and disorderly conduct filed against First Amendment and Revolutionary Communist Party activist Gregory “Joey” Johnson after he burned a flag in front of the White House on July 4, 2019. If his name seems familiar, that’s because he won the landmark Supreme Court case Texas v. Johnson.

As Law&Crime previously reported, authorities initially charged Johnson, a 62-year-old resident of San Francisco, California, with a separate felony count of assaulting police after officers complained they had been sprinkled with lighter fluid from the burned flag in question. That charge would not be pursued.

In 1984, Johnson was arrested for burning the American flag during the Republican National Convention in protest of the Reagan Administration’s bloody record in Latin America–as well as the Democratic Party’s embrace of violent anti-communism abroad. The protest, performed just outside of Dallas City Hall, was peaceful and no one was injured during the kerosene-fueled theater.

Johnson’s case eventually went all the way up to the Supreme Court–which ruled in his favor. A 5-4 majority opinion found that Johnson’s treatment was in violation of the First Amendment. That decision immediately invalidated anti-flag desecration laws on the books in 48 states.

In response to Johnson’s victory on freedom of speech grounds, the largely upset U.S. Congress passed the Flag Protection Act of 1989 by supermajorities in both the House and Senate. President George H.W. Bush allowed the bill to pass into law without his signature and burning the American flag was then a federal crime.

But not for long.

This second flag burning prompted an immediate arrest of the latter three activists (Johnson accused D.C. police of “cowardice” and said he was “outraged” that he wasn’t arrested with his friends) and ultimately turned the four men into modern punk rock folk heroes–as their flag-burning chant became the oft-repeated refrain in former Dead Kennedys’ singer Jello Biafra‘s spoken word hit “The Pledge of Defiance.”

The resulting court case, stylized as United States v. Eichman, also made its way to the Supreme Court and again ended with the anti-flag burning statute being tossed for its violation of the First Amendment with the ideologically disparate majority noting that attempts to ban flag burning are “related to the suppression of free expression and concerned with the content of such expression.”

In June of 2016, with the law finally and firmly on his side, Johnson publicly burned the American flag during the Republican National Convention once again. After an arrest on ambiguous grounds by local police, the City of Cleveland agreed to pay Johnson $225,000 for violating his First Amendment rights.

Last week, the American Civil Liberties Union sent a strongly-worded letter to D.C. Attorney General Karl A. Racine, urging his office to drop the charges against Johnson–and counseling that there was essentially no possibility of securing a conviction against the  activist.

In a brief statement, Racine’s office acknowledged the futility of the prosecution, saying they had “evaluated all the evidence, including evidence that was not available at the time the original charging decision was made, and determined that it is appropriate to dismiss the charges against Mr. Johnson.”