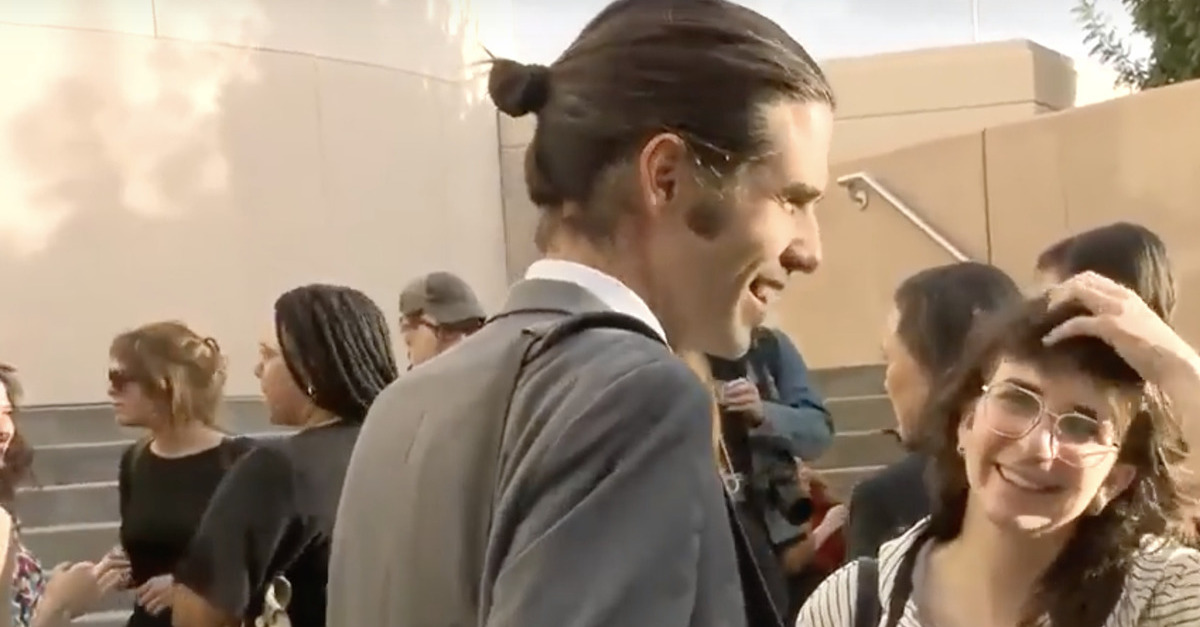 The Trump administration’s harsh policies on illegal immigration aren’t aimed solely at border-crossers themselves. Since Donald Trump has taken office, federal prosecutions of aid workers and others who assist migrants along the U.S.-Mexico border have increased. One such humanitarian worker is Scott Warren, who had been volunteering with aid group “No More Deaths” to provide food and water to migrants crossing the Sonoran Desert.

Warren was arrested for giving food, shelter, and first aid to two migrants from Central America. Border Patrol agents claimed Warren had been helping the migrants evade capture, and Warrant was charged with two counts of harboring undocumented immigrants and one count of conspiracy to harbor and transport. He faced up to 20 years in prison if convicted.

Warren’s first trial ended with a hung jury, but at his second trial, prosecutors sought to minimize potentially inflammatory mention of Trump and the president’s immigration policies. Prosecutors argued in a pretrial motion that Warren should be prohibited from mentioning the president or his policies. Greg Kuykendall, Warren’s defense lawyer, argued that Trump was responsible for the prosecution of his client, and contended the Republican president should be mentioned “as frequently and repeatedly as anyone wants.”

Ultimately, the prosecution’s request was granted by U.S. District Court Judge Raner Collins, who said “there should be no politics in this case.” Trump or no Trump, though, the jury wasn’t buying the prosecution’s story of Warren-as-felon. The 16-member jury acquitted Warren after just over two hours of deliberation.

In addition to the charges on which the jury deliberated, Warren faced two charges that were handled directly by Judge Collins. One was “littering” for leaving food and water for travelers. That charge was dismissed on the grounds that Warren had been exercising his religious beliefs. The other charge was illegal operation of a motor vehicle in a wilderness area in connection with the No More Deaths aid drop. Judge Collins found Warren guilty of that charge. For that, Warren could face probation or up to six months behind bars; sentencing is set for Feb. 18.

Outside the courthouse, Warren told the crowd that the “government failed in its attempt to criminalize basic human kindness.”

Michael Bailey, U.S. attorney for Arizona, said the verdict isn’t likely to change how his office handles similar cases in which individuals like Warren act out of a “misguided sense of social justice.” Bailey told reporters that he was “disappointed in the verdict,” but that, “it won’t deter us from continuing to prosecute all the entry and re-entry cases we have, as well as all the harboring and smuggling and trafficking cases that we have.”

No More Deaths reacted to the verdict by tweeting, “This verdict is validation of what we have always known: that #humanitarianaidisneveracrime We will continue to provide food, water, and medical aid to all those who need it, until the day that no one dies or disappears while crossing the deserts and oceans of the world.”

This verdict is validation of what we have always known: that #humanitarianaidisneveracrime

We will continue to provide food, water, and medical aid to all those who need it, until the day that no one dies or disappears while crossing the deserts and oceans of the world.