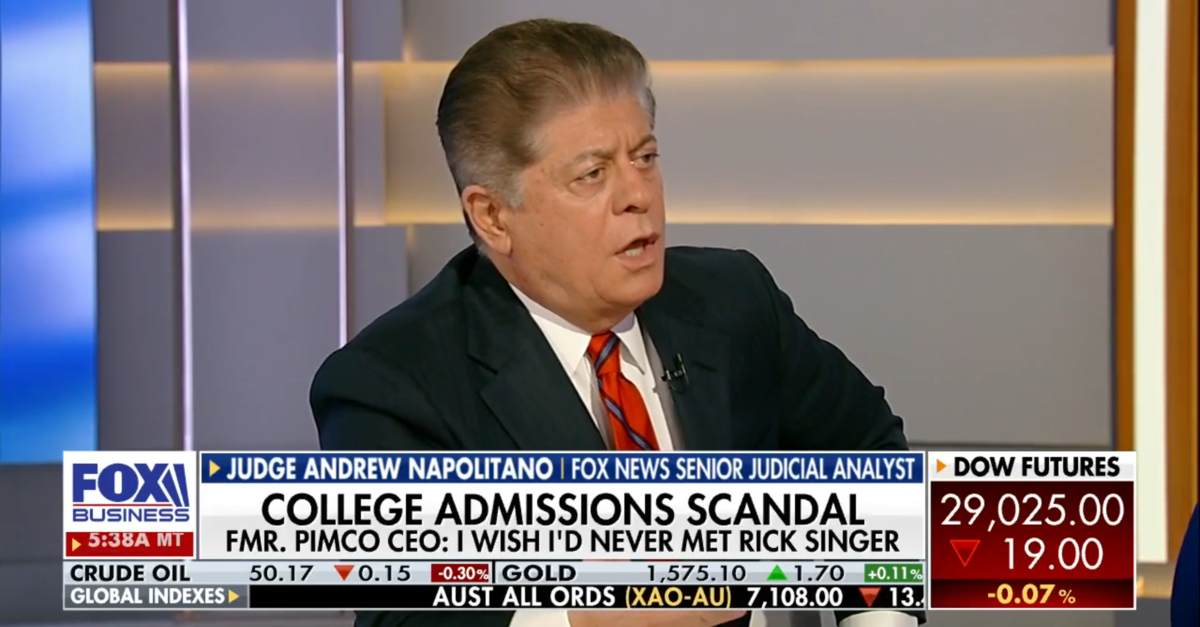 Fox News judicial analyst Andrew Napolitano had some harsh words for a federal judge involved in the ongoing college admissions scandal on Monday.

The focal point of the segment on Fox Business was the decidedly harsh 9-month sentence meted out to former Pimco CEO Douglas Hodge after he admitted to purchasing his four children’s ways into their spots at two elite colleges–the University of Southern California and Georgetown University in the District of Columbia.

“I think this is an absurd sentence,” Napolitano began, “a gross overreaction on the part of the judge. For some reason–and I don’t know why–this is not the judge who has sentenced everybody else in these cases.”

U.S. District Judge Nathaniel M. Gorton called Hodge “a common thief” after the wealthy man performed a tearful allocution before the hardline sentencer. (It’s not the first time this judge has called one of these defendants a “thief“.)

“I have in my heart the deepest remorse for my actions,” Hodge said. “I do not believe that ego or desire for high social standing drove my decision-making. Rather, I was driven by my own transformative educational experiences and my deep parental love.”

Gorton, who has not determined most punishments so far, didn’t seem to appreciate that much at all—and handed down the longest sentence yet in the case.

Spurned on by Gorton’s lack of empathy, the firebrand analyst offered his own critical theory of the case:

I’ve been arguing for a long time that this is not a crime–no one was harmed. A study was done to see if anyone was bumped from the admissions because these students got in because the parents did the bribing, and nobody was because there’s an elasticity in the admission classes in these schools. I think this is a gross overreaching on the part of the prosecutors and a misguided sentence.

A guest on the show made the case that Napolitano couldn’t “quantify” the damage because no one was “bumped” due to the parents of the privileged children in question–arguing that the reason for seeking criminal punishment was “about setting an example [and] to stop other rich parents” from purchasing college admission for their children.

The former judge was undeterred:

I mean, this, if anything, is a civil wrong. It’s a tort. And [the parents] ought to have been sued if anyone was harmed. The government itself did the study, because it wanted to argue–when the defense lawyers raised the argument that there’s no harm–the government wanted to argue, “Kids who didn’t get in were harmed,” and then the government did its own study and decided, “Well, nobody was really harmed,” is the government in the business of setting an example of how people should behave? What’s the difference between this and somebody who gives $10 million to NYU to get the kind into the law school there?

Napolitano half-joked: “I just picked on NYU because you’re on the board–I’m not critical of NYU.”

“Well, wait a second,” Bartiromo said repeatedly. “Wait a second. The difference is they lied on the application and said ‘My kid is on the track team,’ and ‘My kid is an expert,’ whatever, to get them in.”

“Is that the business of the federal government?” Napolitano asked. “That’s why I said it’s a civil wrong. It’s a tort.”

“I just don’t see how that is a federal criminal charge,” Napolitano continued.

“There’s only a certain limited amount of spots that kids can get in,” Bartiromo replied.

“The government was unable to make that argument,” Napolitano reiterated, “because of the elasticity in the admission classes.”

Napolitano then cautioned that he didn’t think everything that occurred was on the up-and-up.

“This is not appropriate behavior,” he said, “but I don’t think it’s a crime under the Constitution.”

Another guest offered that the federal government was interested in the Varsity Blues scandal largely because the colleges at the center of the controversy all receive federal funds.

To which Napolitano offered his trademark libertarian critique: