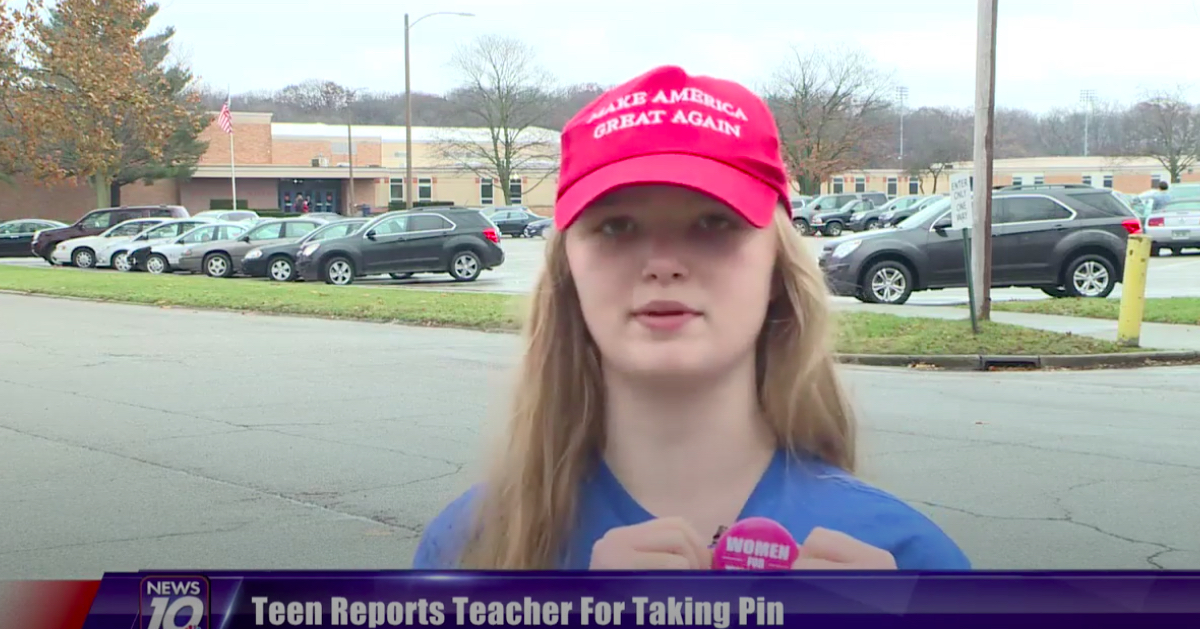 A Michigan high school student’s mom filed assault and larceny police report against a teacher after her daughter said he ripped a “Women for Trump” pin off of her shirt.

Mason High School junior Sadie Earegood, 16, said the Dec. 5 incident began when her media technology teacher Paul Kato said he didn’t like the pin, but quickly escalated when the educator put his hands on her to remove the pin.

“I was just really shocked that a teacher would especially do that,” Earegood told WILX on Tuesday. “He’s talking about the ‘Women for Trump’ pin and I said, ‘that’s fine you don’t have to like it, we can have our opinions.'”

According to Earegood, Kato then grabbed her and pulled the pin off of her shirt before placing it on his own shirt upside-down.

“He grabbed it and I pulled, I tried to push his hand away and he grabbed my shoulder – just kind of put his hand there – and then he started pulling more and more and I just started backing up,” Earegood said. “I just want him to know that it’s not OK to do that.”

Earegood’s mother said she filed a police report on behalf of her daughter following the incident.

“I made a criminal assault and larceny report against the teacher,” said Capi Earegood.. “He had no right to put his hands on my child over a pin or anything else. The first amendment gives everyone the right to express their freedom of speech. No one should get that upset about someone wearing a political pin.”

Mason Police Chief Don Hanson told WILX that his department is currently looking into reports of an alleged Dec. 5 assault.

Kato, originally from Nigeria, helped build a residential soccer school. He has reportedly not been seen on campus since the incident.

In the wake of the incident, students defended Kato, claiming this is being blown out of proportion.

“[Earegood’s] perspective must have been totally different than what Kato’s perspective was, but from witnesses around it seemed as a jokingly matter,” senior Ina Aker said.

“Everyone is just outraged. That’s just the best way I can put it. Everyone is just upset because they feel like there’s more to the story than what’s being said,” Kato’s former student Alexa Martin said.

Kato has lawyered up, and an investigation is ongoing.