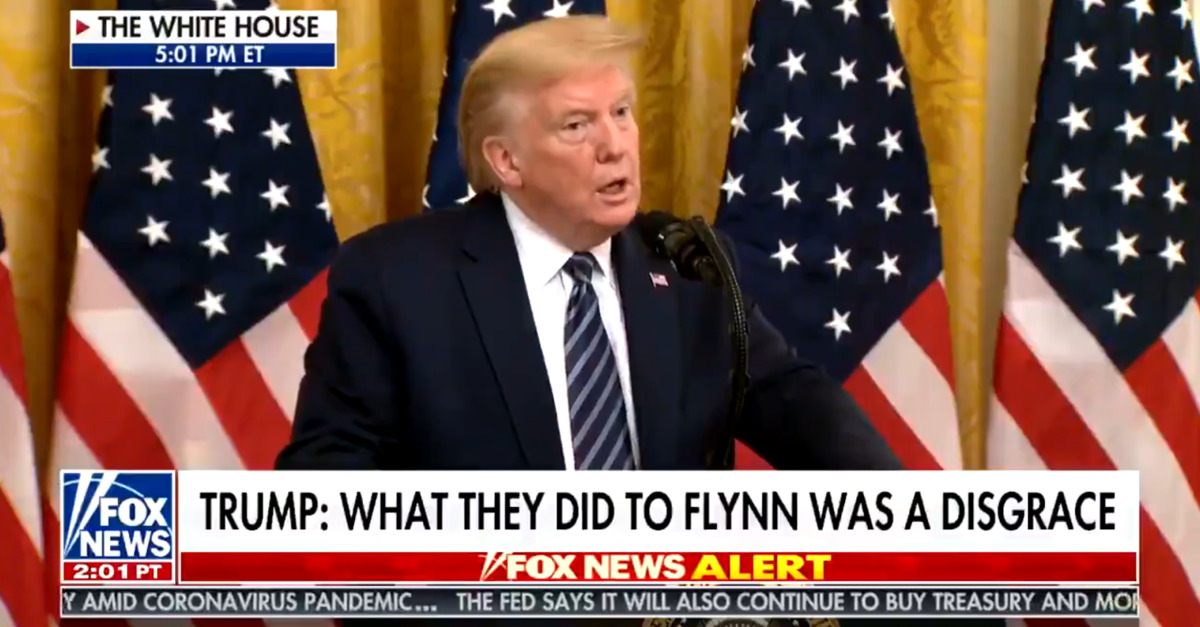 President Donald Trump famously fired his first national security advisor Michael Flynn for allegedly lying to Vice President Mike Pence. Late Thursday afternoon, however, Pence said he doesn’t think Flynn lied to him at all. Trump quickly followed up Pence’s revisionist history by saying that he would be open to re-hiring Flynn.

“I’m inclined, more than ever, to believe that what he communicated to me back during the transition leading to our inauguration–that was unintentional and not–and that he was not attempting to misrepresent facts,” Pence said during a press conference.

Flashback to that early December 2017 firing:

Trumpworld erupted late Wednesday after documents were released by a federal judge which confirmed that the investigation into Flynn led by the Federal Bureau of Investigation (FBI) was marked with dissension among the ranks about how to proceed with the former lieutenant general’s case–or whether to proceed at all.

“What is our goal?” asked, Bill Priestap, then-assistant director of the FBI Counterintelligence Division about the Flynn inquiry in one of those internal bureau documents. “Truth/Admission or to get him to lie so we can prosecute him or get him fired?”

Outrage among conservative media outlets ensued as it appeared the FBI had effectively worked to have Flynn entrapped.

Several attorneys told Law&Crime, however, that the FBI’s methods might look “unseemly” but were largely in keeping with the precedents allowed by federal courts over the past 50 years as the federal bench has steadily increased the power of police at the expense of overall civil liberties.

Suffice to say, many saw these explanations as decidedly cynical and exasperated shrugging that entrapment is basically business as usual.

“So according to experts on MSNBC and other networks this is all just standard procedure in discussing how to trap a high ranking incoming officer under a clearly unconstitutional law,” mused criminal defense lawyer and George Washington University law professor Jonathan Turley in understated echoing of the day’s outrage. “Experts are just shrugging off this with ‘everyone does it.'”

That outrage quickly boiled over to Trump himself and to his own vice president.

“Regarding General Flynn,” another reporter asked at Pence’s Thursday press conference. “We were led to believe, the American public was led to believe, that he lost his position back in February of 2017 because he lied to you. And what you’ve just said is you believe that maybe what he said was not a complete lie. Do you believe he was fired appropriately? Should he not have been fired? Or is it just all having this sort of 2020 hindsight?”

“Well, I know what General Flynn told me and I’m more inclined to believe that it was unintentional than ever before,” Pence replied. “And when you see the nature of abusive actions by Justice Department officials toward him, it’s deeply troubling to me.”

“I know what he told me,” Pence went on. “But I’m actually more inclined than ever to believe that he unintentionally omitted facts when we had our conversation in January 2017.”

Trump himself had been supportive of Flynn throughout the day–sharing articles by the conservative Daily Caller and other ideologically situated outlets about the latest Flynn dustup.

“What happened to General Michael Flynn, a war hero, should never be allowed to happen to a citizen of the United States again!” the 45th president tweeted early Thursday morning after it came to light that the FBI had recommended closing their investigation into Flynn just weeks before his interview with investigators.

It was later reported that those disclosures revealed the FBI kept their file on Flynn open due, at least in part, to the immediate intervention of disgraced former FBI agent Peter Strzok.

That rolling spate of disclosures led to multiple criticisms leveled against investigators throughout the day by elected officials including Sen. Chuck Grassley (R-Iowa) and Rep. Jim Jordan (R-Ohio).

Trump was eventually asked directly if he might consider rehiring Flynn–who previously pleaded guilty to lying to federal investigators–and bring him back into the White House.

“Well, I think he’s a fine man,” he said. “I think it’s terrible what they did to him. It’s something that nobody’s asked me. But you’re asking me for the first time. I would certainly consider it. Yeah, I would.”

“I think he’s a fine man,” the 45th president continued. “I think he’s got a great family. He loves his son. I will tell you, his son was around a lot. And he loves his son as people generally do. And they did everything possible to destroy him and he’s still breathing strongly. But they really hurt him very badly. Very very unfair.”