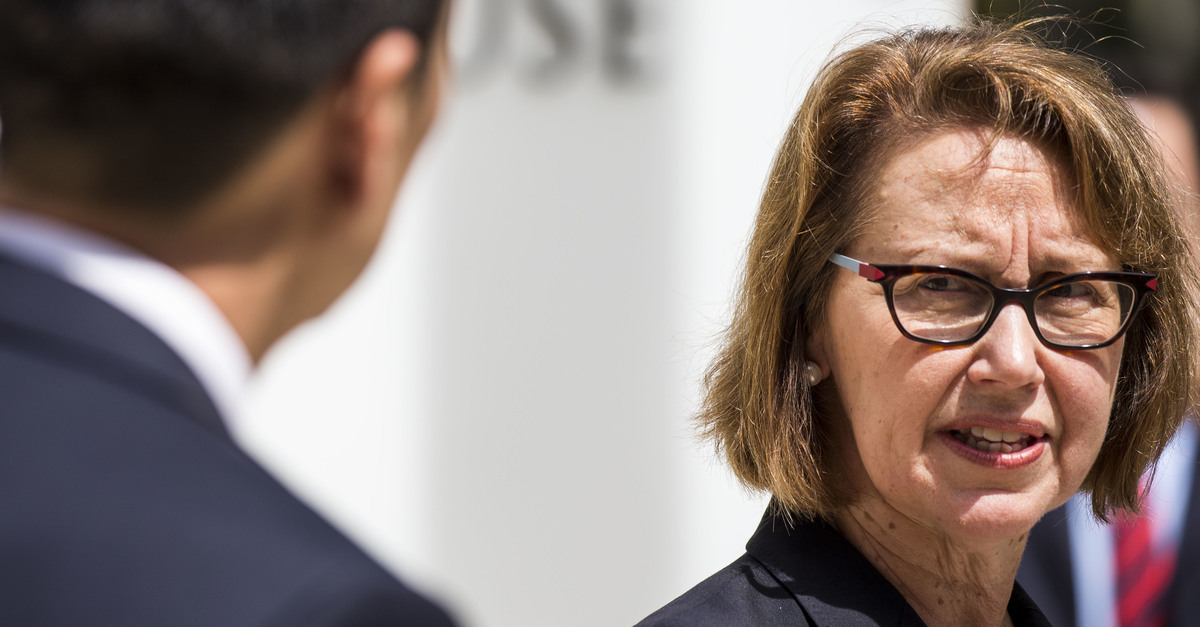 The lawsuit alleges that agents under the control of Acting DHS Secretary Chad Wolf “have engaged in unlawful law enforcement in violation of the civil rights of Oregonians by seizing and detaining them without probable cause.” Rosenblum also announced she was launching a criminal investigation of Wolf and his subordinates.

READ the lawsuit documents below.

The practice appears to be localized to the City of Portland for now and had been documented on social media for days before Oregon Public Broadcasting broke a story on Thursday afternoon confirming that men in camouflage have been rushing up to people on the street, failing to identify themselves or their agency or department, hastily detaining protesters or assumed protesters without a word, and then driving off with the detainees in captivity.

These federal officers (?) just rushed up and arrested someone for no reason pic.twitter.com/xcFVuoMZmN

Gestapo crackdown underway in Portland. This is not a drill. #FascistAlert pic.twitter.com/iHZkvTh1bH

“I share the concerns of our state and local leaders–and our Oregon U.S. Senators and certain Congressional representatives–that the current escalation of fear and violence in downtown Portland is being driven by federal law enforcement tactics that are entirely unnecessary and out of character with the Oregon way,” Rosenblum said in a statement announcing the litigation. “These tactics must stop. They not only make it impossible for people to assert their First Amendment rights to protest peacefully. They also create a more volatile situation on our streets.”

Tonight we will file a lawsuit in federal court against U.S. Department of Homeland Security, U.S. Marshals Service, U.S. Customs and Border Protection, and the Federal Protection Service alleging they seized and detained Oregonians without probable cause.

The attorney general said she will immediately follow the lawsuit with a motion for a temporary restraining order (TRO) “regarding the forcible detainment” of Oregon resident Mark Pettibone, a protester who said he was plucked off the street before being held at the federal courthouse in Portland and eventually released.

“I am basically tossed into the van,” Pettibone told Oregon Public Broadcasting. “And I had my beanie pulled over my face so I couldn’t see and they held my hands over my head.”

Rosenblum said the lawsuit was specifically being filed in response to “federal authorities overstepping their powers and injuring or threatening peaceful protesters” this past week.

The first of these took place on July 12, 2020, when a peaceful protester was standing near the Mark O. Hatfield United States Courthouse. The protester was hit in the head with an “impact weapon” and suffered severe injuries. The second occurred July 16, 2020, also in downtown Portland, when an unmarked minivan with undercover federal agents wearing generic green military fatigues forcibly detained Pettibone, who was walking on a sidewalk.

“We are today asking the federal court to stop the federal police from secretly stopping and forcibly grabbing Oregonians off our streets, and we are announcing a state criminal investigation, with the Multnomah County District Attorney, into the incident resulting in serious injuries to a peaceful protester–apparently committed by a federal police officer in downtown Portland last week,” Rosenblum’s statement continued.

“The federal administration has chosen Portland to use their scare tactics to stop our residents from protesting police brutality and from supporting the Black Lives Matter movement. Every American should be repulsed when they see this happening. If this can happen here in Portland, it can happen anywhere.”

The U.S. Marshals Service denied being involved with the arrests, Law&Crime previously reported.  Department of Homeland Security Acting Secretary Chad Wolf defended his officers in a series of tweets Friday.

“Let’s get this right. ‘Protestors’ imply they were peacefully exercising their 1st amendment rights,” Wolf tweeted. “Instead, DHS officers were assaulted with lasers and frozen water bottles from violent criminals attempting to tear down federal property. 2 officers were injured. Facts matter.”

Let’s get this right. “Protestors” imply they were peacefully exercising their 1st amendment rights. Instead, DHS officers were assaulted with lasers and frozen water bottles from violent criminals attempting to tear down federal property. 2 officers were injured. Facts matter. https://t.co/U2CdAT0c9G

Earlier, Wolf praised the actions of his own officers.

Our men and women in uniform are patriots. We will never surrender to violent extremists on my watch. pic.twitter.com/kG8w8kyw9E

These valiant men and women have defended our institutions of justice against violent anarchists for 48 straight days. We will prevail. pic.twitter.com/Qo9XoCyH2N

“I offered @DHSgov support to help locally address the situation that’s going on in Portland, and their only response was: please pack up and go home. That’s just not going to happen on my watch.” pic.twitter.com/BW8UdbNZ9c