Yesterday was Tuesday and a Department of Justice lawyer confirmed in an email the “decision has been made to print the 2020 Decennial Census questionnaire without a citizenship question,” adding that the printer has been “instructed to begin the printing process.” Commerce Secretary Wilbur Ross also made a statement (“The Census Bureau has started the process of printing the decennial questionnaires without the question”) confirming that. Today is Wednesday and President Donald Trump called that news “FAKE,” sparking serious confusion among federal judges and DOJ lawyers who thought they were going to have a normal July Fourth.

One Trump tweet prompted U.S. District Judge George Hazel in Maryland to call for a Wednesday afternoon emergency conference so he could understand what was going on. But he wasn’t the only one. U.S. District Judge Jesse Furman–the judge whose decision to block the citizenship question was found to have been warranted by the Supreme Court–also called for an emergency conference depending on what happened during the Hazel conference.

This single tweet prompted two U.S. federal judges presiding over census litigation in to convene emergency conferences, one of which is starting now. https://t.co/gX6xT9xh2a

The transcript of the Hazel conference has been released. It was clear from the start that everyone involved was confused.

Judge Hazel apologized to DOJ attorney Joshua Gardner for interrupting his vacation, but said that it was necessary because Trump tweeted something that “directly contradicted the position” Gardner shared with him on Tuesday. 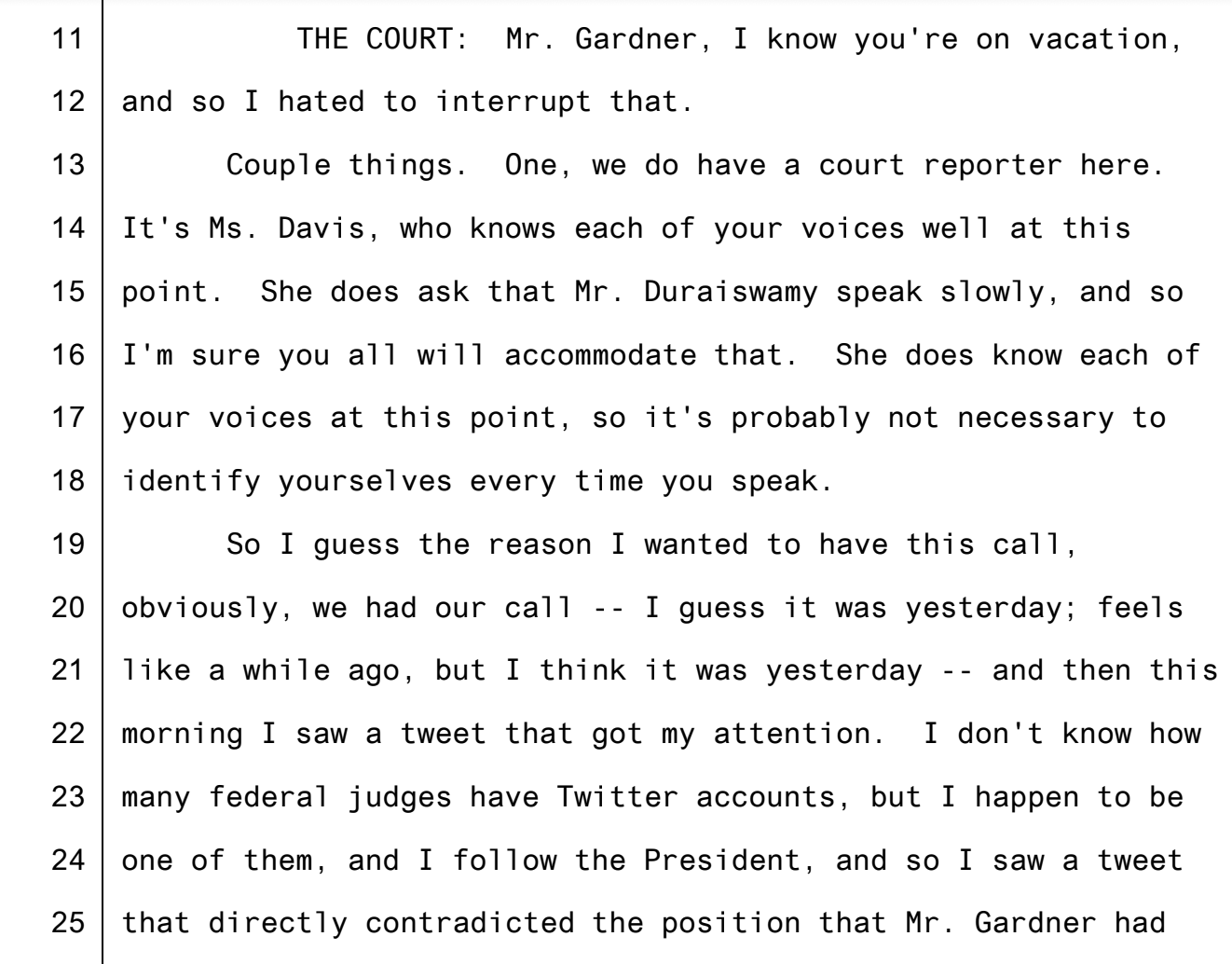 Here’s what the president tweeted: “The News Reports about the Department of Commerce dropping its quest to put the Citizenship Question on the Census is incorrect or, to state it differently, FAKE! We are absolutely moving forward, as we must, because of the importance of the answer to this question.”

And so, Judge Hazel asked the question: “Is the Government going to continue efforts to place a citizenship question on the 2020 census?” 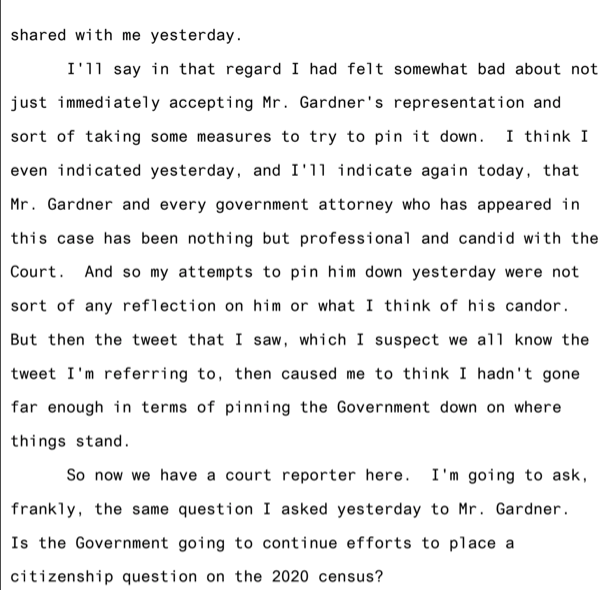 DOJ lawyer: the President’s tweet was news to me.

Gardner responded to the judge’s question by saying that what he told the court on Tuesday was “absolutely my best understanding of the state of affairs and, apparently, also the Commerce Department’s state of affairs, because you probably saw Secretary Ross issued a statement very similar to what I told the Court.”

“The tweet this morning was the first I had heard of the President’s position on the this issue, just like the plaintiffs and Your Honor,” Gardner added. 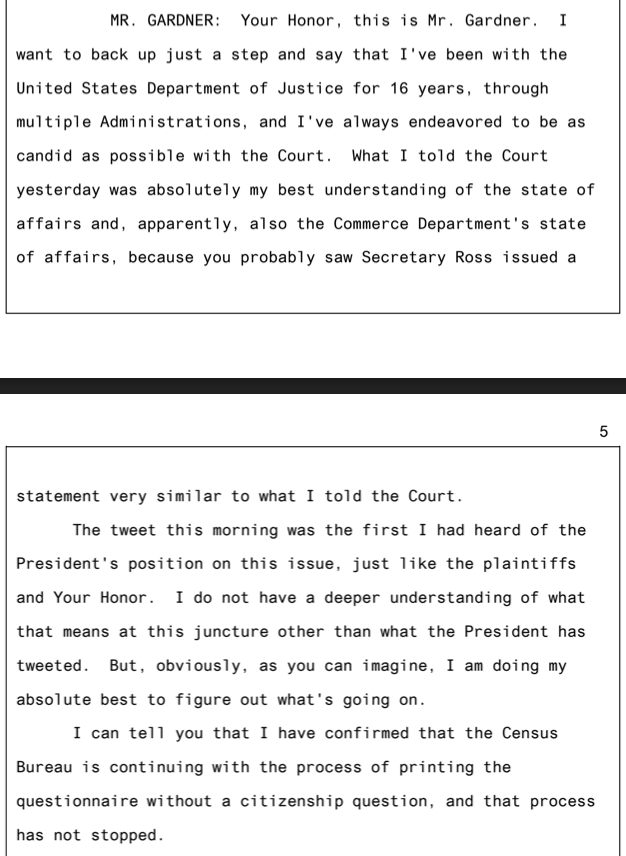 Judge actually wonders for a moment if the parties were going to ask him to stop the president from tweeting. 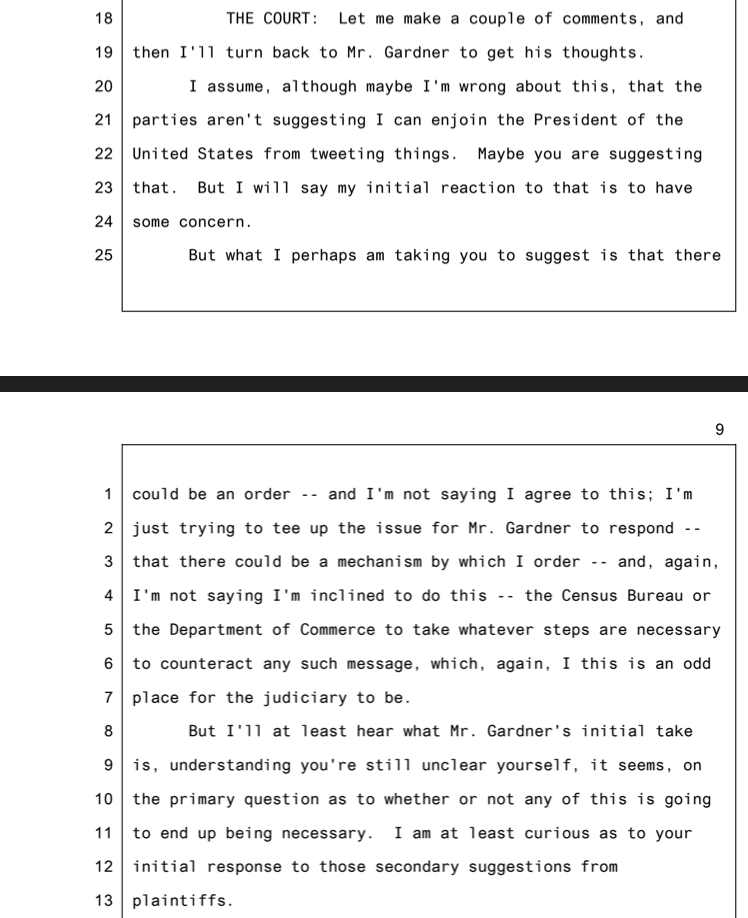 DOJ attorney: “[T]his is a very fluid situation which we are trying to get our arms around….” 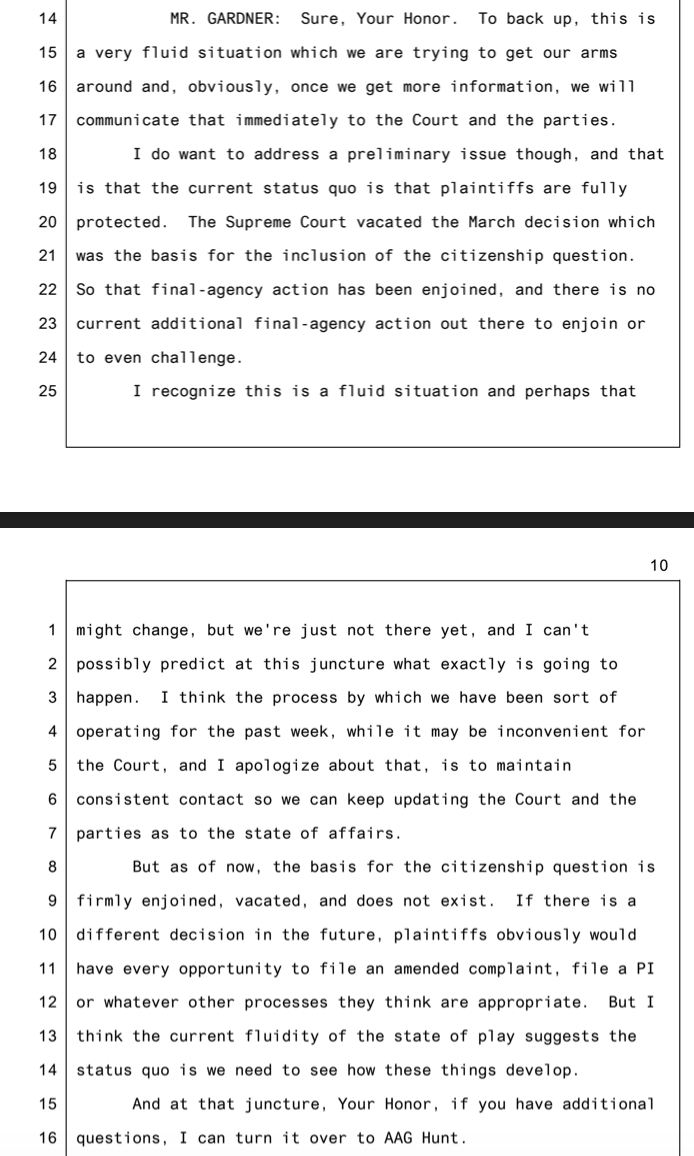 Assistant Attorney General (AAG) for the Civil Division reveals the DOJ has been given an instruction.

AAG Jody Hunt said that the DOJ was asked to “examine whether there is a path forward, consistent with the Supreme Court’s decision that would allow us to include the citizenship question on the census.”

“We think there may be a legally available path under the Supreme Court’s decision,” Hunt continued. “We’re examining that, looking at near-term options to see whether that’s viable and possible.” 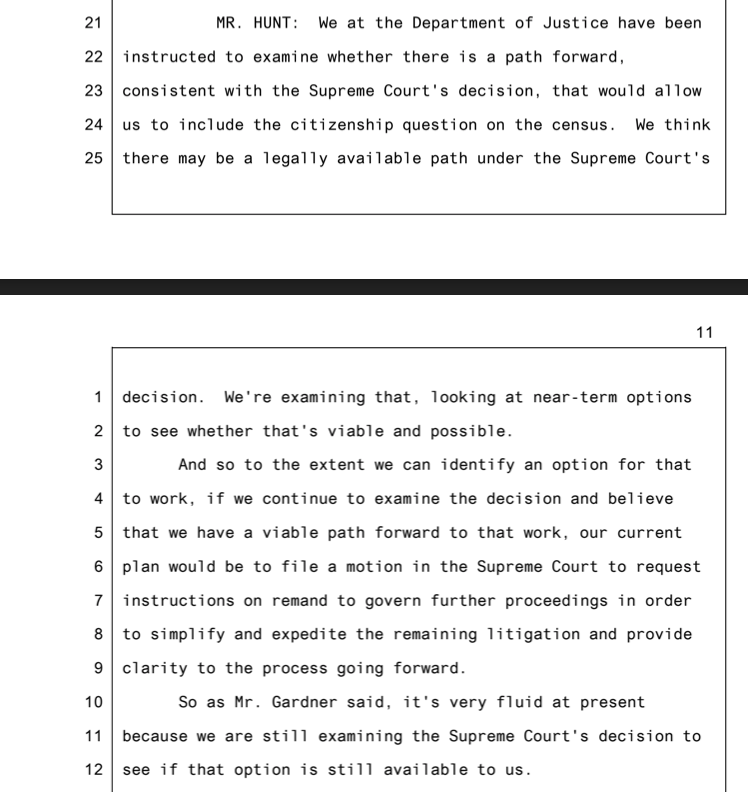 This sounds a lot like what President Trump tweeted after the Supreme Court decision went public.

The president said that he asked DOJ lawyers to “delay the Census, no matter how long, until the United States Supreme Court is given additional information from which it can make a final and decisive decision on this very critical matter.”

The DOJ is apparently following this instruction. In a filing in Judge Furman’s Southern District of New York court on Wednesday, the DOJ said it is attempting to come up with “a new rationale for including the citizenship question” on the census.

We are actively working to come up with a new pretext and will inform you as soon as we do.

Judge Hazel asked that the DOJ provide either a stipulation “indicating that the citizenship question will not appear on the census” or a “proposed scheduling order for how we’re going forward on the equal protection claim that’s been remanded to this court.” 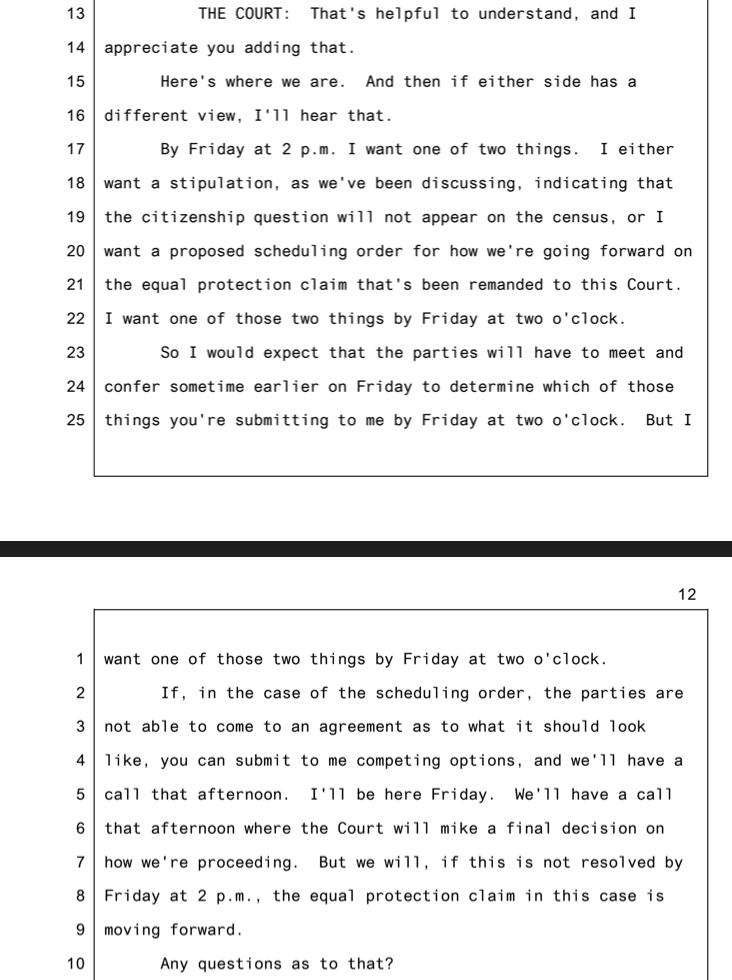 Hazel then asked if there were any questions.

Gardner: Can we please do this on Monday so we can enjoy the holiday?

Gardner asked, given that Thursday is July Fourth, if the judge could push this back until Monday.

The judge said no. “No. Because timing is an issue. Timing is an issue, and we’ve lost a week at this point,” Hazel said. “And this isn’t anything against anybody on this call. I’ve been told different things, and it’s becoming increasingly frustrating.”

“If you were Facebook and an attorney for Facebook told me one thing, and then I read a press release from Mark Zuckerberg telling me something else, I would be demanding that Mark Zuckerberg appear in court with you the next time because I would be saying I don’t think you speak for your client anymore,” he added. 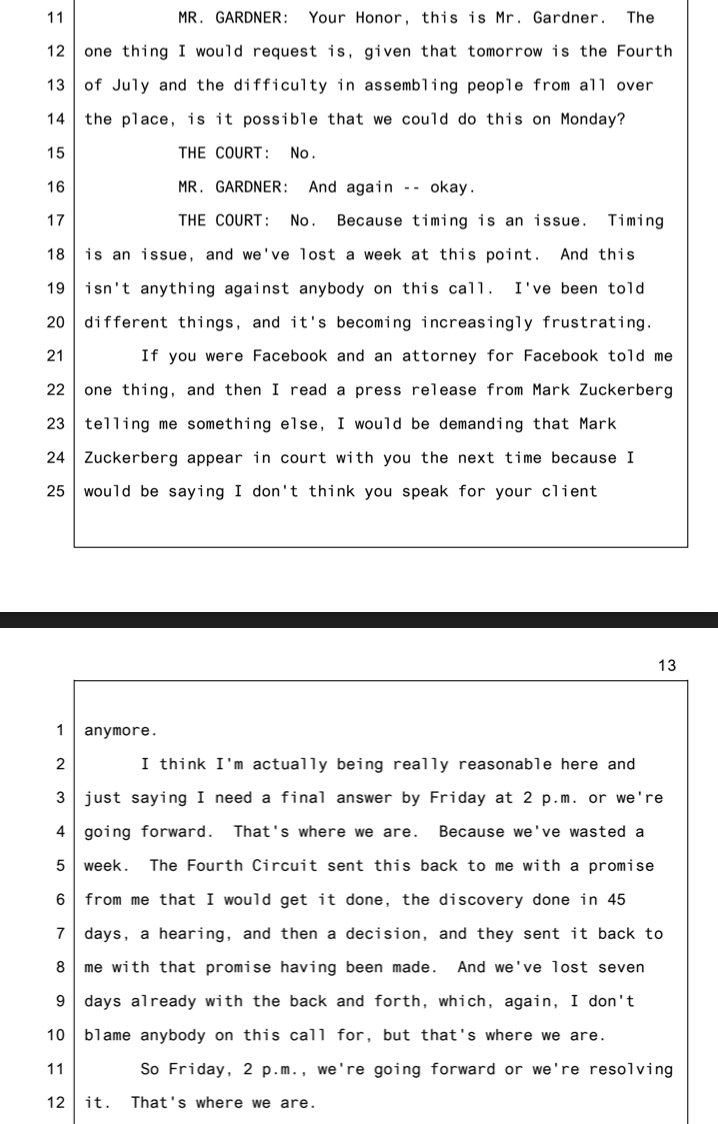 Plaintiffs’ lawyer: So, was the June 30 deadline the government set not true? 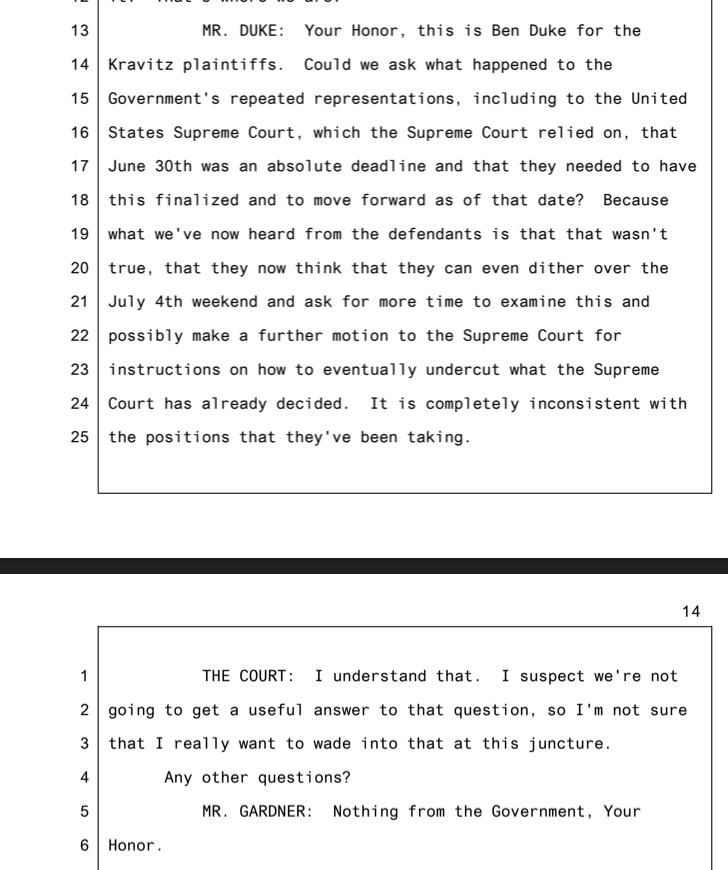