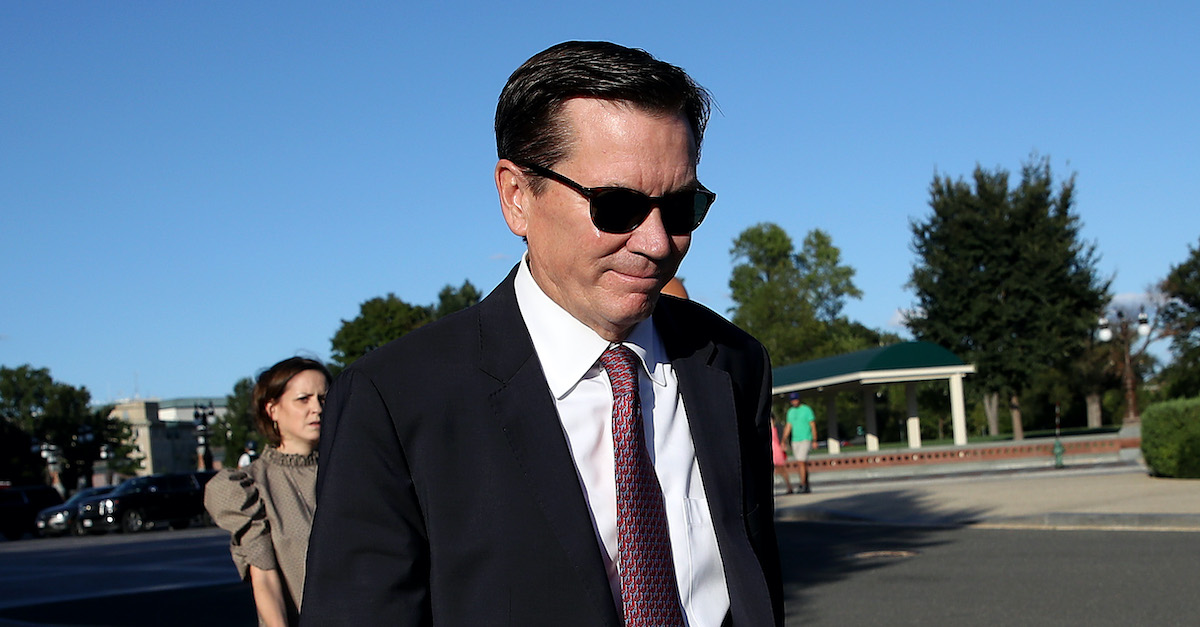 Alex Joel, a current senior officer and former chief of the ODNI’s Office of Civil Liberties, Privacy, and Transparency, penned an op-ed on Thursday for Just Security. In it, he defended the role of inspectors general in the federal government and defended Atkinson as a serious and professional truth-teller.

“[Inspectors General] root out fraud, waste, and abuse, investigate wrongdoing, and ensure that employees can report misconduct without fear of retaliation,” Joel wrote. “Their job is not to tell leaders what they want to hear; it is to ensure that those in power hear the truth. None took his job more seriously than Michael Atkinson.”

As the ICIG, Atkinson was responsible for overseeing the Ukraine whistleblower complaint that formed the foundation for Trump’s impeachment earlier this year. Atkinson, who was appointed by Trump in 2017, found that the whistleblower complaint was “credible” and “urgent.” The complaint was about Trump’s pressure campaign of Ukrainian President Volodymyr Zelensky, which everyone surely knows was geared toward securing investigations of Joe Biden and Hunter Biden.

“The ICIG reviewed the information provided as well as other information gathered and determined that the complaint was both urgent and that it appeared credible.” Atkinson said, concluding that this was a matter that should be revealed to Congress.

After that, Atkinson provided the still-secret-at-the-time complaint to Acting Director of National Intelligence Joseph Maguire–on August 26, 2019. For a time, Maguire did not hand over the complaint to Congress.

That changed, and Maguire defended both the whistleblower’s and Atkinson’s credibility in public.

“I want to stress that I believe that the whistleblower and the inspector general have acted in good faith throughout,” Maguire told Congress in late September. “I have every reason to believe that they have done everything by the book and followed the law.” Maguire is no longer in the DNI role, but was replaced by a Trump loyalist.

Joel also appeared to address the president’s penchant for lashing out at government officials who refuse to toe the party line, saying the most essential role of an inspector general is speaking truth to power.

“Hearing uncomfortable truths can provoke negative reactions, and retaliation is always a risk. That’s why institutional protections are so important, like those embodied in the position of inspector general. It is through inspectors general that employees in the IC must raise their concerns for transmission to Congress, and it is through them that whistleblower protections against retaliation are enforced,” Joel wrote.

“Having the fortitude to speak unpopular truths is part of what it means to be an intelligence professional. But it’s not a one-way street. Leaders and policymakers have a corresponding obligation to support those who speak the truth, even if they disagree with what they are being told. Only then, can we foster the truth-telling environment that we need to thrive as a country.”

Joel is the not the first current Trump administration official to speak out against Atkinson’s firing. Justice Department Inspector General Michael Horowitz released a scathing condemnation of the move earlier in April.

National security attorney Mark Zaid, who was part of the legal team that represented the Ukraine whistleblower, praised Joel’s op-ed, saying it “speaks truth to power.”

This op-ed, by senior ODNI official speaks truth to power.

To those who understand article, it reinforces notion that ICIG Atkinson handled our frmr #whistleblower's complaint properly & lawfully, and that this was essential for good govt.

This took guts to write.

Current senior officer with Office of Director of National Intelligence, writing in his personal capacity.

This is really something! "Truth is literally a matter of life and death." It took courage to write. He may pay a price. Trump is waging a war on truth, ethics and national security—aided by Republican Senators who, at most, wring their hands and issue mild statements of concern. https://t.co/cjFvDjP7RA

It would not be a surprise if Joel was sent packing. The White House has made no secret of purging its ranks of perceived anti-Trumpers and replacing them with perceived loyalists. The Atkinson firing was a prime example, but so was the broader shake-up of the inspectors general.