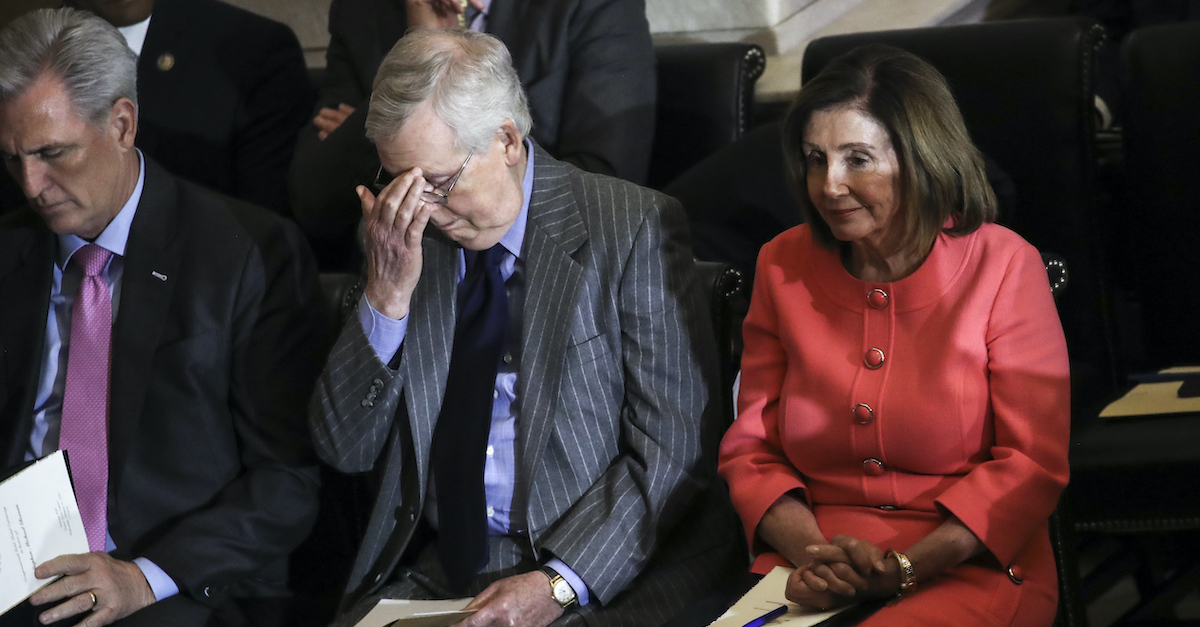 “The SBA is currently unable to accept new applications for the Paycheck Protection Program (PPP) based on available appropriations funding,” the SBA said on Thursday. “Similarly, we are unable to enroll new PPP lenders at this time.”

Applicants are now being encouraged to follow up directly with the agency via the COVID-19-specific SBA portal.

Congress recently appropriated $349 billion spaced across the PPP and EIDL for small business via the largest bailout in human history.

The Coronavirus Aid, Relief, and Economic Security Act (CARES Act), was passed at the end of March. Even before passage, many critics and left-wing economists warned the $2 trillion allocated between helicopter-dropped stimulus payments, small business loans and a highly controversial corporate slush fund was not nearly enough.

Those warnings have quickly proven beyond prescient.

Last Thursday, McConnell was set to authorize that spending by way of a unanimous voice vote. The additional funding would have been a one-time congressional outlay to the SBA in order to shore up the swamped PPP and EIDL programs. No changes in the overarching CARES Act would have been included–just a jolt of liquidity for struggling small business owners and 1099 sole proprietors.

Democrats were not willing to play ball.

According to CNBC, Sen. Ben Cardin (D-Md.) objected to the measure and the legislation stalled out. Democrats sought to include alter some language in the original bill and killed the bill on the grounds that their preferred legislative projects–more funding for state governments and hospitals; additional lending options–were not considered in the clean cash-infusion bill.

McConnell groused and told Democrats not to “block emergency aid you do not even oppose just because you want something more.”

Pelosi took up Cardin’s language while speaking with reporters later that day. She described a call with Mnuchin during which the treasury secretary pleaded for additional SBA funding, then characterized Mnuchin’s request in dismissive terms, saying he “asked for a quarter of a trillion dollars in 48 hours, with no data.”

SBA Administrator Jovita Carranza confirmed on Thursday afternoon that the much ballyhooed data is now in–and it’s not looking good.

“By law, the SBA will not be able to issue new loan approvals once the programs experience a lapse in appropriations,” Carranza said in a joint statement with Mnuchin posted on the SBA’s website.

“We urge Congress to appropriate additional funds for the Paycheck Protection Program—a critical and overwhelmingly bipartisan program—at which point we will once again be able to process loan applications, issue loan numbers, and protect millions more paychecks,” the statement continued. “The high demand we have seen underscores the need for hardworking Americans to have access to relief as soon as possible. We want every eligible small business to participate and get the resources they need.”

The SBA also claimed to have “processed more than 14 years’ worth of loans in less than 14 days.”

Many millions of small business owners have been left out of the first tranche of COVID-19 relief funds and the SBA itself faces a weeks-long backlog of requests, but Congress is currently not scheduled to return in full until May 4.

Pelosi, for her part, appears to be doing just fine. She’s got two $23,000-priced freezers full of ice cream.