How Long Will Kathy Russell Spend in Prison? No Time At All. 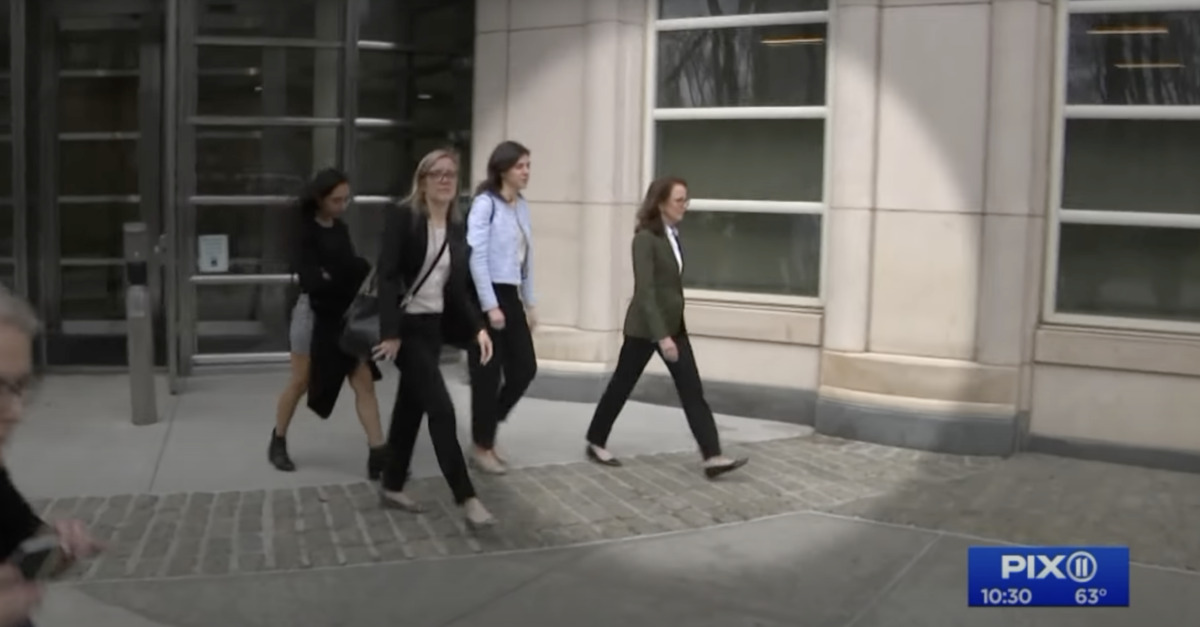 The former bookkeeper for the notorious NXIVM sex cult will spend 24 months on probation after pleading guilty to one count of visa fraud in violation of federal law–a marked victory for her defense.

Kathy Russell’s sentence will also include 200 hours of community service, a judge in Brooklyn determined on Wednesday afternoon.

At a plea hearing in April 2019, Russell admitted to knowingly and intentionally providing the U.S. Consulate in Mexico with a fraudulent employment letter for Loreta Garza Davila, a NXIVM member who would eventually become a high-ranking “slave” in Keith Raniere’s secretive Dominus Obsequious Sororium women-only club.

Specifically, the employment letter stated that Garza Davila, a Mexican national, was a “management consultant” who was hired by NXIVM. In truth, she was formally hired to oversee Rainbow Cultural Gardens, an international chain of schools based on Raniere’s philosophy that promised to immerse infants and young children in numerous languages.

“This document, which I signed, described Miss Garza’s job title to be a management consultant at NXIVM Corporation and stated she would provide advice on strategic marketing needs of NXIVM,” Russell said during her plea hearing. “While Miss Garza did perform some of the duties described in the letter, she spent most of her time developing and running a separate company called Rainbow Cultural Gardens.”

In turn, Garza used the fake consulting money to pay employees of the experimental school, according to the U.S. Attorney’s Office. Prosecutors allege that none of those employees reported their income and that the school’s entity itself was also a tax scofflaw.

“I knew Miss Garza worked for Rainbow Cultural Gardens, but I submitted a letter on her behalf that intentionally omitted that fact,” Russell continued. “I also knew that Miss Garza was not keeping the full amount of the salary listed in that letter. The letter that I submitted was required to be filed by the immigration laws.”

During her plea agreement, Russell explained that her false statements were instrumental in Garza Davila obtaining a TN visa–a special non-immigrant work visa created in accord with NAFTA.

“I know what I did was wrong and I am very sorry for the trouble I caused,” Russell added in allocution. “I compromised my principles and I’m going to have to live with that for the rest of my life.”

The 63-year-old accountant was the sixth and final NXIVM co-defendant to be sentenced–though her defense attorneys implored U.S. District Judge Nicholas Garaufis not to take that into account.

“No significance should be attached to the fact that Kathy was the last defendant to plead guilty,” a footnote in her Tuesday sentencing memo argues–emphasis in the original, “as counsel reached out to the government in the hopes of reaching a resolution well before any of the defendants pled guilty.”

*****BREAKING NEWS: #NXIVM bookkeeper Kathy Russell gets no prison, 2 years probation, 200 hours community service. Judge calls it “classic case study as to how a cult environment injures people even as they engage in the improper activities of the cult.”https://t.co/rN3kTqSp2q

In that memo, defense attorneys cast the bookkeeper as a victim of Raniere’s “negative influence” while accepting full culpability for her own actions. Additionally, the defendant said, she was particularly vulnerable to the cult leader’s manipulations due to her lifetime of abusive relationships with men and other authority figures. Russell asked the court to impose a term of home confinement or probation.

“This sentencing is the final event in an almost four-year-old litigation that has demonstrated to everyone the great harm that can be done to so many by so few,“ Garaufis said during the court proceedings, according to the Albany Times Union’s Robert Galvin. The judge went on to say that Russell’s case, in particular, was “a classic case study as to how a cult environment injures people even as they engage in the improper activities of the cult.”

Federal prosecutors conceded that Russell was not among the most culpable of the six convicted sex cult defendants and asked for up to one year in prison–a substantial departure from Raniere’s life sentence or the roughly three-and-a-half year sentences handed down to Nancy Salzman and former Smallville actress Allison Mack, who were both high-profile NXIVM leaders.

“But her willingness to obey Raniere’s directives without question,” Assistant U.S. Attorney Tanya Hajjar told Garaufis, “caused real and significant harm to others.”

“She was willing to undertake nearly any task assigned to her, from transporting a teenager across the Canadian border with a false identification card to defrauding United States immigration authorities by signing and presenting false documents in support of a visa application,” the government added in their sentencing memo.

The court ultimately found that Russell’s “involvement in NXIVM was not insignificant” but agreed that “substantial mitigating factors” worked in her favor.

“When you joined NXIVM, you had already experienced physically, emotionally, and verbally abusive relationships,” Garaufis noted. “As described in the sentencing submissions that the court has received, you experienced abuse and neglect when you were growing up. You left behind those painful family relationships to move to Alaska, only to find your- self in abusive intimate relationships there. After that, when you joined NXIVM, you were again subject to abusive behavior, this time at the hands of Mr. Rainiere and other NXIVM members.”

Russell’s sentence is the lightest of any NXIVM defendant.

Editor’s note: this story has been amended post-publication to include a link to the court’s full sentencing comments.