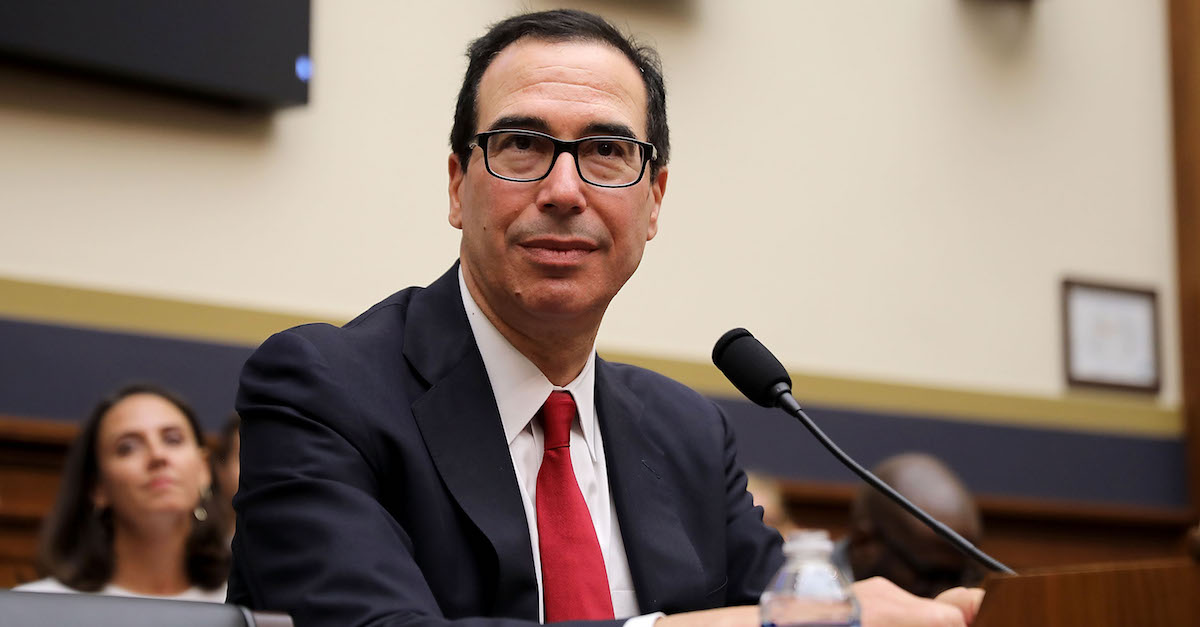 Mnuchin wrote a letter to Neal on Monday that said the “Committee’s request is unprecedented, and it presents serious constitutional questions, the resolution of which may have lasting consequences for all taxpayers.” Mnuchin added that the “Supreme Court has held that the Constitution requires that Congressional information demands must reasonably serve a legitimate legislative purpose.”

University of Iowa Law Prof. Andy Grewal, a tax policy scholar, previously told Law&Crime that he was skeptical of Neal’s request and warned that broad request might fall short of “legitimate legislative purpose.”

“As the [Neal] letter hints, Congress has broad powers and they’re acting for proper purposes and usually the mental thoughts of the legislature don’t negate the validity of the inquiry, but the question here is, are they in fact pursing a legitimate purpose?” Grewal asked in a separate interview. “Generally, there are strong presumptions of Congress’ investigations, but that doesn’t mean it’s conclusive if they just say they need information.”

In other words, it seemed obvious from the start that this would be how Mnuchin would reply.

Neal claimed that the Committee was “considering legislative proposals and conducting oversight related to our Federal tax laws, including, but not limited to, the extent to which the IRS audits and enforces the Federal tax laws against a President.”

“Under the internal Revenue Manual, individual income tax returns of a President are subject to mandatory examination, but this practice is IRS policy and not codified in the Federal tax laws,” Neal added. “It is necessary for the Committee to determine the scope of any such examination and whether it includes a review of underlying business activities required to be reported on the individual income tax return.”

Neal numbered seven areas to be responsive to the request. These included: Trump’s 2013-2018 tax returns; tax returns of eight Trump-related entities (pictured below); statements about whether these tax returns are or were ever under audit (as Trump has repeatedly said in an effort not to release his personal tax returns); statements as to why there was an audit if there was one; all administrative files related to Trump and these entities; a statement in the event that Trump or these entities did not file tax returns last year.

Mnuchin said that he consulted the Department of Justice before responding to Neal’s request.

“In reliance on the advice of the Department of Justice, I have determined that the Committee’s request lacks a legitimate legislative purpose,” he said. “[T]he Department is therefore not authorized to disclose the requested returns and return information.”

Mnuchin also said that he was told that William Barr‘s DOJ “intends to memorialize its advice in a published legal opinion as soon as practicable.”

“Although the Department is unable to provide you with the requested confidential tax returns and return information, we renew our previous offer to provide informations concerning the Committee’s stated interest in how the IRS conducts mandatory examinations of Presidents, as provided by the Internal Revenue Manual,” Mnuchin concluded. “If the Committee is interested, we remain committed to providing such an accommodation.”

Neal said he was aware of Mnuchin’s response but isn’t sure how to proceed just yet.

“Today, Secretary Mnuchin notified me that the IRS will not provide the documents I requested under Section 6103 of the Internal Revenue Code,” Neal said. “I will consult with counsel and determine the appropriate response.”