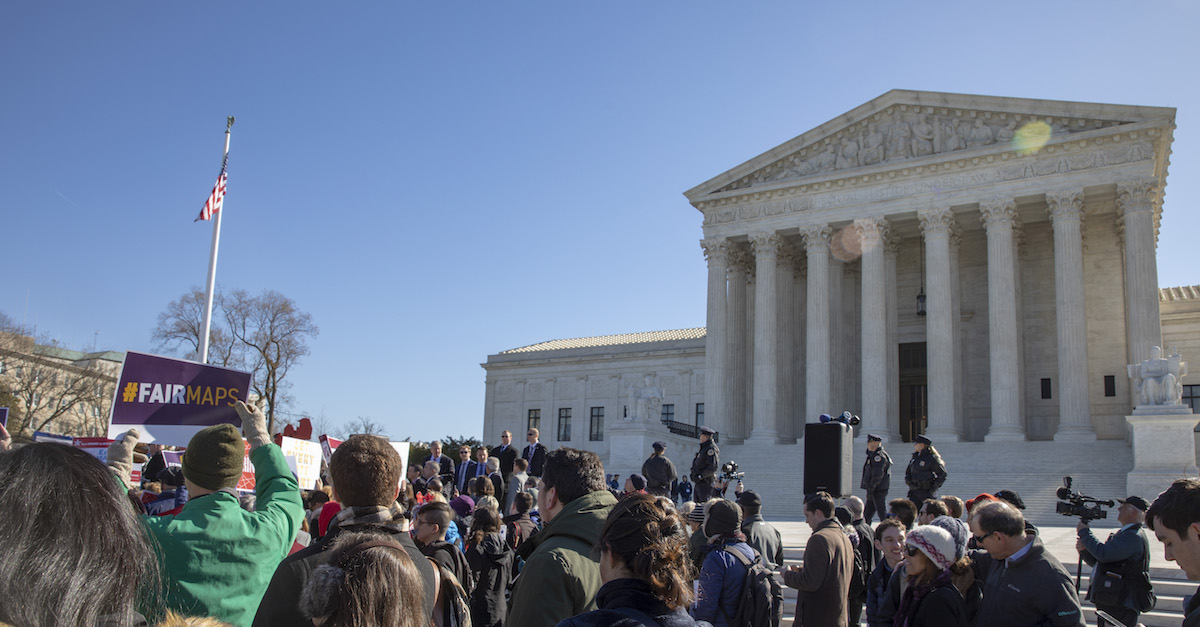 Just a few weeks ago, the Supreme Court decided 5-4 that partisan redistricting is a political question and therefore not reviewable by federal courts. Effectively speaking, this means these courts cannot judge whether extreme gerrymandering is constitutional or not. In direct response, the North Carolina chapter of Common Cause has sued the Republican leadership of the General Assembly over the state’s legislative maps, arguing that GOP officials drew the districts to ensure control over the House and Senate.

Common Cause’s expressed goal is to have the maps redrawn, possibly by an independent citizen commission.  Stanton Jones, an Attorney representing Common Cause, has accused deceased GOP operative Thomas Hofeller of using the voting maps as a means of boosting Republican politicians and suppressing minority voters.

“2018 was a Democratic wave election,” Jones said. “It was big enough to break the seawall that Dr. Hofeller designed to secure Republican super-majorities, but even the 2018 wave couldn’t overcome the stronger seawall that legislative defendants put into place to guarantee themselves at least a majority in both chambers.”

Hofeller’s estranged daughter reportedly sent many of his computer files to Common Cause. Some may recall that Hofeller’s documents were also obtained by the ACLU and were set to be used in their case against President Donald Trump regarding the citizenship question on the 2020 Census.

Attorney Phil Strach, representing the Republican leadership in the State Legislature, has asked “How do you know what is a fair map politically?”

“There is no way to know what a fair map looks like,” Strach said. “The only way you can do that is to impose by judicial fiat some notion of fairness. That would require the court to decide essentially how many Republicans and Democrats should be in the legislature. That is obviously a political issue, not a legal judgment.”

Still, when looking at the numbers, it does appear that the electoral map had extreme effects on the outcome of the 2018 midterm election. Republican state legislative candidates won less than half the overall vote, but hold 58 percent of the State Senate and 54 percent of the House. In the congressional races, Democrats faired even worse, winning 50 percent of the vote but only 23 percent of the seats.

“We have forever had a flawed process that preordains so many of our congressional and legislative elections to the party,” said Bob Phillips, Executive Director of Common Cause North Carolina. “I believe what’s at stake is the beginning of the end of that.”

This case, though backlit by the Supreme Court’s decision, is actually rather similar to a case that occurred in Pennsylvania, in which the State Supreme Court deemed the congressional maps to be unconstitutional. The change occurred after Republican Candidates won 49 precent of the state vote but secured 72 percent of the state’s congressional seats–numbers that are actually slightly more even than in North Carolina. That said, as of right now, the case is specific to the state legislative districts and doesn’t include congressional remapping efforts.

The trial, which could set a precedent for redistricting cases in Michigan, Ohio, Georgia, Texas, Louisiana, Connecticut, Mississipi, Alabama, and Maryland, is expected to last two weeks, at which time most pundits are predicting an appeal to the State Supreme Court – whatever the outcome.

It’s possible that, if the challenge proves successful in N.C., there will be enough time to have a major impact on the upcoming election. Per NPR:

If the voting rights groups that have challenged North Carolina’s state legislative districts succeed, the maps could be ordered redrawn in time for the 2020 election in a state that is closely divided politically.