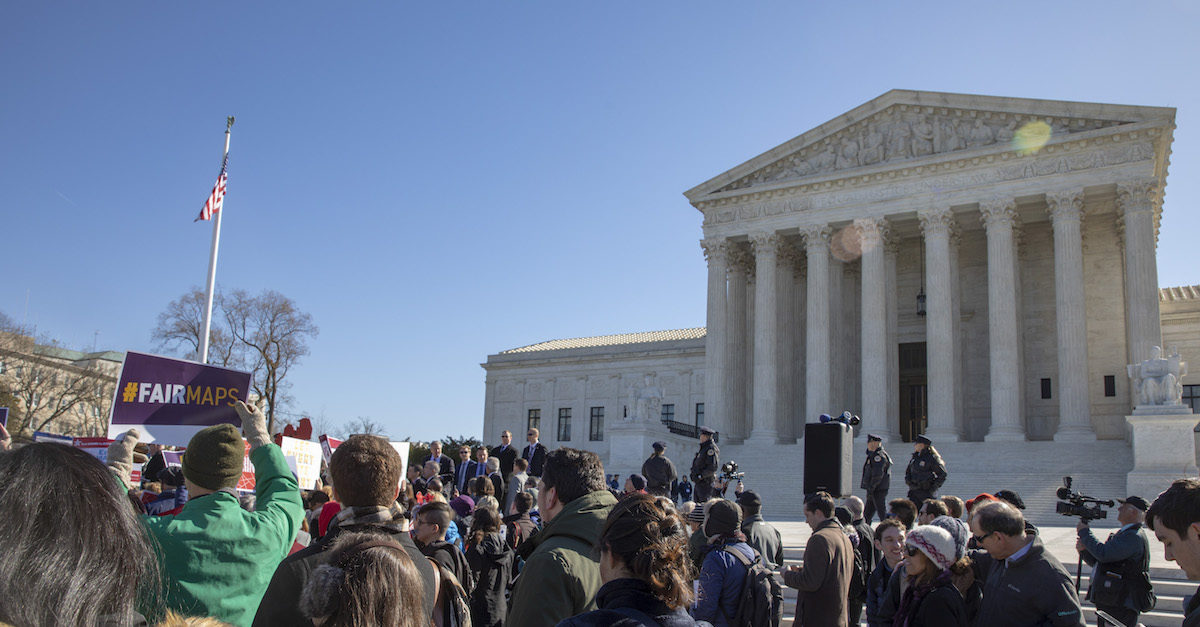 WASHINGTON, DC – MARCH 26: Protesters attends a rally for “Fair Maps” on March 26, 2019 in Washington, DC. The rally was part of the Supreme Court hearings in landmark redistricting cases out of North Carolina and Maryland.

A North Carolina state court on Monday issued a preliminary injunction preventing the state’s congressional voting map from taking effect in advance of 2020 election due to “extreme partisan gerrymandering.”

According to the ruling, the 14 plaintiffs were likely to show “beyond a reasonable doubt” that the map drawn by Republican lawmakers constituted partisan gerrymandering that would unlawfully disadvantage the state’s Democratic voters in a way that is “contrary to the fundamental right of North Carolina citizens to have elections conducted freely and honestly.”

The three-judge panel noted that while the Supreme Court in June ruled that federal courts did not have jurisdiction to intervene in cases of partisan gerrymandering, the justices explicitly stated that state courts maintain the power to consider the issue under state law.

“Indeed, as the Supreme Court of the United States recently explained, partisan gerrymandering claims are not ‘condemned[ed]…to echo in the void,’ because although the federal courthouse doors may be closed, ‘state constitutions can provide standards and guidance for state courts to apply,’” the panel wrote, quoting directory from the Supreme Court’s summer ruling.

The judges specifically based their decision on evidence acquired from the computer records of Thomas Hofeller, the recently deceased GOP operative and godfather of modern-day gerrymandering, who spearheaded the state’s efforts to redraw voting maps.

“Quite notably in this case, the 2016 congressional districts have already been the subject of years-long litigation in federal court arising from challenges to the districts on partisan gerrymandering grounds,” the order stated. “As such, there is a detailed record of both the partisan intent and the intended partisan effects of the 2016 congressional districts drawn with the aid of Dr. Thomas Hofeller and enacted by the General Assembly.”

The ruling heeded Republican lawmakers’ objections to redrawing the state’s voting lines with the 2020 election rapidly approaching, but ruled that the harm in keeping the 2016 map in place outweighed those concerns.

“Simply put, the people of our State will lose the opportunity to participate in congressional elections conducted freely and honestly to ascertain, fairly and truthfully, the will of the people,” the court wrote. “The court finds that this specific harm to plaintiffs absent issuance of the injunction outweighs the potential harm to legislative defendants if the injunction is granted.”