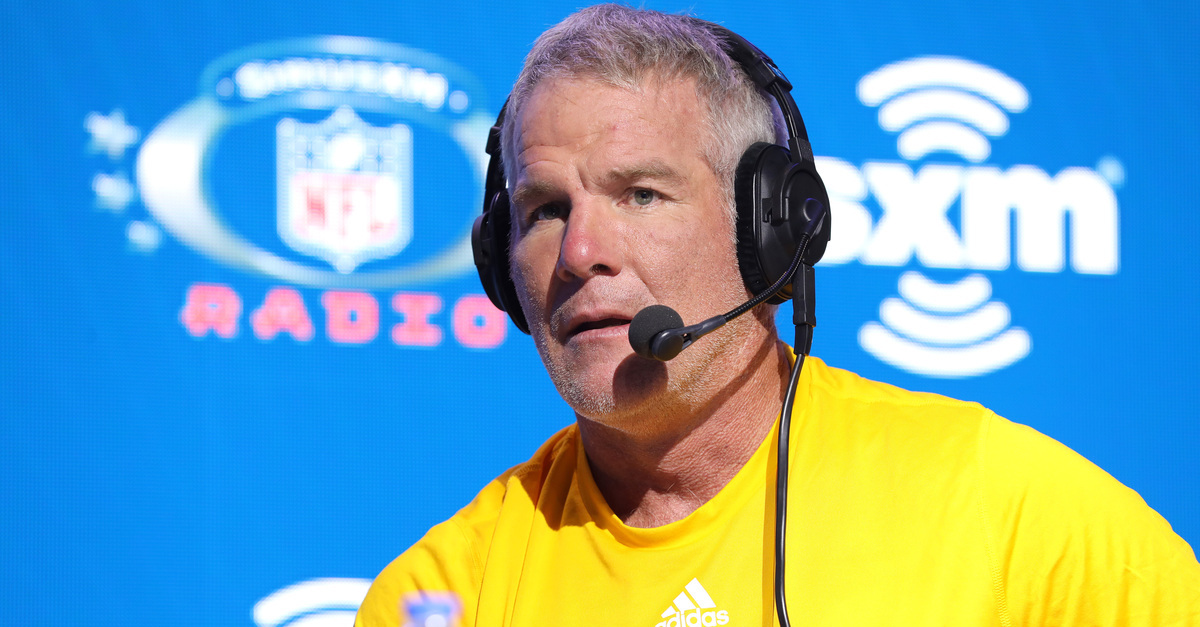 Former National Football League quarterback Brett Favre expressed concern that the media would learn the source and amount of money proposed to be sent to him by a woman convicted in a scandal over misspent Mississippi welfare funds, recently-released text messages show.

“If you were to pay me is there anyway the media can find out where it came from and how much?” the onetime Green Bay Packer wrote in an August 2017 message to disgraced and recently-convicted nonprofit director Nancy New, one of the scheme’s principals.

The exchange renewed questions about what Favre knew about an effort to funnel millions of dollars from a state fund for poverty-stricken families to a volleyball stadium construction project at the university his daughter attended as a volleyball player. His attorney denied the Hall of Famer had any knowledge.

The text messages were attached to a Monday court filing by an attorney for New’s nonprofit.

In February 2020, Mississippi State Auditor Shad White announced that several people had been arrested in connection with an even broader scheme, including New, her son, and a former director of the state’s Department of Human Services, on various charges.

During the course of a months-long investigation, investigators determined that over $77 million was diverted from the Temporary Assistance for Needy Families (TANF) program administered by the state’s DHS in order to benefit the wealthy and well-connected. Agency officials said the plot was the largest fraud case in Mississippi history.

“The funds that were illegally obtained in this case were intended to help the poorest among us,” White said in a press release at the time. “The funds were instead taken by a group of influential people for their own benefit, and the scheme is massive. It ends today.”

Multiple versions of this story have previously been reported by CNN and CBS Sports, among others, based on White’s statements.

Favre and his attorney have repeatedly maintained his innocence regarding the no-show speech claim, and they have insisted the Hall of Famer was ignorant of where the funds were sourced. He has paid most of them back, except an alleged substantial amount of interest.

Favre has not been charged with a crime.

“How in the world are you going to hold me liable for something where nobody told me where to be,” attorney Bud Holmes reportedly said earlier this month, disputing the no-show speech headlines. “Favre had absolutely no knowledge of it . . . . It was up to them to designate when and where.”

The contract for that agreement is available here.

But a new filing in an ongoing civil lawsuit suggests the payments made to Favre may have actually been part of the overall effort to secure funding for the new volleyball stadium, according to a story by Anna Wolfe in Mississippi Today.

That filing is the source of the new text messages and comes by way of an attorney representing New’s nonprofit. The group’s former director, who pleaded guilty to 13 felonies, is now working with prosecutors.

“I could record a few radio spots here initially I’m sure right here,” Favre texted New in July 2017. “See how it is received and whatever compensation could go to USM.”

To which New replied: “The first phase could be $500,000 and after Sept. we can renew. This is a good approach. What do you think?”

“Was just thinking that here is the way to do it!!” Favre answered.

As the volleyball stadium-funding effort eventually picked up steam, then-governor Phil Bryant ousted then-DHS director John Davis because the latter man was suspected of fraud. Bryant then helped the process play out after Davis’ departure.

“Just left Brett Farve [sic],” Bryant texted Nancy New in July 2019. “Can we help him with his project. We should meet soon to see how I can make sure we keep your projects on course.”

According to the outlet, the texts show that Bryant, Favre, New, Davis and others were able to secure some $5 million for the new volleyball stadium at the University of Southern Mississippi. Favre played football for USM from 1987-9o; his daughter played volleyball there from 2017-2022.

Those efforts – including Bryant’s apparent help in securing the funds – were a long time in the making. During the same conversation in which Favre expressed concern for media coverage of the payments, New promised to enlist the Magnolia State’s then-governor in the scheme.

“I understand you being uneasy about that,” New told Favre during that August 2017 conversation, “Let’s see what happens on Monday with the conversation with some of the folks at Southern. Maybe it will click with them Hopefully.”

“Wow, just got off the phone with Phil Bryant!” New texted back. “He is on board with us! We will get this done!”

Republican leadership in the state is not currently pursuing criminal charges over the volleyball stadium construction scandal.

In response to the bombshell filing by New’s attorney, Bryant’s attorney William “Billy” M. Quin II framed the disclosures as the result of a discovery dispute intentionally spilling over into the press.

“Governor Bryant notified Nancy New’s attorney that he would produce the requested documents even though he isn’t a party to the lawsuit,” Quin said in a statement to CNN. “All of the documents are privileged, so Governor Bryant requested that New’s attorney agree to a protective order that would allow the documents to be used in court with certain reasonable restrictions. Cases should be tried in courts of law where rules of evidence govern and privileges are respected. They should not be tried in the press, where innuendo and speculation sometimes get confused with actual facts. It appears that New’s attorney prefers to try his client’s case in the latter as opposed to the former.”

Law&Crime reached out to Holmes for comment on this story but no response was immediately forthcoming at the time of publication.