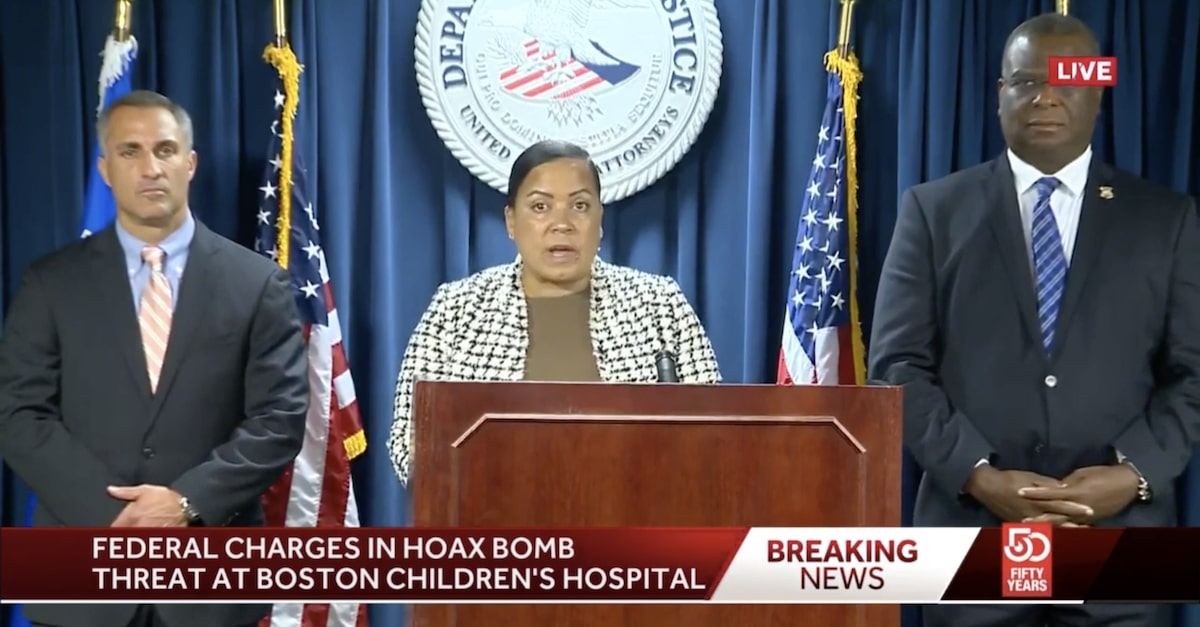 Federal prosecutors announced charges on Thursday against a Massachusetts woman for an alleged hoax bomb threat against the Boston Children’s Hospital, an institution that has been the target of anti-transgender harassment from the right-wing over the past month.

Catherine Leavy, 37, was arrested at her home in Westfield earlier in the day, and authorities say that they recovered the phone used to make the threat. She is charged with one count of making a false telephonic bomb threat and appeared before a federal magistrate judge.

The statute, which carries a maximum 10-year sentence, reads as follows:

Whoever, through the use of the mail, telephone, telegraph, or other instrument of interstate or foreign commerce, or in or affecting interstate or foreign commerce, willfully makes any threat, or maliciously conveys false information knowing the same to be false, concerning an attempt or alleged attempt being made, or to be made, to kill, injure, or intimidate any individual or unlawfully to damage or destroy any building, vehicle, or other real or personal property by means of fire or an explosive shall be imprisoned for not more than 10 years or fined under this title, or both.

Though the alleged caller and the target are both respectively from or in Massachusetts, alleged crime is regulated at the federal level because telephones are an “instrument of interstate . . . commerce,” as the statute points out.

Leavy will face a detention hearing on Friday at noon in the District of Massachusetts.

“You Better Evacuate Everybody, You Sickos”

On Aug. 30, 2022, the hospital received a call from a person who told the operator: “There is a bomb on the way to the hospital. You better evacuate everybody, you sickos,” according to prosecutors.

“As you can imagine this resulted in an immediate response by the hospital and local authorities and federal authorities,” U.S. Attorney Rachael S. Rollins recounted on a press conference on Thursday. “The hospital and the surrounding area were placed on lockdown, and the bomb squad was dispatched. It was later determined that no explosive devices were located at the hospital.”

It was not the first threat received by the hospital. Among its many services, it is also home to the Gender Multispecialty Service (GeMS), which provides medical care for transgender youth.

The hospital has been the target of a campaign by Libs of TikTok, a Twitter account with more than 1.3 million followers that has posted roughly half a dozen tweets about its medical care for transgender youth.

Boston Children’s Hospital was exposed for offering “gender affirming” surgeries to minors. After the videos went viral, they quietly updated their website while Politifact ran cover for them with a false fact-check.

The account is run by a former Brooklyn real estate agent named Chaya Raichik. The Washington Post noted that the account has criticized other children’s health care facilities in Omaha and Pittsburgh for their treatments for transgender youth, reporting that threats poured in following that account’s attention.

Raichik told the Post that she condemns any threats of violence.

Though court papers do not point fingers at any specific source of online vilification, the FBI noted the backdrop of internet outrage at GeMS.

“Beginning in August 2022, BCH was subjected to a sustained harassment campaign based on the dissemination of information online regarding the services offered by GeMS,” an FBI affidavit supporting the search warrants reads. “Specifically, BCH and GeMS were accused of engaging in child abuse involving pedophilia, grooming, and mutilation of children. This conduct has included harassing phone calls and emails, individual violent and death threats, and threats of mass casualty attacks at BCH.”

“Disturbing to Say the Least”

The earliest Libs of Tik Tok post about medical care for transgender youth at Boston Children’s Hospital appears to be dated Aug. 11, 2022.

On Aug. 17, Rollins released a statement about anti-transgender threats the institution received.

“Today’s news about the alleged threats directed at Boston Children’s Hospital transgender health program is disturbing to say the least,” Rollins wrote in a statement on Aug. 17, 2022. “Children deserve an opportunity to thrive and grow as their own authentic selves. Parents/guardians and health care providers who support them in that journey should be allowed to do so free of threats and harassment. I want to make it clear that the Department of Justice will ensure equal protection of transgender people under the law.”

During his confirmation hearings, Attorney General Merrick Garland focused on his experience prosecuting the Oklahoma City bombings while making the case for his tenure to focus on the challenge of confronting hate and extremism in the wake of the Jan. 6 attack on the U.S. Capitol.

“At the Justice Department, we view confronting hate crimes as both our legal and our moral obligation,” Garland said.

At the time, Rollins announced that a then-newly established hotline, 1-83-END-H8-NOW, received dozens of calls and emphasized that authorities were pursuing “all leads.”

“While free speech is indeed the cornerstone of our great nation, fear, intimidation and threats are not,” Rollins wrote. “I will not sit idly by and allow hate-based criminal activity to continue in our District.”

On Wednesday, the same district announced the guilty plea of a California man who threatened Merriam-Webster, which is based in Springfield, Mass., over the dictionary’s gender identity entries for “female” and “girl.”

Leavy does not currently have a defense attorney listed on the docket.