President Donald Trump speaks during a campaign rally on October 27, 2020 in Omaha, Nebraska. With the presidential election one week away, candidates of both parties are attempting to secure their standings in important swing states.

President Donald Trump has consistently assaulted and degraded the basic components of U.S. democracy during his time in office, according to over 2,000 lawyers across the country.

In an open-letter-like primer released Wednesday, Lawyers Defending American Democracy (LDAD), documented what they view as several “fundamental democratic principles” that have been attacked by the president and his “enablers” over the past three-plus years.

“As the November 3 election draws near, it is important for all lawyers in this great country – Republicans, Democrats and independents alike – who have a deep and abiding belief in the basic principles that have guided this nation since its founding to consider the impact of what the president has done on the future of our democracy,” the document says.

“That democracy is a delicate arrangement and depends for its survival on widespread and largely voluntary adherence to established rules and norms and on leaders who support them,” the primer goes on. “Time and time again, this president has ignored those rules, ignored those norms and has urged others to do so. If continued, behavior of that kind has ruinous potential for us all.”

According to the document, seven distinct areas are highlighted–in chart form–that provide the basis for the attorneys’ argument.

Former Massachusetts attorney general and LDAD leader Scott Harshbarger described the effort as “a visual roadmap addressing the violations Donald Trump has scorched in the earth.”

These principles, per the compendium, include: (1) the separation of powers; (2) the impartiality of the U.S. Department of Justice (DOJ); (3) the impartiality of other government agencies and officials; (4) avoiding corruption and the appearance of corruption; (5) the integrity of the voting process; (6) the truthfulness of public officials; and (7) respect for the rights and dignity of all individuals, regardless of race, ethnicity, national origin or religion.

Each principle contains a brief explanation followed by an assertion that Trump and his subordinates have, in general, “routinely and repeatedly” worked to grind down building blocks of democracy in order to amass more personal power for the president and the GOP in general.

Those introductory paragraphs are followed by the aforementioned charts which provide two-to-seven examples of each alleged “violation”–along with the when and the where–as well as a proposed reform.

Here’s an example one such chart: 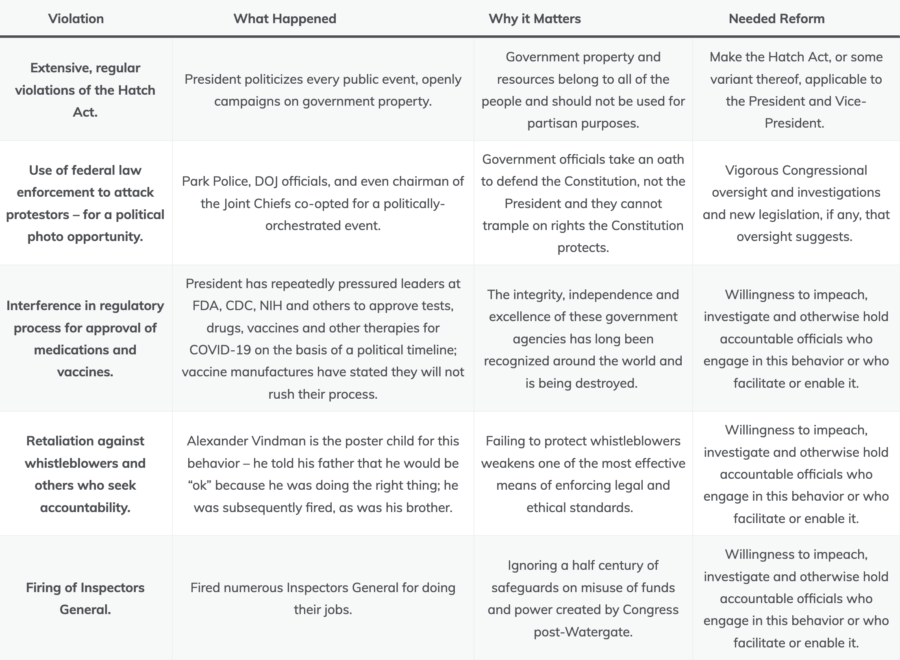 Readers will note that he suggested policy prescriptions are not particularly thorough or far-reaching. Most of the proposals lack details and appear to be an appeal to the better angels of the U.S. Congress. Critics of the 45th president, however, will likely be glad to see a collection of his many controversies in an easy-to-read and easily accessible format due to the visual aids.

“We have sounded a persistent and urgent call for the President to abandon his dangerously destructive behavior and turn to a style of leadership that lies within the boundaries illuminated by the law, by our rich history and by our deeply embedded traditions,” Harshberger added.

The group characterized Trump’s actions as an “assault” on Democracy that have “all of the earmarks” of a “slow motion” coup.

“After considering those principles and the degradation of them the president has attempted, we ask you to think about what you can do, and what you can urge others to do, through advocacy, litigation, voting and the other activities in which lawyers have historically engaged in troubled times to stop what in the last analysis has all of the earmarks of a coup in slow motion,” the primer says.

Law&Crime reached out to LDAD for comment and clarification on this story but no response was forthcoming at the time of publication.