Fired Trump national security advisor Michael Flynn has fired his defense lawyers ahead of sentencing for reasons that are not immediately clear.

Attorneys Robert Kelner and Stephen Anthony said in a motion to withdraw on Thursday that Flynn had notified them of their firing. 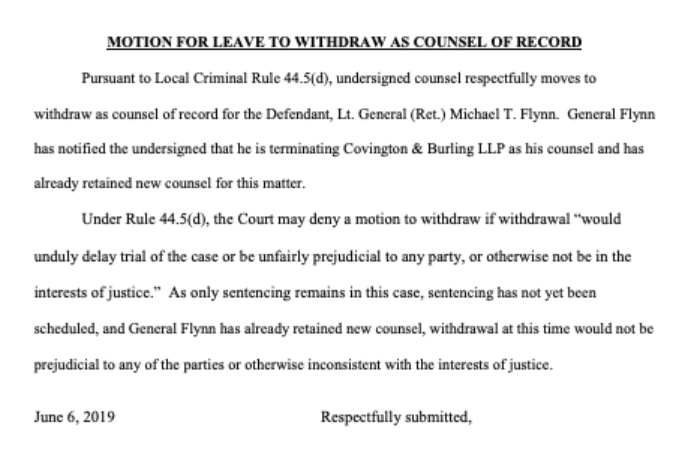 Reaction to the news was swift. Sentencing in the Flynn case has been delayed time and again due to his ongoing cooperation with the government.

We do not yet know who Flynn is hiring to replace Kelner and Anthony, but perhaps it will give us a clue as to Flynn’s strategy heading forward.

Some have suggested that development is “potentially major,” as it could mean Flynn is “moving to a more combative, anti-Mueller approach his family and friends often urge on Twitter.” Perhaps Flynn is also having second thoughts about pleading guilty.

BREAKING: Potentially major development in Flynn case as he fires his current lawyers. Could mean he's moving to a more combative, anti-Mueller approach his family and friends often urge on Twitter. Some have urged him to try to withdraw his guilty plea, a difficult task https://t.co/YWgPkuJ3l2

Strange move by Flynn. Two thoughts: (1) classic delay tactic to fire attorneys this late in the game and (2) could be setting up to try to withdraw his guilty plea – a desperate move that almost never works. https://t.co/oL59EQycsg

Flynn pleaded guilty in Dec. 2017 to lying to the FBI.

Update, 3:40 p.m.: Judge Emmet Sullivan is not immediately allowing Flynn’s lawyers to withdraw because they didn’t play by local court rules. The motion to withdraw was dismissed without prejudice, meaning they can try again to remove themselves from the case.

Update: Judge Sullivan denied the request by Michael Flynn's lawyers to withdraw from the case because it didn't comply with local court rules. pic.twitter.com/VLbq7tNm3p