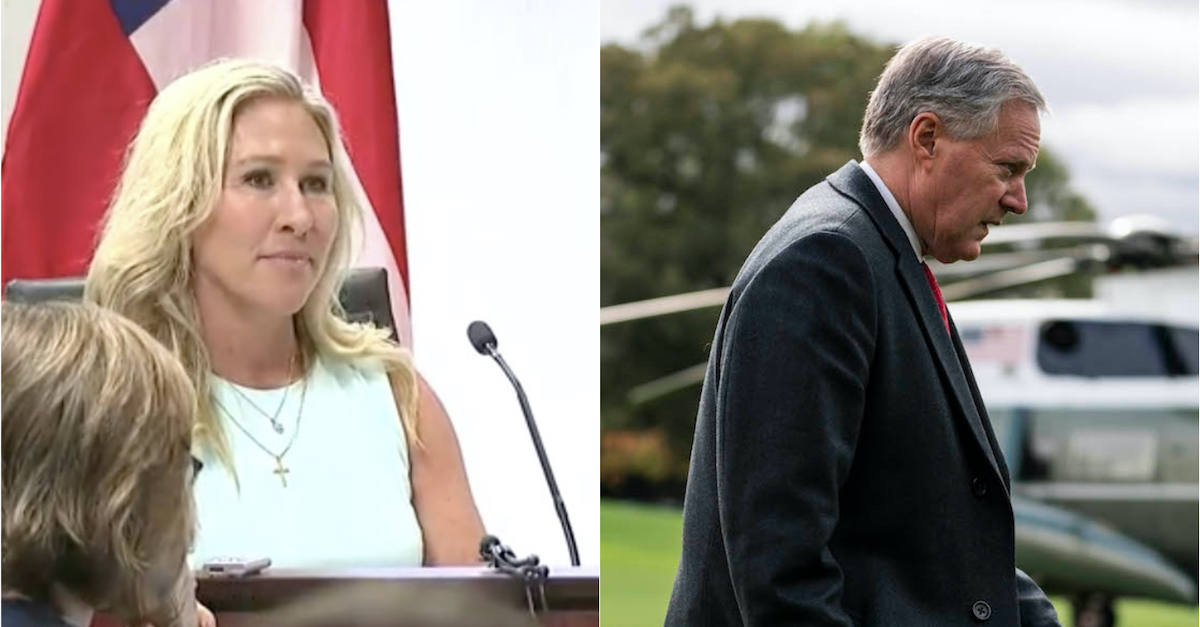 On the left, Rep. Marjorie Taylor Greene (R-Ga.) testifies during a disqualification hearing in Atlanta. On the right, ex-White House Chief of Staff Mark Meadows walks along the South Lawn before then-President Donald Trump departs from the White House on Oct. 30, 2020.

Challengers seeking to knock Rep. Marjorie Taylor Greene (R-Ga.) off the ballot asked a judge on Wednesday to review a recently disclosed text message showing her discussing the possibility of former President Donald Trump invoking “Marshall law.” Greene previously claimed under oath that she could not remember whether she asked Trump to declare martial law, and days later, her leaked communications showed that she brought up the subject to the former president’s then-chief of staff Mark Meadows.

On Friday, Greene took the witness stand in an administrative courtroom in Atlanta, where five Georgia voters backed by the non-profit group Free Speech for People sought to disqualify her under the 14th Amendment’s prohibition on “insurrection.” Ratified in the wake of the Civil War, the third section of that amendment bars anyone who has taken an oath to the Constitution from having “engaged in insurrection or rebellion against the same, or given aid or comfort to the enemies thereof. ” The challengers claim that Greene did just that before the Jan. 6 attack on the U.S. Capitol, during the narrow window after the congresswoman was sworn into office on Jan. 3, three days earlier.

During Greene’s cross-examination, attorney Andrew Celli pressed her on whether she ever urged Trump to declare martial law. Greene insisted that she not to recall the subject arising.

That position, the challengers say, became untenable in light of her text message to Meadows first published by CNN on Monday.

“In our private chat with only Members, several are saying the only way to save our Republic is for Trump to call for Marshall law,” Greene reportedly wrote in Jan. 17, 2021, message. “I don’t know on those things. I just wanted you to tell him. They stole this election. We all know. They will destroy our country next. Please tell him to declassify as much as possible so we can go after Biden and anyone else!”

In a phone interview, Greene’s attorney James Bopp told Law&Crime that he will oppose the court considering it: “It’s totally innocuous and didn’t really say anything.” Bopp noted that, in the message, Greene put the advocacy of “Marshall law” in the mouths of “several” of the Congress members in the private chat. “The next sentence completely disclaims that she’s in favor of it. She gave a completely neutral statement,” Bopp asserted, acknowledging it is also one that is “awkward” and “not grammatically correct.”

“First, it further undermines Greene’s credibility,” their 14-page motion states. “Greene’s testimony at the hearing that she could not remember discussing martial law with anyone was already dubious. This text with President Trump’s Chief of Staff makes her testimony even more incredible because it seems like the kind of message with the kind of recipient that a reasonable person testifying truthfully would remember.”

“Second, the text sheds light on the meaning of her pre-January 6 statements,”  the filing continues. “Eleven days after the failed insurrection, Greene was still fighting against the peaceful transfer of power by advocating extra-legal means. This text, like her statements on January 5, shows the lengths to which she was willing to go to help Mr. Trump remain in power.”

Bopp vehemently denied that during the phone interview, emphasizing that there was not advocacy in the text message.

“That’s the most vicious fabrication I have ever run across in 49 years of practice, and the fact that they sent it around to everybody is just further evidence that this is simply a political hit job,” Bopp said.

Attorney Bryan L. Sells, the Georgia-based counsel in the case, filed the motion for the challengers. Though Beaudrot will not have the final word on their challenge, he will pass on his findings on the law and facts to Georgia Secretary of State Brad Raffensperger (R), who was a vocal opponent of Trump’s effort to overturn the 2020 election.

Update—April 27 at 12:51 p.m.: This story has been updated to include comment by Greene’s attorney James Bopp.

(Screenshot of Greene via C-Span; Photo of Meadows via Sarah Silbiger/Getty Images)