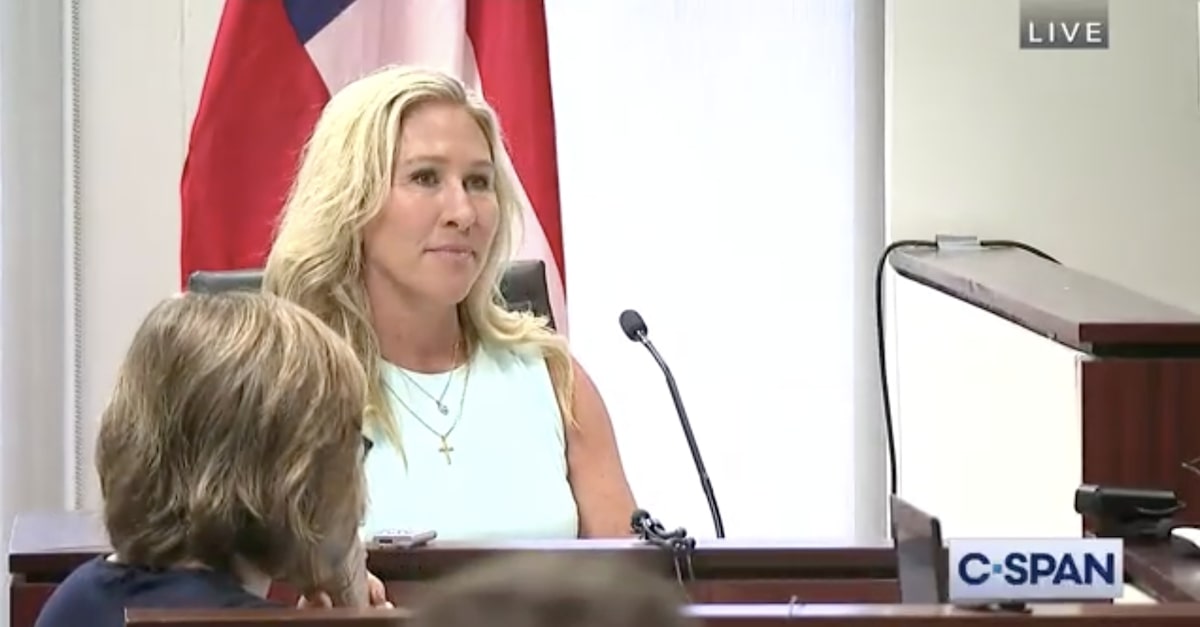 The next business day after her sworn testimony in a disqualification hearing, Rep. Marjorie Taylor Greene (R-Ga.) saw her text messages to Donald Trump’s ex-chief of staff Mark Meadows reportedly spill into the public domain on Monday. Certain messages published by CNN appear to cast doubt on her sworn statements that she made to remain in office.

In one, Greene apparently urged Meadows to goad Trump into declaring “Marshall law,” misspelling the phrase for the substitution of military authority for civilian rule. Greene insisted, under oath, that she could not remember whether or not she encouraged Trump to do that. Sen. Marco Rubio (R-Fla.), a trained lawyer, trended on Twitter a little more than two years ago for the same misspelling.

“Ms. Greene, did you advocate to President Trump to impose martial law as a way to remain in power?” an attorney for her challengers, Andrew Celli, asked her on Friday.

When Celli clarified that was not a denial, Greene affirmed: “I don’t remember.”

Green’s memory aside, the Trump loyalist from Georgia appears to have provided that advice as a factual matter.

In a message dated Jan. 17, 2021, Greene reportedly wrote: “In our private chat with only Members, several are saying the only way to save our Republic is for Trump to call for Marshall law. I don’t know on those things. I just wanted you to text him. They stole this election. We all know. This will destroy our country next. Please tell him to declassify as much as possible so we can go after Biden and anyone else!”

Greene’s attorney James Bopp, a GOP stalwart behind the Citizens United decision and a suite of quickly withdrawn 2020 election challenges, did not immediately respond to Law&Crime’s request for comment. Neither did Celli.

Legal expert Mitchell Epner, a partner at Rottenberg Lipman Rich PC, noted that falling back upon a purported lack of memory during testimony typically insulates people from accusations of perjury.

“It is very rare for someone to be prosecuted for testimony that they don’t remember something,” Epner said. “This might be that rare case. Certainly, the proof is as strong as possible that she made the statement. The context makes it exceedingly unlikely she would forget. The question is whether the Georgia AG or local prosecutor has the will to prosecute.”

A communications director of Georgia Attorney General Chris Carr (R) did not immediately respond to an email requesting comment.

According to CNN, that missive was one of 2,319 text messages that Meadows sent and received between Election Day 2020 and President Joe Biden’s inauguration on Jan. 20, 2021. Other exchanges laid bare Meadows’s communications with daughter Ivanka Trump, son-in-law Jared Kushner and son Donald Trump Jr. They also exposed chats with Rudy Giuliani, “My Pillow” founder and CEO Mike Lindell, and Fox News host Sean Hannity, according to the report.

During Friday’s proceedings, Bopp depicted Greene as every much a “victim” of the Jan. 6 attack on the Capitol as others hiding out in Congress. One of the messages indicates that she asked Trump, through Meadows, to call off his mob of supporters.

“Mark I was just told there is an active shooter on the first floor of the Capitol,” Greene reportedly wrote. “Please tell the President to calm people[.] This isn’t the way to solve anything.”

Throughout Friday’s hearing, Greene claimed not to remember much about what she said in the lead-up to Jan. 6, but she insisted that her quoted remarks had been taken out of context.

The hearing, before Administrative Law Judge Charles R. Beaudrot, ended without a ruling.

Beaudrot requested further briefing from the parties before he issues his formal findings on the facts and law to Secretary of State Brad Raffensperger (R), who will determine whether Greene is “qualified to seek and hold public office.”